Wife Lila called me in Cape to ask if I had taken my big drill bits on my last trip north. She and Neighbor Bill wanted to make a paper towel holder since she had run out of napkins.

I started to say, “Why not….” when she interrupted and said, “NO. NO, I am NOT going to make one out of a plunger.”

For background: when I saw how much towel holders cost, I decided to Frankenstein a cheaper solution. Before I gave it much thought, I was walking through Dollar Tree looking for something else.

Suddenly, I saw the solution to my problem. The plunger cost me a buck, and all I had to do was saw off enough of the handle to get it to fit under my cabinet.

Maybe it’s not laziness that’s the mother of all inventions. Cheapness ranks right up there with it.,

A bunch of the Class of ’66 folks who came to Cape for their 70th Birthday Party reunion (because lots of them turned 70 in 2018), were hardcore Capaha Park Pool Rats (a description coined by Terry Hopkins).

They thought they’d take advantage of being in town to congregate at Jack Rickard’s house at the base of what used to be the Mississippi River traffic bridge.

Just about the time the pool was razed, I asked some of the former lifeguards and swim instructors to tell me what they remembered of their swimming days in the middle and late 1960s.

Wife Lila, Bill Jackson and Terry Hopkins shared some touching memories you can read at this link.

Many of the pictures in this gallery will be on exhibit at the Cape Girardeau County History Center across from the courthouse in Jackson. The museum is open Monday through Saturday from 10 to 4. The exhibit will be up until around the end of October.

Some of the prints are available for purchase there.

Click on any of the photos to make it larger, then use your arrow keys to move around.

Wife Lila and some of her friends threw together an impromptu 50th class reunion in 2016. They realized that most of them are turning 70 years old in 2018, so it was a good time to have a 70th Birthday Party.

Marilyn Maevers Miller of Charleston and the Class of 66 Lunch Bunch handled the local logistics and provided excellent eats.

The classmates gathered at an outdoor pavilion in South County Park Friday night. The photo shows about 50 attendees, and even more might have missed being in the group shot. Click on the image to make it large enough to see faces. Anyone who appears in the group shot above has my express permission to reproduce it for personal use.

Bill Jacqie Jackson brought his karaoke equipment from his South Florida post-retirement job, and attracted an active group of “singers” toward the end of the evening.

The good thing about attending a group 70s Birthday Party is that all of the people who would yell, “Turn that music down!” are AT the party.

A cold front moved through on Saturday, so Bob Ward offered up space in the Elk’s Club to get the group out of rain and cold winds.

Earlier posts about other CHS reunions 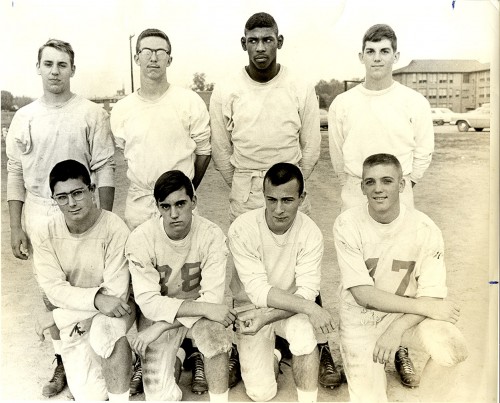