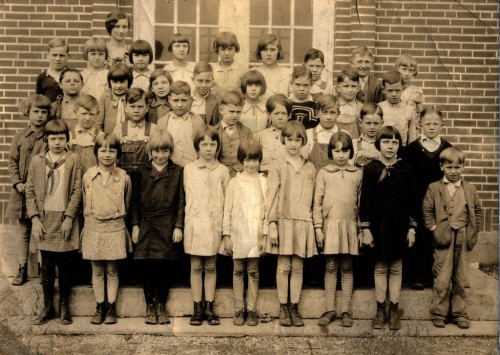 September 3 is the Advance Hornet Alumni Banquet. My grandmother, Elsie Adkins Welch, and my mother, Mary Welch Steinhoff, were Advance High School graduates. Mother was in the Class of 1938. When I was home a few weeks back, she pulled out an old scrapbook I’d never seen before. In honor of the reunion, I’ll throw up some of her class photos. (Click on any photo to make it larger.)

Mother thinks this was her third or fourth grade class. She’s in the front row, third from the right. She recognizes her “fancy” socks. Fern Sample is to her left in the photo; Bonnie Jenkins is on the right. 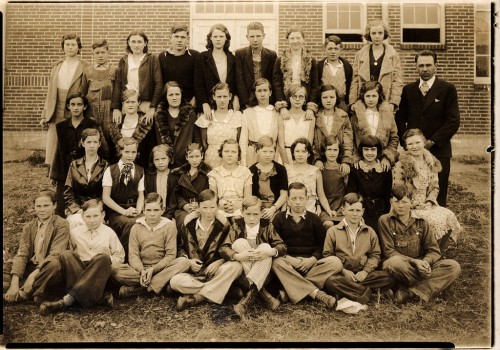 This is a photo with a mixture of classes in it. Mother is fourth from the right in the second row. The teacher in the dark suit at the right was Mr. Tippitt (Tippett?). “I didn’t much like him, she said.

I find the picture interesting from a photography standpoint. If you look at the right-hand size, you can barely make out some words at the edge of the frame. That’s an indication that it was a contact print made from a 5″x7” negative. Most photographs were made on smaller film and then enlarged. 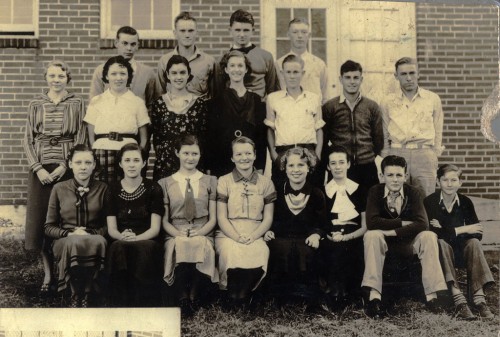 One of the pages in Mother’s Senior Memory Book was labeled Juniors / Seniors. This was the photo associated with juniors. If she was in the Class of 1938, this would have been taken in the 1937 school year. She is in the front row, third from the right.

I really like the girl in the front row, third from the left, with the tie and the mischievous grin. 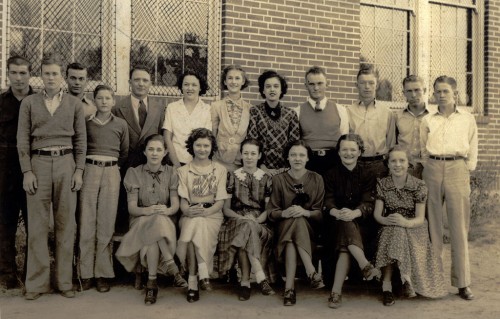 This is labeled Seniors, so it must be the Class of 1938.

She’s third from the left in the front row. Check out the “A” belt buckles on the two boys standing at the left. The boy in the back row, fourth from the right is sporting one, too. I wonder if they were the Advance version of a letter sweater? Note how they are all wearing sweaters, but they are careful to have them pulled up to display the the buckles. 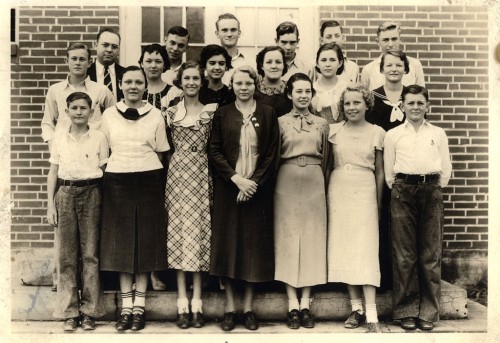 She thought this must have been an upperclass photo, but she couldn’t be sure. She’s third from the right in the front row. 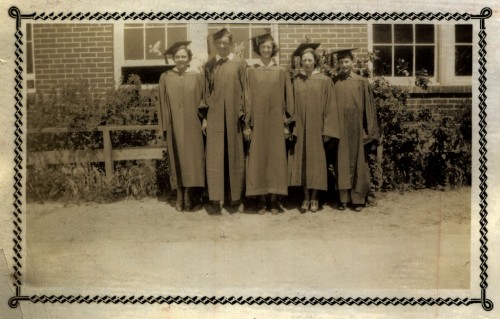 This must have been the Class of 1938 in their caps and gowns. It looks like there is a hornet in the window pane on the left. Mother said her class was the one that came up with that as the name for the school’s mascot. She’s second from the right in this shot. 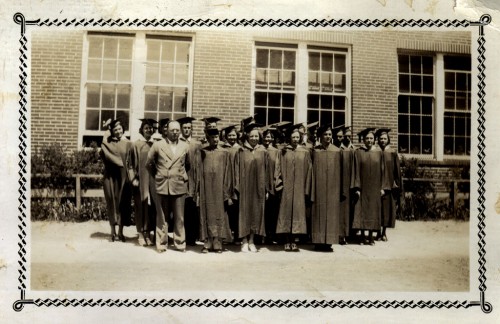 This is a larger group shot. She’s to the right of the middle in the front row. (She had a knack for getting in the front of photos, even then.) Mother hasn’t decided if she’s going down for the reunion. She doesn’t think there are many of her class left.

Here are the birthday pages from her Memory Book. We’ll have more of her scrapbook photos coming up if there are enough Advance readers to make it worthwhile.

9 Replies to “Advance School Photos from the ’30s”