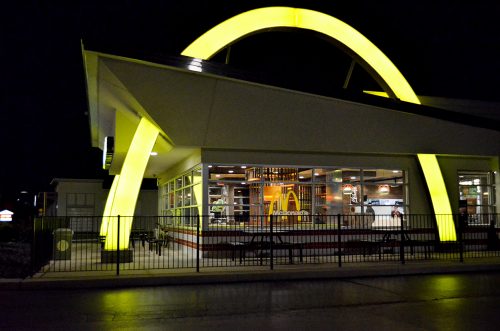 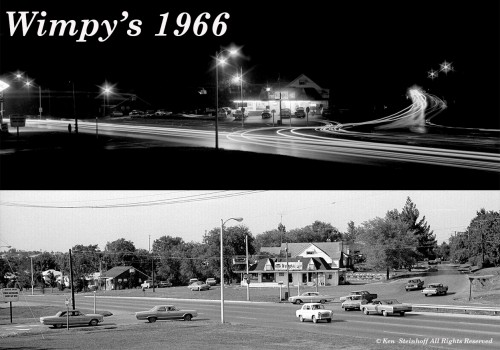 If you were lucky or quick enough to get one of the 600 tickets to September 19th’s Wimpy’s Day at the Centenary United Methodist Church, look for me if you’d like a photo of what Cape’s iconic hangout looked like in the day and night of 1966. An 8-1/2 x 11″ print will go for $5 (with 10% of net going to the church).

Here’s one in the stack 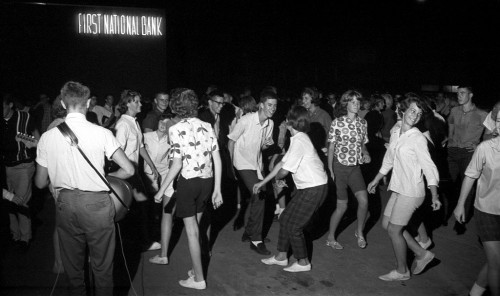 I’ll also have a bunch of 11 x 17″ photos from Cape, Perry and New Madrid counties for you to look through. I know you’ll recognize SOMEBODY in at least one of them. I’m tired of hauling them around, so I’ll part with those for $10 each. Here’s where this photo was taken. Click on it to make it large enough to see if you were dancing in the bank lot.

I get lots of requests for info and photos of Wimpy’s, Pfister’s, A&W Root Beer and, less frequently, Dog and Suds. The first three are long gone, but I had a nagging suspicion that the green building at 605 North Kingshighway, just south of the entrance to Arena Park, might be the latter.

While Mother and I were rambling about, I said, “I’m going to pull in, shoot first, then ask questions later.” And, I did.

Walking in the door, I told a guy that his hair didn’t look gray enough to know the answer on his own, but that he might have heard from someone else if this building had once been the Dog and Suds. He confirmed it had been. (By the way, The Missourian spelled it as Dog and Suds, not “Dog ‘n’ Suds,” the way I thought of it.

That building had been used for lots of different things.