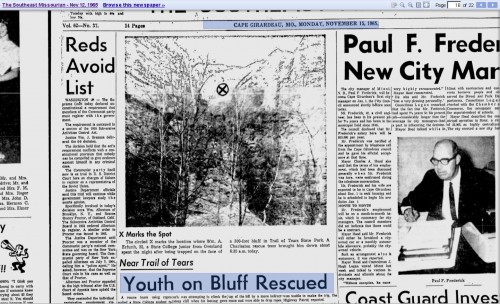 Early the morning of November 15, 1965, I got a call from The Missourian to saddle up my pony and head to the quarry at Trail of Tears State Park to cover a rescue. It must have been too chilly or too early for them to roust Frony out of bed.

I know I saw the negatives from that morning somewhere recently, but I must have misplaced them. I’ll make do with a copy of the front page of that day’s Missourian. Someone other than me drew in the X and apparently “enhanced” the tops of the bluffs. Or, it might just be that the microfilm reproduction makes it look that way.

The Associated Press picked up the photo, probably because of the St. Louis connection. I think it might have been my first Wirephoto. I was excited about it in those days. I was less excited 20 years later when they were still paying a lousy five bucks per photo. 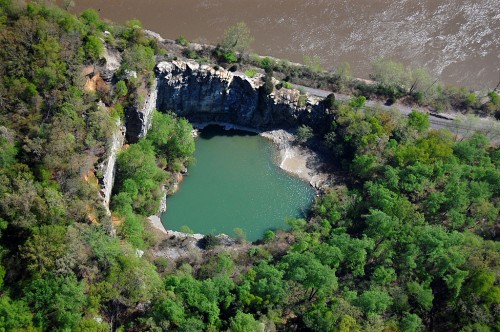 You can read the whole story in The Missourian,but you have to work for it. The Google index is messed up, so that link takes you to the November 12 edition. You’ll have to keep scrolling to the right until you get to the front page of the Monday paper. While you’re scrolling, you might want to pause to read the Nov. 13 account of the fire and sinking of the cruise ship Yarmouth Castle. Gordon Lightfoot immortalized it in Ballad of Yarmouth Castle on his Sunday Concert album, arguably his second most famous song after The Wreck of the Edmund Fitzgerald.

Here’s the short version: William A. Erfurth, 22, a SEMO junior from a St. Louis suburb was trying to scale a 300-foot bluff north of Trail of Tears State park on Sunday when his footing gave way. He managed to scramble to a rock about 60 feet from the top of the bluff where he was stuck for about 13-1/2 hours until he was rescued the next morning.

A buddy, Don Powers, 25, of Webster Groves, who didn’t make the climb, built a fire and kept talking to Erfurth though the night. It took longer to get help than it might have because Erfuth’s keys were lost in a comedy of errors. Erfurth had the keys with him up on the bluff. He threw a small rock down so that Powers would have an idea of where to look for the keys. He then wrapped the keys in a handkerchief and threw them down. “They haven’t been found yet,” Erfurth commented. That meant that Powers had to walk out for help. 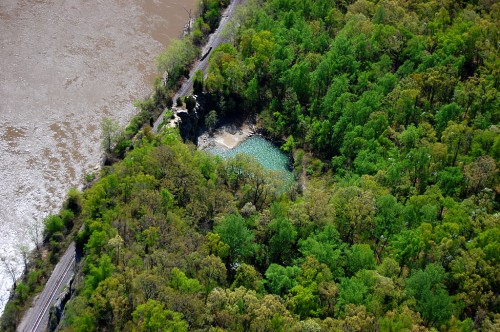 A Mississippi County Rescue Squad eventually made it to a point where they could drop ropes to the stranded youth. The climbers included Joe Lankheit (or Lankhett), Mike Bryant, Dewey Bickford and Ralph Carr. Chief Sam Story said the ascent was made at “considerable hazard” to the four men.

Besides the Sheriff’s Patrol and the Mississippi County unit, members of the Highway Patrol and the Cape Girardeau Auxiliary Police were on scene during the night. Robert Eckelmann, auxiliary chief, said he and Frank Maevers tried to reach the top of the bluff by jeep, but the terrain was too rough. Erfurth was unharmed.

The cliff is located about 1-3/4 north of the end of the Moccasin Springs Road. Most of the rescuers rode to the scene by handcars of the Frisco Railroad. (I don’t remember if I got a ride on a handcar or if I had to hoof it.)

Quarry looks pretty from the air 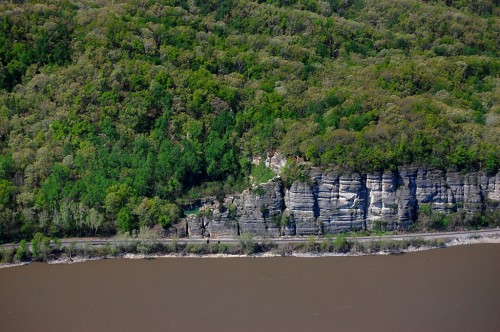 I asked pilot Ernie Chiles to fly close to Trail of Tears on our way up to Perry County in April to see if I could spot the quarry. It was much bigger than I had imagined. That early morning in 1965 was the first (and last) time I had been there. I’m going to hazard a guess that some of you have been much closer to it than I’ve been.