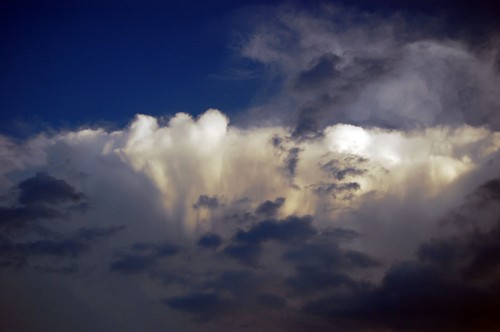 Here are the clouds we spotted just before heading out to the new Central High School stadium to see if it would make a good foreground for a sunset photo. I’m glad we discovered the Marching Band practicing there, but I would have been satisfied with some cloud photos. This was due south when we climbed into the car. [You can click any of the photos to make them larger.]

Cloud was boiling and growing 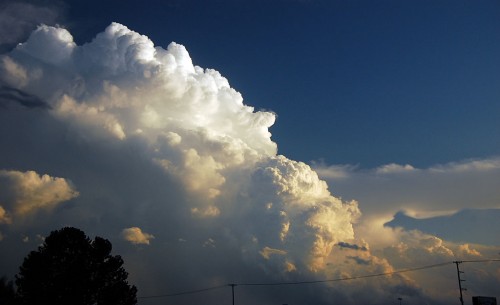 Second by second, this massive white mass was boiling and growing larger. It was neat, but I wanted something more interesting in the foreground. In Florida, there are always palm trees handy. Palm trees are a cliche, but even cliches can make a nice photo.

Wife Lila was driving and she cautioned that I should shoot what was in front of me because the light was changing so quickly that the magic might leak out. I’m usually the one saying that, so this was a real role reversal. 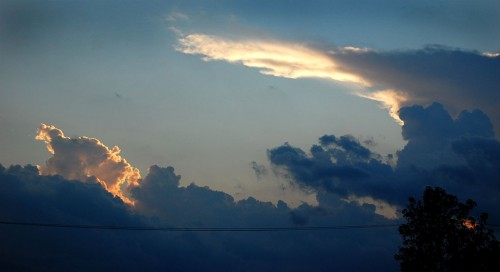 She was right (as always), though. The sun was getting ready to go down. As soon as that happened,  the wonderful white highlights would go away. Still, I thought there might be a better shot elsewhere. 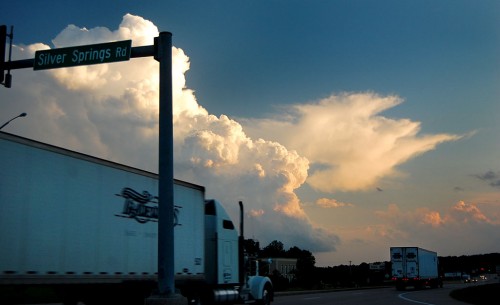 Normally I would have hated to have been stuck at a long red light, but this gave me a chance to experiment with the clouds and passing truck traffic at Silver Springs and Shawnee Parkway. The composition isn’t quite what I would liked to have had, but the red light changed to green before a truck with his side running lights could streak by with another truck in front of him. I have to confess I was hoping that the guy in the foreground who hadn’t turned his marker lights on would get ticketed by a cop, but I don’t think the charge of aggravating a photographer is in the state statutes.

If I hadn’t been convinced that there might be a better shot at the high school, I’d have stayed here to work on a little nicer photo. The elements were there, just not in the right combination during this light cycle.

5 Replies to “Cape Clouds at Sunset”