Brad Elfrink in his workshop 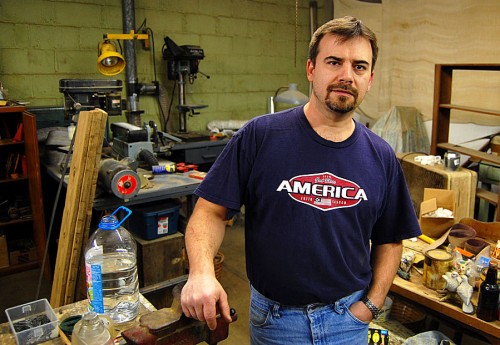 Cape is a place that overlaps and interlocks. My friend and former co-worker, Jan Norris, asked me if I’d meet up with Brad Elfrink while I was in Cape. He does beautiful “whimsical hand crafted collectibles” that she wanted photographed for her button site.

Brad and his wife live on Sprigg St., just down from William, which is why I photographed that corner for a recent page.

He and I talked about local landmarks that have quietly disappeared. I told him I had been looking in vain for a unique house in the neighborhood that I photographed in the 60s. He broke the news that it had been torn down, but that he had some of the decorative bricks from it in his back yard. (More about Brad and that on that another day.)

I mentioned that I sort of “found a way” into the nearby boarded-up St. Francis Hospital just before it was torn down. I wanted photos of the interior (and to make off with the room number tag off  the room my mother was assigned after I was born).

“Do you recognize these rocks?” 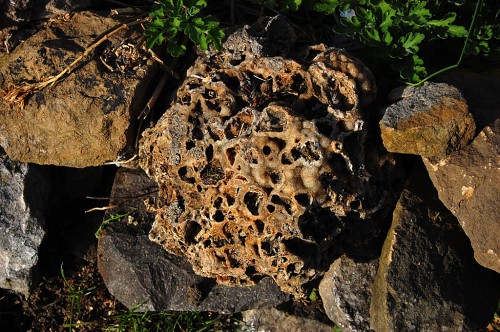 “Do you recognize these rocks?” he asked me.

I took a wild stab and said, “Did they come out of the grotto in the gardens behind the hospital? I always thought that was neat.” 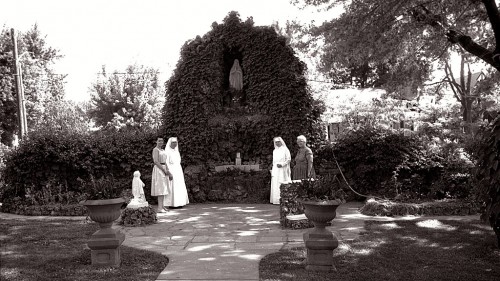 Yep, Brad saw it being torn down and scavenged a few rocks for future use.

The photo above of the grotto was in a film sleeve slugged Nun Circus, with no date or other info. From a technical standpoint, the frames were overexposed and overdeveloped, which caused the whites to block up to the point they were almost unprintable.

I’m going to put up a photo gallery of the “Nun Circus” and some of Brad’s recovered Grotto rocks. I apologize for the quality of the black and whites. I rationalize that their historical value may outweigh their poor quality.

Click on any photo to make it larger, then click on the left of right side of the image to move through the gallery.

Friend in Florida with no connection to Cape puts me in contact with an artist who just happens to have salvaged pieces of two buildings I had photographed in the 1960s. Things related to Cape don’t have Six Degrees of Separation. You can make the connections in no more than two or three.