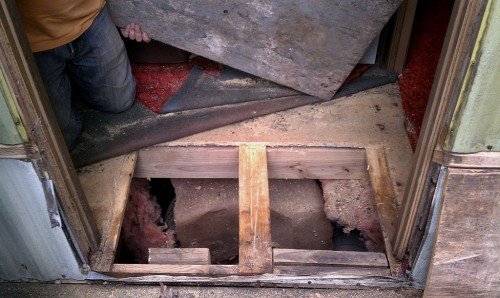 Brother Mark reminded me – nagged me might be a better word – that we should go over to Kentucky Lake and do some work on Mother’s trailer. She hadn’t been over there this season after having a major plumbing overhaul done last fall, and we needed to see if the plumbing leaked (it did). Some soft spots had developed in the floor over the years, the worst one being by the door leading to the kitchen. It wasn’t dangerous for mother yet because she barely weighs her age (90 in October of this year), but not all of us are that light.

My adage is “Never look beneath the skin of an old structure. Nothing good is ever found there.” Mark, who must have been watching a lot of hospital movies, didn’t hesitate. He took the scalpel and made the first cut into the carpet. It didn’t look good. Not knowing how trailers are constructed, I was afraid we’d be replacing a big chunk of floor before we got to the good stuff.

As it turned out, it WASN’T that bad. I’m proud to say that the ancient piece of plywood I cut fit the hole on the first try. The best part is that there are no blood splatters on it. There were many summers that a trip to the emergency room was part of the entertainment. 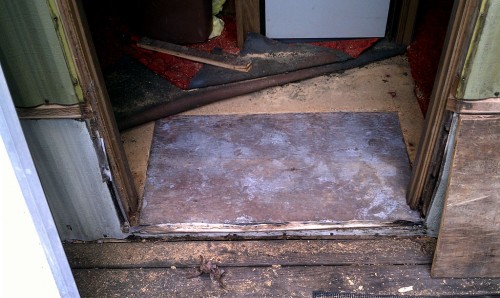 That plywood brought back some bad memories, though, of the summer I worked for Dad as a laborer.

One of the least favorite tasks was unloading truckloads of those 4×8-foot, 3/4″ plywood sheets that had been used as concrete forms. They had been sprayed with “form oil,” which was designed to keep the concrete from sticking to the plywood. It soaked into the wood and made it super heavy, not to mention awful to handle. Where the concrete HAD stuck to the wood, you had to take a wire brush and get it all off. After that, you used corks to fill the holes drilled into the wood to tie the forms together. The sheet was then drenched in form oil and stacked, usually onto shelving that was above my head.

Here’s what happened on a date night after a day of humping plywood forms.

When I looked at this piece of plywood, I wondered if I was the guy who had driven the corks that were still sticking in it. 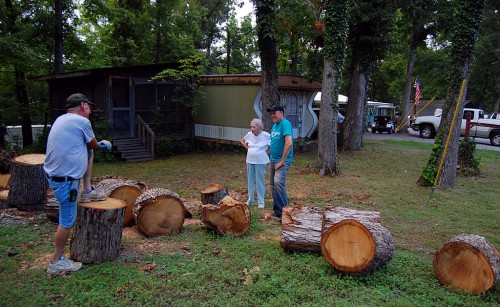 Just before leaving, Mark and Mother talked with our neighbor who was chopping up a tree for firewood. It had narrowly missed hitting Mother’s trailer when one of the spring storms blew through. 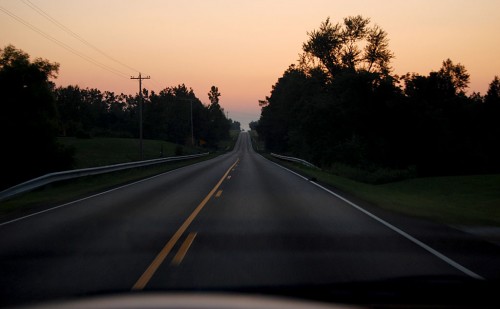 By the time we got something to eat (we had planned on the Catfish Kitchen, but there was a 40-minute wait), it was getting dusk. As we were heading back across a nearly deserted Kentucky 121, I liked the way the road looked. I didn’t know the dark object on the fog line was a skunk until we got a whiff of it. I’ve shot some photos that were stinkers, but I’m pretty sure this one smells for real. 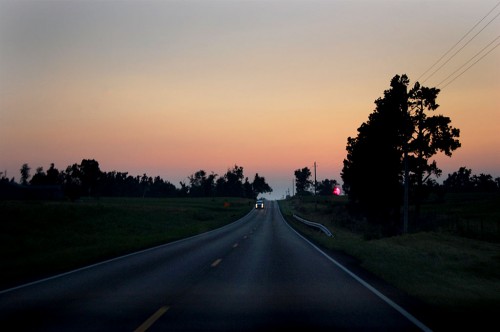 We were heading almost directly in a big, beautiful sunset, but every time I’d raise the camera, either we’d meet a car or a tree would block the shot. Finally, I fell back on my old saying, “Some days you make photographs; some days you settle for memories.” This one is somewhere in between. 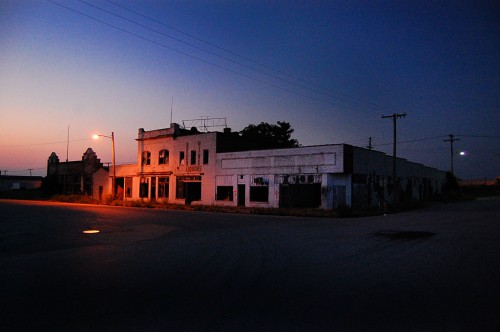 It had just turned Dark O’Clock when we crossed over the Ohio River into Illinois. I told my passengers that I had never photographed Cairo at night. (That’s not exactly correct. I DID shoot the riots there in July of 1967, but it’s not quite the same thing.)

Mother, of course, used her standard line, “Aren’t you afraid somebody is going to knock you over the head?”

“No, Mother, I’m not afraid someone is going to knock me over the head. Somebody has to BE here to knock you over the head. Do you see anyone standing around waiting for a van with a Florida photographer in it to pull up so they can knock him over the head?” There were so few people out that even the mosquitoes had died of starvation. 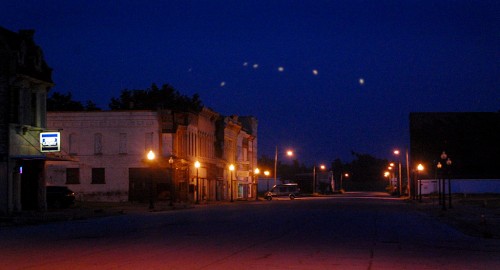 The streets were dark except for patches of light from streetlights, so it was hard to tell what I was shooting. When I looked at the camera display after taking the photo, I noticed a staggered row of lights in the sky. My first thought was that they were on the Ohio River bridge. When I got home, I had the lights show up in various places in 15 frames. Interestingly enough, similar ghost lights showed up faintly when I turned 180 degrees to shoot north on the street.

I’m open to speculation, but I’m going to say what some folks would claim as unidentified flying objects were some kind of internal reflections in the camera lens elements brought about by the bright streetlights contrasting with the dark sky. 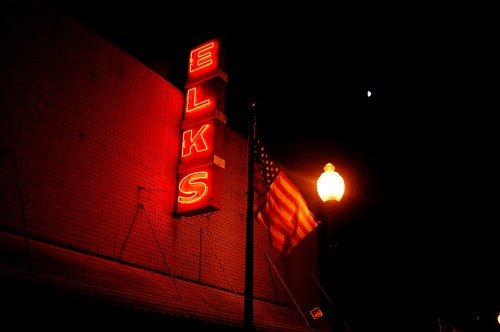 The only sign of life on the east side of the main drag was at the Cairo Elks Club. The neon Elks sign, the Flag and the streetlight made a nice combination. The moon up and to the right of the street light was an added bonus. I’d like to say I saw it, but I was so busy trying to get the right exposure and to wait for the wind to riffle the flag that I didn’t notice it.

P.S. Nobody got knocked over the head.