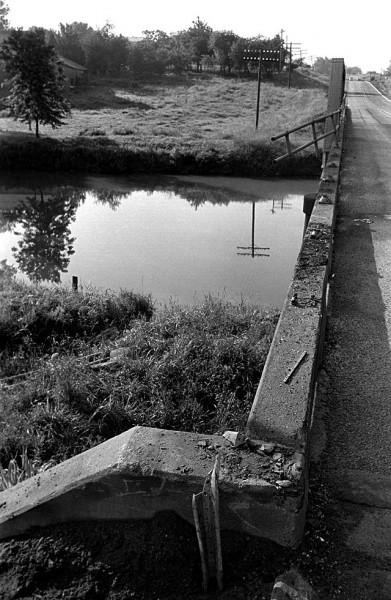 Missourian webmaster James Baughn and author of The Pavement Ends blog, had a story headlined “The Death Trap at Old Appleton will soon be demolished.”

He did a great job of telling the history of the bridge and the paper’s campaign to get it replaced. I won’t plow the same ground, I’ll just encourage you to read his blog. By the way, you can click on any of these photos to make them larger. 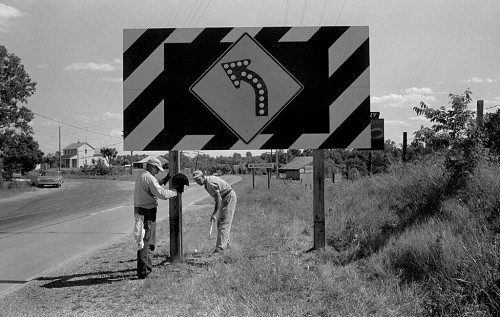 The story hit home for me because a lot of the pictures that were used in the campaign were ones that I took. I don’t know if One-Shot Frony didn’t want to run the spot news or if he was out of town, but for some reason, I was the designated Old Appleton crash photographer for a number of months.

Despite front-page coverage and editorials, about all we accomplished was getting some warning signs posted in advance of the bridge.

Danger could sneak up on you 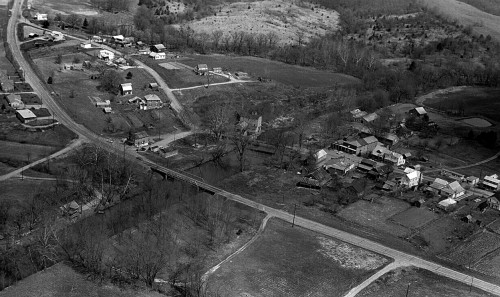 In the 1965 aerial photo above, Hwy 61 curves from the top left to the bottom right. The old highway passed through Old Appleton and crossed Apple Creek at the mill next to the old bridge. The Silver Dollar Tavern is located just north of the bridge.

As James points out, the bridge doesn’t look dangerous from a distance. A combination of things made it hazardous, particularly for out-of-town drivers. First, it’s located on a curve at the bottom of a downhill stretch of road. It was too easy to build up speed going down the hill, find the curve was sharper than it appeared and overcompensate.

Adding to the danger was the “lip curb” design of sections of Hwy 61. Instead of being flat, the sides of the road had a slightly inclined curb. Periodically, the curb was broken by V-shaped drains. If you weren’t paying attention or needed to get as far to the right as you could, it was easy to ride up on the curb. Your first instinct was to pull the steering wheel back to the left, which would send you careering over into oncoming traffic. 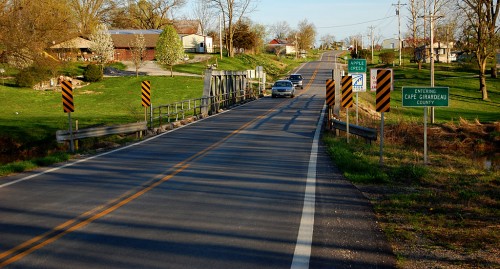 If you did that while coming up on a drain, you would find yourself riding up, crashing down and then bouncing into the air when you hit the high side of the curb again. Loss of control and blown tires were common. The highway was repaved over the years, bringing the roadway even with the curbs, which eliminated the danger, fortunately.

Of course, folks who have been raised on Interstates and cruise control don’t know what a trip to St. Louis was like in the Old Days. 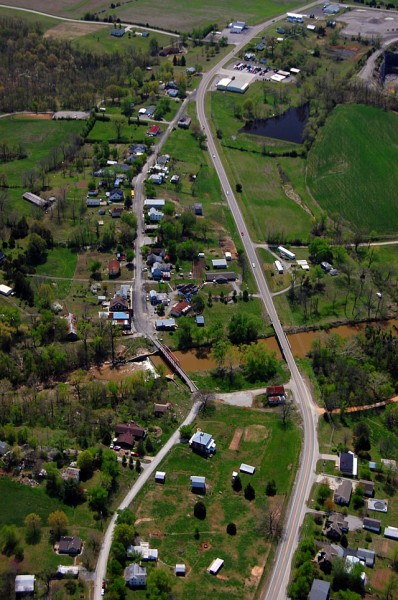 U.S. Highway 61, running between Chicago and New Orleans was a curvy, narrow road with steep grades by today’s standards. The speed limit was 70 miles per hour, so you were closing with oncoming traffic at 140+ miles per hour with no median or safety cable to keep you apart.

On top of that, because the trucks of that day were so underpowered, a heavily loaded truck could back up traffic for a mile or more. Eventually, somebody would ignore the double yellow line and pass on a hill or blind curve, with disastrous results. Remember, cars didn’t have seatbelts, crumple zones, airbags, collapsible steering columns or padded dashed. Kids rode standing up or stretched out in the rear window deck.

When people say, “they don’t build them like they used to,” they’re right. Today’s cars are designed to crumple so that the sheet metal absorbs a lot of the impact. Those solid steel frames and heavy bumpers insured that the crash energy was transmitted directly to the occupants, who frequently became unguided missiles.

Vehicles would crash through guardrails 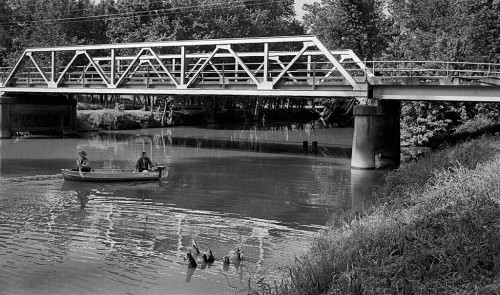 Several times over they years, cars and trucks would go over the side of the Old Appleton Bridge. I’m not sure exactly which wreck this one was, but the trooper and a volunteer are looking for someone who plunged into Apple Creek. The police report said the southbound driver ran up on that lip curb I described, overcompensated when he tried to pull back on the road, then broke through the east guardrail.

I’ll never forget one crash. Not because of what I saw at the scene, but what happened after I got back to the office. If I remember correctly, they had recovered one body and identified the driver, but there was concern that there might have been a passenger in the car who was unaccounted for.

“Was anybody riding with your brother?” 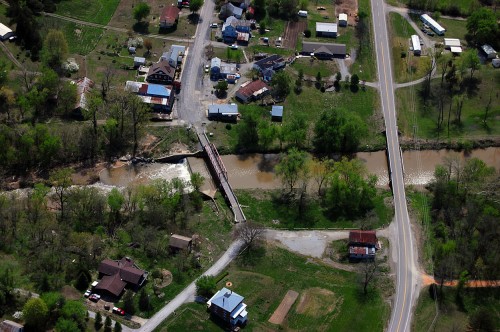 I was coming up on a hard deadline and decided to show a bit of enterprise. Since I had the driver’s name and since quite a few hours had gone by since the crash, I assumed that the family had been notified. I found out the name of the driver’s brother and called him. “Do you know if anyone was riding with your brother?” I’d like to think that I didn’t finish the sentence with “when he went over the bridge,” but I’m afraid that I probably didn’t stop in time.

There was a pause, and the man asked, “What do you mean?”

I apologized for my call and said someone would be contacting him soon. I hung up as quickly as possible and called the highway patrol to suggest that they might want to speed up their notification calls. I never did that again.

That was the second-worse call I handled at The Missourian.

The worst phone call of all

The worst call came in when I was filling in as news editor handing the AP wire copy. Back in those days, people relied on the newspaper for news, so a phone call asking about a news story wasn’t unusual. 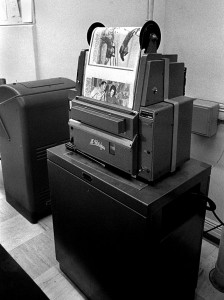 When the phone rang on my desk and an elderly man asked if I happened to know the flight number of the airliner that had crashed, I didn’t think twice about swiveling around to grab a piece of wire copy off the teletype and casually saying, “”Sure, it’s flight number 1234.”

There was a sharp intake of breath and the man said, “My granddaughter is on that plane.” The next thing I heard was the sound of the phone dropping and a “bonk, bonk, bonk” as it bounced at the end of its cord against the wall.

A better newsman would have stayed on the line on the off chance that someone would pick up the phone and he’d have a chance to interview a family member.

I put my handset back on the cradle and went in to tell editor John Blue that there might be a local angle to the crash story. Then I told him a fib, “The man hung up the phone before I could ask him any questions.”

Sorry, Mr. Blue, for the fib. I’d like to think you would understand.