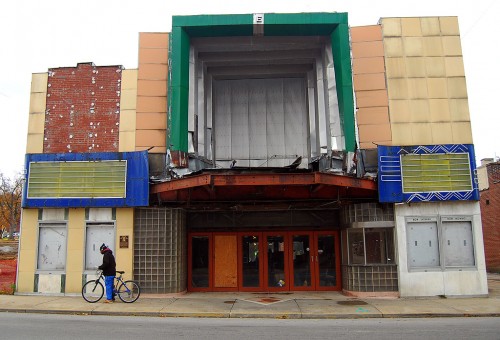 Cape Girardeau’s Esquire Theater opened Jan. 21, 1947, to 1,300 customers in two showings. A block-long line of moviegoers were treated to a double feature of Blue Skies and Two Years Before the Mast at 6:15. A late crowd caught the 9 p.m. showing.

It was the third of Broadway’s theaters – the Rialto and the Broadway were the others – to open. Within 18 months of each other, all three were closed by 1985. The Esquire was the last to go dark.

There’s a lot of interesting reading in the National Register of Historic Places registration form filed in 2005. [This link takes you to a pdf file that may require a special plugin for your browser.]

Windstorms and a truck accident damaged the marquee 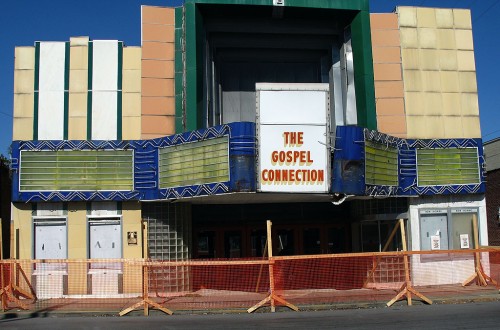 The city blocked off the sidewalk in front of the movie theater when the marquee was deemed unsafe. This photo was taken Oct. 24, 2007, before it was removed.

The Esquire experienced a brief revival on Mar. 22, 1985, when it opened as a second-run movie theater, charging $1.50 a head, but it closed again in December of that year. A church held services in the building for a time. It’s being used for storage today.

When it was built, the local newspaper said that it had more than a mile of neon lights, more than any other theater in the South. Sometimes boosterism collided with facts, so this may or may not have been exactly true. 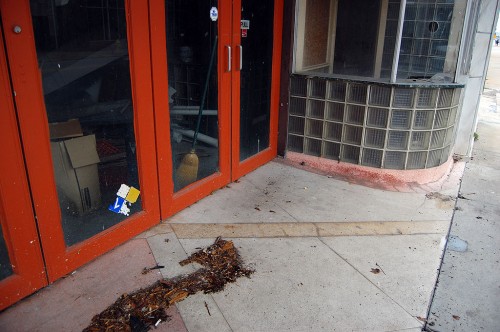 The National Register application says the interior of the theater retains its original space configuration of lobby, foyer, auditorium, restrooms and projection room. Many of the original interior finishes, including the mosaic tile and painted designed walls in the auditorium remain. The original seating and screen have been removed.

The multiple-colored terrazzo floor of pink, gray, buff and green blocks in a geometric designs runs up to the red doors and into the lobby.

Curved glass blocks guide you into the entrance 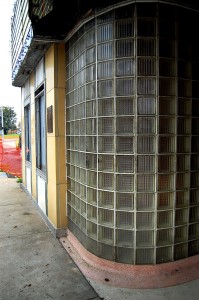 The gently-curving glass blocks that guide you into the entrance of the of theater are a characteristic of the Art Deco style of architecture. Other Art  Deco touches are the use of steel, marble, colored steel enameled panels and curved walls.

When construction started in 1946, the projected cost was $75,000. By the time it was finished, the total cost had doubled to $150,000. Gerhardt Construction Company of Cape was the general contractor. Preston Neon Sign Company installed the neon lighting.

Few homes had air conditioning in the Esquire’s heyday, so Cape Girardeans took refuge in the movie houses during scorching summers. A heating and air conditioning system installed in the basement was powerful enough do a complete air exchange in the theater every minute.

The 100′ x 60′ building used no lumber in its construction to make it as fire safe as possible. 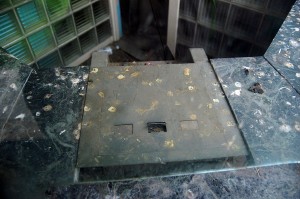 When you finally made it up to the ticket window, you would speak to the cashier through a hole in her glass window, tell her (it was always a woman) how many tickets you wanted and for what ages. She would push some magic button (I don’t know if it was hand or foot-operated) and the requisite number of tickets would come shooting out of slots in the top of the counter.

The apparatus is still there, but it’s been heavily decorated with bird poop over the years.

Help! The Beatles movie played the Esquire in 1965 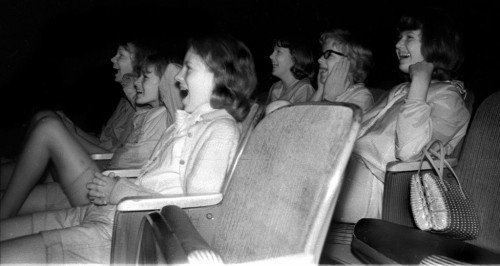 I wrote earlier about ordering special infrared film and flashbulbs to cover the teenybopper reaction to the Beatles movie Help! when it played at the Esquire in September 1965.

You can read the whole account at this link. Who knows? You may see yourself in the audience.

Did you ever try to sneak in through the fire exit door? 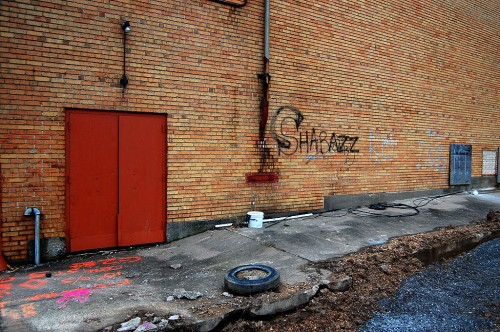 And, if you did, were you caught by one of the male ushers (they were always male) who prowled the aisle maintaining order. Hint: it was a Bad Idea to sneak in during a daytime movie. The blast of bright daylight was sort of noticeable in the darkened theater.

Do you miss those days when unruly patrons were shushed or ejected?

Did you work at the Esquire?

Were YOU an usher, cashier or concession stand worker? Based on the stories that Wife Lila tells from her days as a cashier at the Rialto, I bet you have an experience to share.

Here’s a gallery of Esquire photos

Click on any image to make it larger, then click on the left or right side of the photo to step through the gallery.