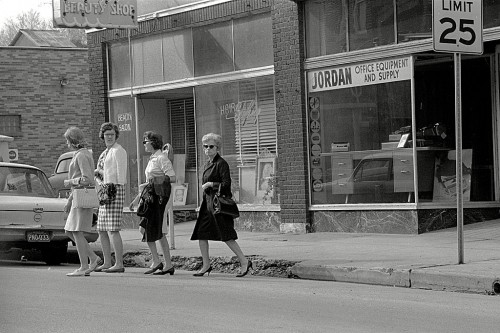 I don’t know if these women were leaving the DayZy Beauty Salon or Jordan Office Equipment and Supply. I suspect the former. The 1979 City Directory said the beauty salon was at 718 Broadway and owned by Mrs. Dorothy Willman.

I called them “women” because Missourian style was that females of a certain age were “women,” because that was a verifiable fact. “We don’t KNOW if they are ladies,” it was drilled into me.

These photos were in a sleeve slugged “Cracked Sidewalks 3/27/67.” There were some other photos in it, too. Wife Lila was in The Missourian’s print shop, where The Capaha Arrow was on the press, and I had a couple of shots of Jim Stone from a trip to the Ohio University campus. The variety of the photos makes me think the date was when the film was processed, not when it was taken.

I don’t know if I shot the sidewalks on assignment or on the off-chance that I could turn the photos into a story. There was a difference. At some point Editor John Blue or someone in the business office must have discovered that they weren’t paying me much salary ($50 a week to start and probably around $70 a week by the time I left), but I was making about half that much again in freelance photos. That probably put me in the salary range of real, experienced reporters.

The solution: they changed my pay schedule. I got $5 for every ASSIGNED photo, but only $3 if the photo was self-generated.

That’s where I learned to think in terms of picture stories and multiple photos. A photo that contained all of the elements of the story in one picture was only worth $3 to $5. If I could find a way to tell the story in pieces, then it was more money in my pocket.

I understand how Frony became One-Shot

Oh, yeah, there was another catch. I had to pay for my own film, paper, chemicals and darkroom equipment.

Still, I was living at home and didn’t have many expenses outside gas, photo supplies and dates. Lila will testify that I certainly didn’t spend a lot of money on THOSE.

I used to drive the accounting department nuts because I’d go weeks without depositing my pay checks. Eventually, someone would come up and ask me to cash them so they could balance their books.

Trust me, that was the ONLY time in my life that happened. 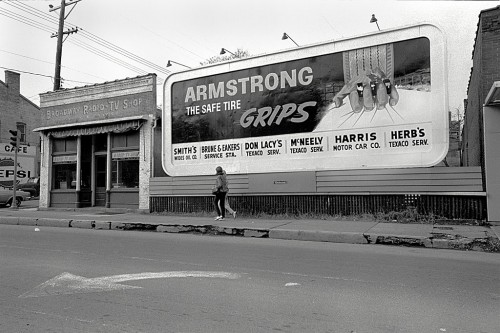 I could have used this photo with two stories. The Armstrong Tire ad would have fit nicely with the one dealing with the early days of the automobile in Cape.

It also shows a corner of the mystery building that was being demolished at the corner of Broadway and Sprigg in my Sept. 9 piece. Readers identified it as the Chris Cross Cafe. I don’t know that I was ever in the Broadway Radio-TV Shop. 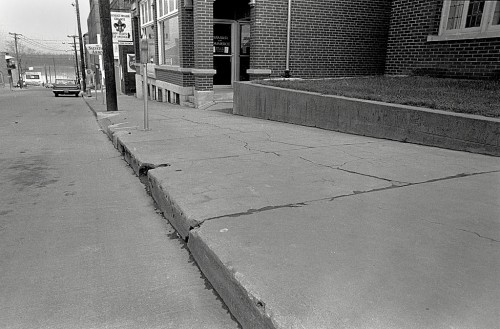 This cracked sidewalk photo in the 200 Block of Broadway picks up several landmark establishments: The Chamber of Commerce, the Boy Scouts of America and the Salvation Army. That’s my ’59 Buick LaSabre station wagon facing the river.