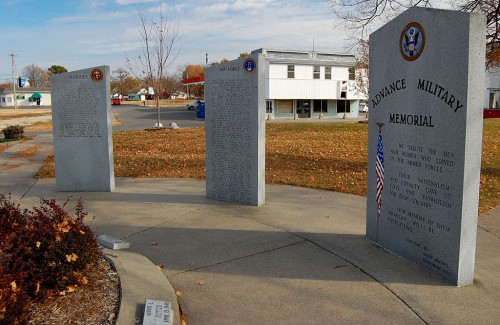 On Memorial Day weekend, it’s appropriate to recognize salute the men and women who have served in our armed services to keep us free.

Advance has a Military Memorial in Maberry Park on the town square that lists Advance residents who made the ultimate sacrifice for us.

Advance High School sophomore Kathy Jenkins wrote these words which were engraved on a stone tablet in the park: “We salute the men and women who served in the armed forces. Their nationalism and loyalty gave us love and patriotism for our country. Our memory of their bravery will be everlasting.”

The memorial is a nice tribute, but that’s not what fascinates me about the park.

This tree probably knows the secret 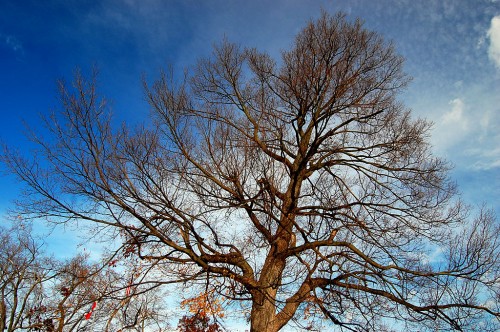 This tree overlooking Maberry Park may know the real story of the town square. I mentioned in a story about the Advance train depot that Advance was founded when Louis Houck balked at paying $30 an acre for a depot in Lakeville. He instructed his civil engineer, Major James Francis Brooks, to “advance” about a mile west near a stand of mulberry trees and lay out a new town where he could buy the land for $10 an acre. That’s where the town’s name, Advance, came from. 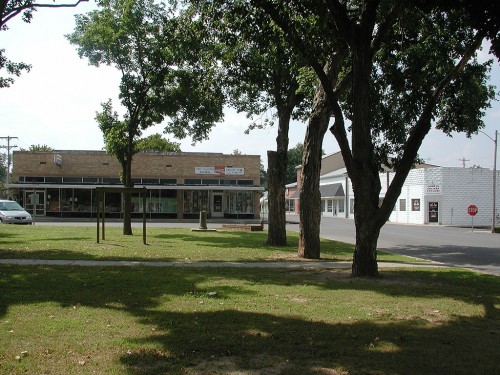 The land was originally owned by Joshua Maberry, and his family cemetery was located right in the middle of what was going to become the town. According to the sale agreement, the cemetery was supposed to be “forever maintained.”

This aerial taken last fall shows the square where the Maberry cemetery was located. The stones you see aren’t tombstones, they are the Advance Military Memorial markers.

Sometime in the 1920s, all of the tombstones disappeared from the cemetery in the middle of the night. The graves are all still there, but any visible trappings of a graveyard vanished. Poof.

No one in town claimed any knowledge of what happened to the stones. Thomza Zimmerman, long-time family friend and editor of The Advance Advocate, said the theft was attributed to a women’s group which concerned itself with the “beautification of the city.”

In Advance, Missouri, A Look at the First Hundred Years, she wrote, “By that time (1920), the first and second generations of Maberrys were gone and any heirs who remained had moved away, but they (the Mayberrys) still owned the cemetery. When W.H. Whitwell and his wife, Mary Jane, bought the estate of Joshua Maberry in 1879, the deed reserved one acre of ground, ‘used as a graveyard.’

“Be that as it may, on a certain summer night, in the early 1920s, all of the gravestones disappeared. No one knew where they went or how they went. Many people wondered, but few asked.” 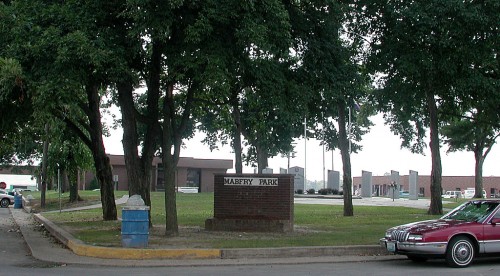 Mother and my Grandmother were about as connected as you could get in a small town, but they always claimed they had never heard who was responsible for the tombstone thefts, and I’ve never heard any of the oldtimers fess up. It has to be the town’s best-kept secret.

I had never looked closely at this photo I shot in the fall of 2001. Not only did all of the tombstones disappear, but whoever put up this sign in the square labeled it “MABFRY PARK,” not Maberry Park, after the original family.

I’ll have to check to see if the sign has been corrected.