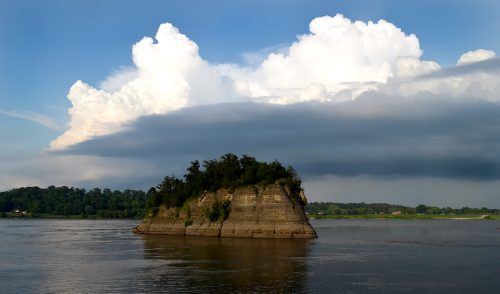 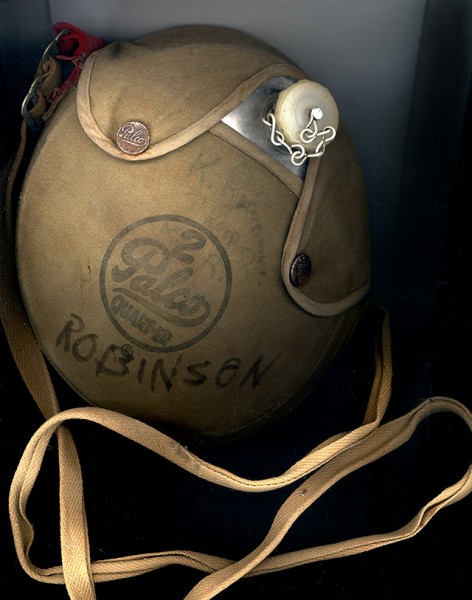 Thursday was a pretty productive day. Back in 2013, I wrote about finding Keith Robinson’s Boy Scout canteen. Mother kept bugging me, “When is that boy going to come by and pick it up?”

Keith, my go-to guy for all things railroading emailed he was going to be escaping Kansas City for a few days to come to Cape. FINALLY, a chance to get rid of this crazy canteen.

We made arrangements to meet at the Jackson at the Cape County History Center. It turned out that he and his dad knew some of the people mentioned in the museum’s exhibits.

Journey to the Land of Liver & Onions 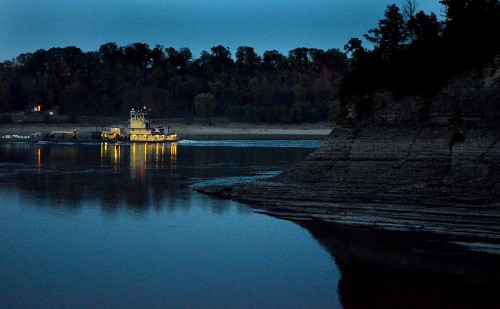 Museum director Carla Jordan shares my love of liver and onions, so she said she’d buy dinner at the Mississippi Mud in Altenburg if I’d drive. I rhapsodized about how good the Mud’s L&O were on September 11. Well, they were even better Thursday night. The meat was so tender you could cut it with a fork; the onions were grilled just right, and my two sides of cheesy mashed potatoes and corn couldn’t be beat.

Carla and I shared our table with Gerard Fiehler and Lynn Degenhardt; two more museum folks filled in the table next to us. Lips were smacked and plates were cleaned. I can see myself making a pilgrimage to Altenburg every Thursday night until I get my fill of Innards and Onions.

I can’t go to East Perry county without dipping down to Tower Rock. Carla and Gerard piled into the van and we got to The Rock at the crack of dusk. Our timing couldn’t have been more perfect. Click on the photo to make it larger.

Here’s why I don’t wade 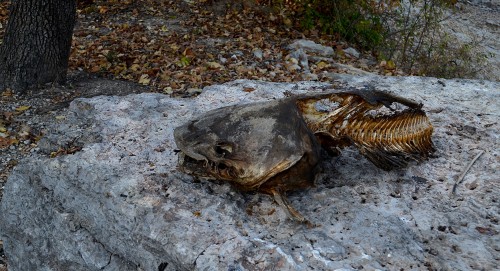 The river’s going to have to fall about another three feet before you’ll be able to walk out to Tower Rock.

I was up there two days earlier hoping the leaves had turned, but they still needed a few more days of cold weather. This catfish was sitting on the rock where Mother used to scoop up some of the best persimmons to ever hang on a tree.

My thought was, “If the fisherman didn’t keep this guy because he was ‘too small,’ I don’t want to stick my feet into any water that would hold his big brother.” 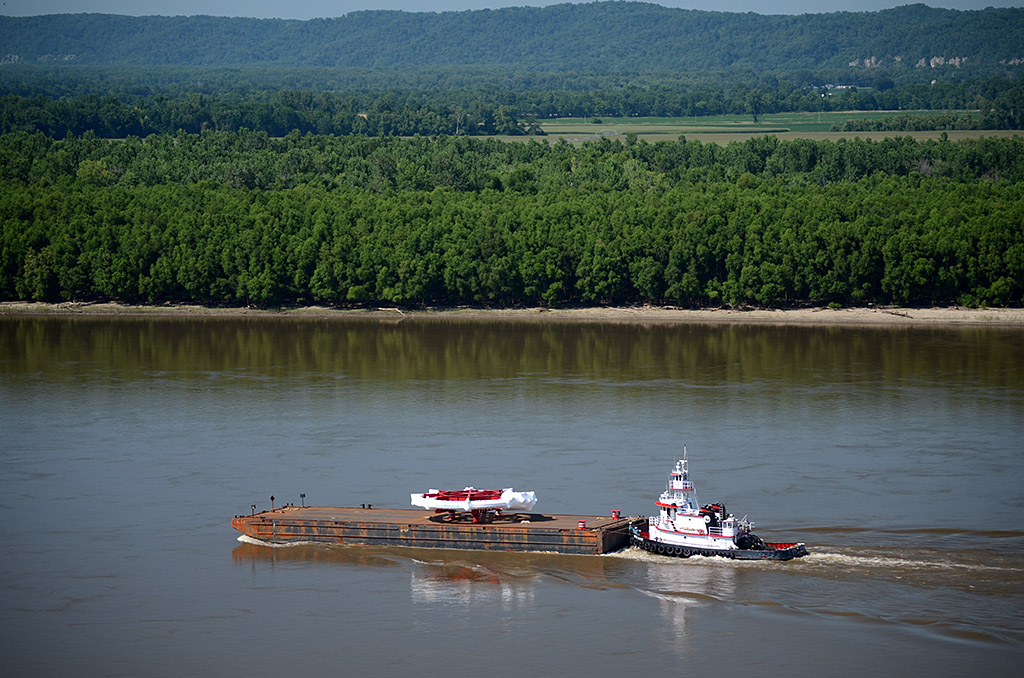 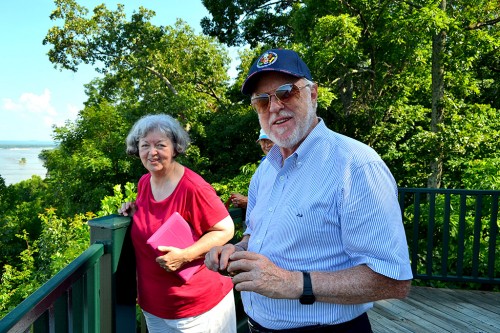 Jim Stone, Central High School science whiz, emailed me all excited about a big magnet that was going to be passing through Cape on the Mississippi River. He sent me a link with a near-live GPS tracking do-hickey so I’d be sure to know when it was coming.

That’s Jim on the right. He’s a Professor of Physics at Boston University and an all-around big-whoop in the world of chasing tiny particles that may or may not exist and if he finds them I don’t know if he’s going to put them in a coffee can or what.

That’s not the way he explains it, but that’s the short version. The woman in red was just a tourist who stopped by the Trail of Tears overlook. Click on any photo to make it larger. 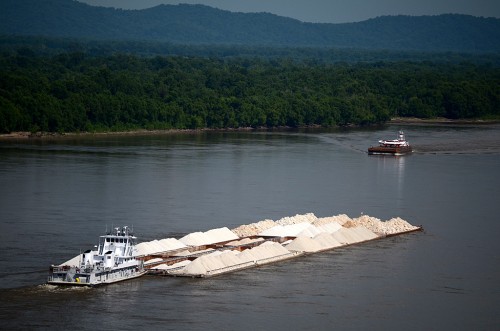 The Paul Revere of the magnet world sent me a frantic text Wednesday morning: “Magnet already past Cairo. Will pass Cape in about 2 hours. I will miss it since I am just now boarding my flight. I’ll check when I land but will most likely catch it at St Louis or slightly south. It seems to be moving rather fast.”

He sent the alert at 6:30; I got it at 8:30, so I figured two hours from Cairo would mean that I would miss it by the time I put my pants on. I pulled up the tracking chart and saw it was just making the curve down by New Madrid. Jim may be a great physicist, but he didn’t learn one basic rule: boats go faster downstream than they go upstream. It was going to be awhile before it got to Cape.

I had some interviews in Perry County, so I passed the ball to Fred Lynch and James Baughn at The Missourian. James managed to snag it as it was passing Cape.

A pretty day on the Mississippi 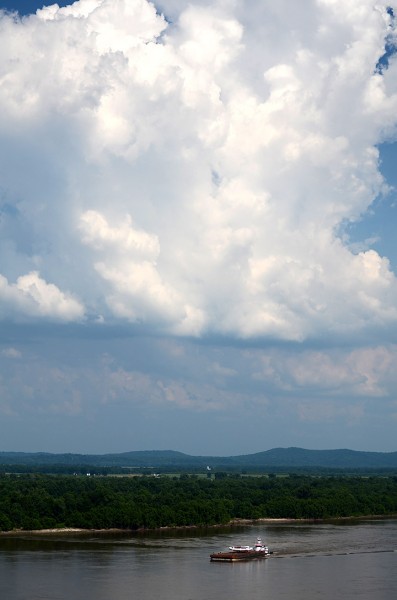 Jim’s plane landed and he caught the magnet at Cape Rock. I wrapped up my interview and blasted off to the overlook at Trail of Tears. The route I took was hilly and curvy and one where I know (I hope) every curve, so I made good time. The brakes sure smelled hot when I pulled in, though.

Jim wasn’t there, but I heard boat radio traffic that sounded like two barges were setting up to make a pass. Sure enough, way down to the south, I could see a towboat pushing a single barge with a white thing on top of it. It might have been unique, but it wasn’t too exciting to look at. 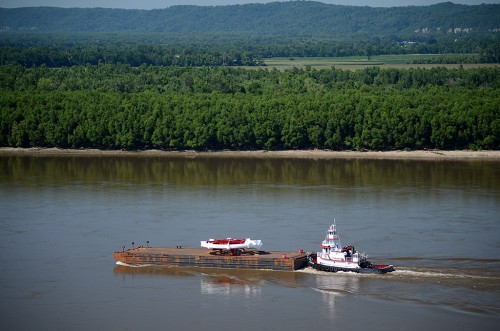 I called Jim to tell him it had arrived, but would probably take a good 20 minutes or more to make it out of sight. His timing was perfect: he made it when it was almost right in front of the lookout. 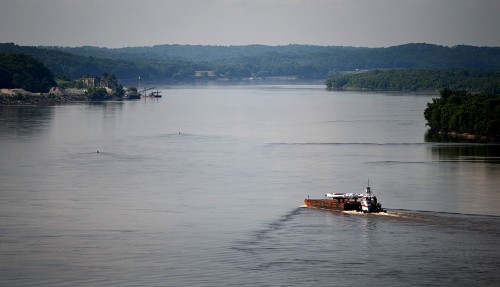 A very nice woman was intrigued by the idea of something going by that was too big and delicate to be lifted by helicopter and couldn’t be hauled by truck from Brookhaven National Laboratory at Long Island, New York, to Fermi National Accelerator Laboratory in the Chicago suburbs, its new home.

Jim went into great detail about how its core was created with a single coil of wire and if that wire was broken or damaged, then the whole thing was kaput. (I’ve been photographing the last generation of German speakers in the pioneer communities of Perry county, so I’m hearing stuff like “kaput” all the time.)

He went on to explain the calibration process and how they fine-tune it by placing a piece of paper under a single strand of wire until the magnet output is exactly even. Once that’s done, they throw a pet throgmorton (or something that sounded like that) into the middle of the magnet and check for deviation. 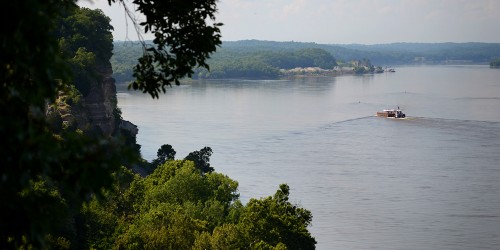 “If they find a deviation, I assume the first thing they check would be if anybody added a refrigerator magnet in the break room,” I volunteered. Scientists take these things seriously, so I could tell he was not amused.

When he thought I wasn’t looking, though, I saw him writing “Check break room for refrigerator magnets” in a small pocket notebook.

If you really want to know what the magnet is used for, check out the Fermilab website. My explanation is easier to understand.

Had time for burgers at Mississippi Mud 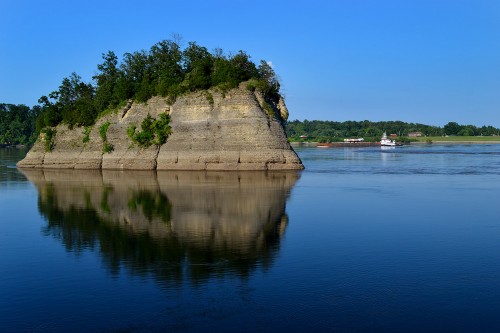 As soon as the target was out of sight, we headed up to Altenburg to the Mississippi Mud Tavern in Altenburg, where I had the second-best hamburger of the whole Florida-Missouri expedition.

I calculated that it was going to take about 1-1/2 hours for it to get 15 or so miles up to Tower Rock. My guess was pretty close. We had scarcely pulled in before we could hear the throb of engines coming up the river. The Miss Kate and her precious cargo managed to make it past The Demon That Devours Travelers, so we went upriver to catch it passing under what was (and may still be) the world’s longest suspension pipeline. 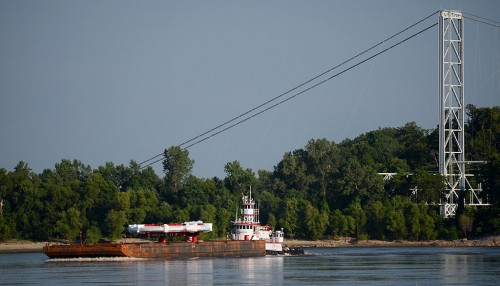 We had a pleasant conversation with some guys enjoying the breeze and some brews. While we were standing there, Jim noticed a sign that had been used for target practice.

“What if somebody took a shot at it while it was in transit? That thing passed through Kentucky and Tennessee where somebody might have been tempted to take a potshot at something that looks like a flying saucer,” he obsessed.