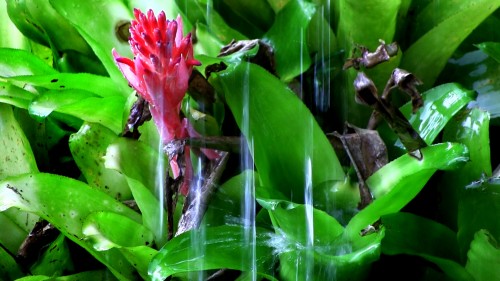 We had our first brush with 2014 tropic weather this afternoon when Tropical Storm Arthur went from Invest 91L to a tropical depression to Tropical Storm Arthur right off the coast from us. To be honest, it wasn’t all that big of a deal: we had a regular boomer move through a couple of days ago that was a lot more impressive for its wind, heavy rain and lightning.

The lawn and flowers got a nice splashing.

Still, it was worth going out on the porch and carport to grab a little video.

Looking back at other storms

A wimpy Isaac and tales of Kate

Hurricane Francis makes a mess in 2004

Between Gustav and Hanna with Ike coming (plus, I got a little behind in my blog)

Tropical storm and hurricane warnings are something you get used to in Florida. It’s not a matter of IF, it’s a matter of WHEN. We’ve been coasting since the 2004-2005 season when four hurricanes passed over us, so I used the prospects of a brush from a Category One storm to check out the generator and take inventory. (Click on any photo to make it larger.) Looks like you folks might get a little rain out of this one. I hope it’s not like Ike that missed us but blew down trees in the Midwest. 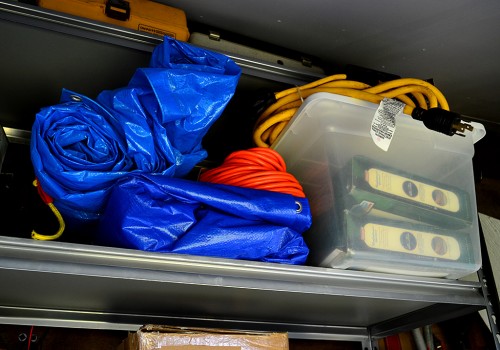 I’ve always been a disaster buff. I chased 13 hurricanes for the paper and wrote the hurricane coverage plans for the newsroom. When I moved into telecommunications, my staff was responsible for figuring out how to keep the phones and networks linking our remote offices up as long as possible. I took a lot of ribbing for my multiple layers of redundancy, but it paid off. Generally we never had to touch Plans C, D and E.

We have a 10×30 shed in our back yard. A 10×10 section is where I keep old prints, film and clips, plus my bikes. A 6×10 section has a workbench and tools; the back 4×10 room contains the pump for our sprinkler system, garden tools and the hurricane supplies.

This shelf has tarps, extension cords and a plastic container with Coleman air mattresses from the days when I had to camp out at the office for the duration of the storm. We’ve been lucky that we haven’t had to use the blue tarps except to make a covering for the generator. I did loan a couple of 30×30 tarps to a coworker who had a tree go through her roof. 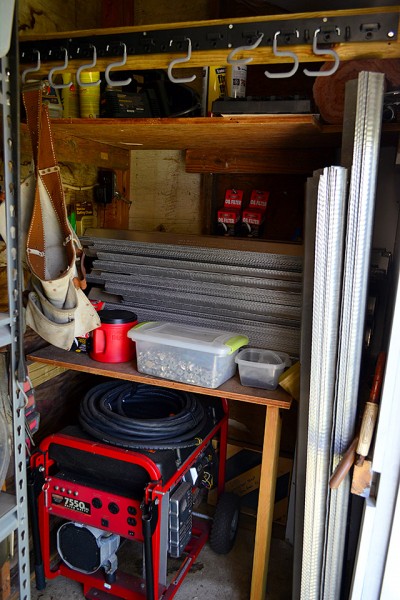 I finally got the supplies organized where they are easy to find and deploy. The Generac 7550 EXL generator is stored under a shelf and next to the aluminum storm panels that cover the doors and windows. On the shelf above the storm panels are miscellaneous items like cans of Fix-A-Flat. The streets are full of nails and debris after the storm. We found the two most valuable things to carry were Rain-X for driving DURING the storm and Fix-A-Flat for driving AFTER the storm. You’re on your own and there aren’t many places open to patch tires.

I have extra oil and several oil filters for the generator, plus the wrench needed to change them. (It’s smaller than your car filter and a bear to get to.) There are nylon tie-downs to strap our aluminum awnings down to keep them from acting like big kites. I have two electric chainsaws with spare chains and chain oil. (I prefer electric to gas because they don’t require as much care. They aren’t as powerful as gas, but I have a whole lot better luck with them.) 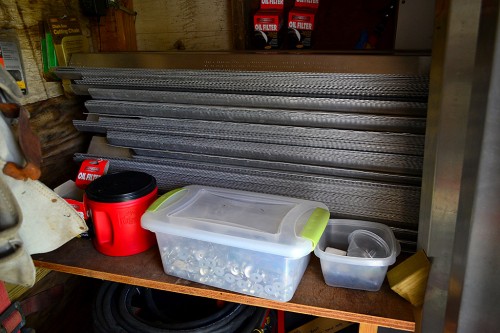 I used sheets of 3/4-inch plywood to cover the windows for years, but it was heavy and took up lots of room. In the early 2000s, I switched to aluminum panels. I wish I could have afforded accordion shutters or hurricane-rated windows, but what I bought was a big improvement over plywood. The coffee can and plastic box contain the hardware to put up the shutters. When I finish with it, I spray it down good with silicone spray to make it spin on easier the next time.

If one of the kids is available to help, we can cover the whole house in about two hours.

I love my generator 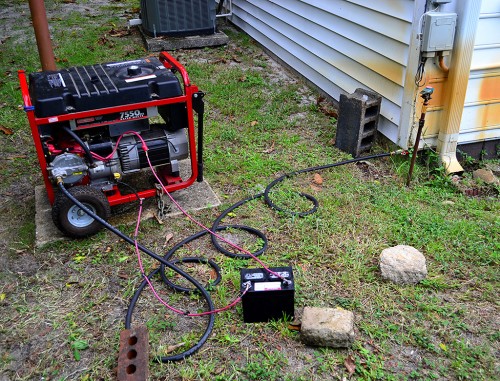 After Hurricane Hugo, I bought a 300-watt generator and didn’t use it for 10 years. Even at that, I considered it a bargain. After the first time I used it, I upgraded to a 7500-watt unit and bought an adapter that would let me run it on gasoline, natural gas or propane. (Kid Matt inherited the old one.) It was great not to have to run around buying and storing gasoline for storms that missed us. Running on natural gas meant that I didn’t have to run out to fill the tank every few hours, either. The best part was that I didn’t have to worry about the gas going stale and turning to varnish.

I tried to make a practice of dragging it out annually to crank it up for 10 or 15 minutes and change the oil and filter. I got sloppy and hadn’t done any maintenance on it for at least two years. The battery had been hooked up to a trickle charger, but it was going on eight years old and didn’t have enough oomph to start the motor. I yanked on the starter cord a couple of times and was rewarded with a satisfying throaty roar from the engine. A roar that lasted about eight seconds.

Yank, Yank, Yank, ROARRRRRR, eight seconds, silence. I was too old to do the yank, yank, yank part, and eight seconds wasn’t long enough for me to try to make any adjustments on the running engine. I went in search of a new battery. Eighty-two bucks?!?! It fit in a bracket that was on odd size, so you couldn’t just walk into your basic big box store and pick up a generic one.

I opted for a lawnmower batter for less than half that amount and hooked it up with a (too-long) length of  No. 6 gauge wire. Once I got the thing running, I figured I’d go back and make it pretty. It turned out to be more battery than I needed. Kid Adam has the same generator and the same dead battery problem. After seeing my experience, he opted for a less expensive, less powerful battery and found that the existing cables were long enough that he didn’t need the extension.

How to keep your generator 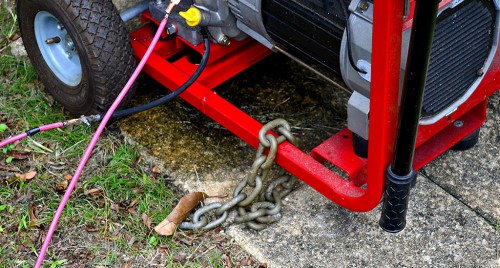 Generator theft is a big problem. I heard a story which is just strange enough to be true. If it’s not, it should be.

A guy put his generator right outside his bedroom window so he would know if anyone was fooling with it. It had enough power (like mine) to run a small window AC unit so he could sleep comfortably. About three in the morning he felt the room getting hot. The AC unit had shut off and the light at the side of the bed didn’t turn on. He couldn’t figure out what was wrong because he could hear his generator purring away outside the window. He grabbed a flashlight and went out to see if the cord had vibrated loose.

What he found was a lawnmower running where his generator used to be. Like I said, the story deserves to be true.

The frame of my generator is bolted down with the biggest chain I could find. If I get really paranoid, I’ll take the wheels and handles off it. It has a shipping weight of 270 pounds, so they’d have to REALLY want it to carry it off. 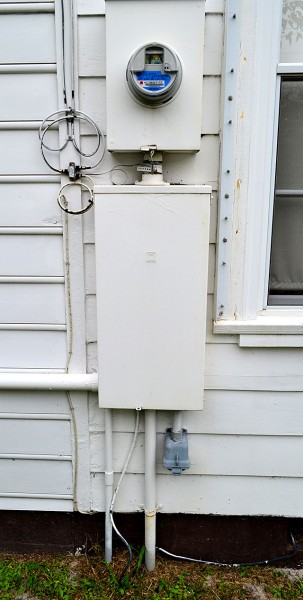 The gray box at the bottom of my breaker box is where I hook up the generator. The first step is to throw the main breaker to take us off the grid. I don’t want to be sending power down the line where it could electrocute some utility worker. If I balance the load properly, I can keep the refrigerator, ceiling fans and most of the wall receptacles going. A small window AC unit will cool one bedroom.

We use natural gas for the generator, stove, hot water heater and dryer, so we’re better off than most folks. During one of the recent storms, a major water main broke, cutting off water to a lot of the city. The generator kept our sprinkler pump going, so we ran a hose into the bathroom to flush the toilet. We had enough bottled water on hand for drinking and cooking. 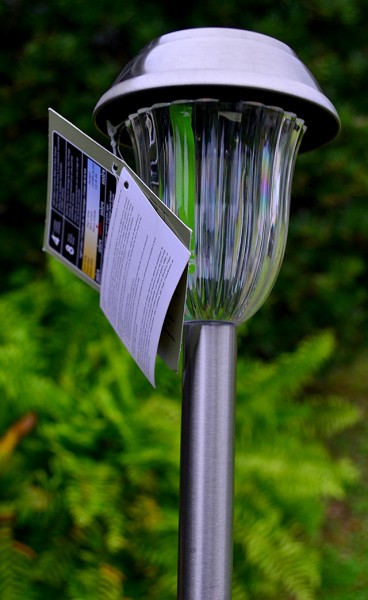 If you’re looking for a great source of light, pick up a few Solar Garden Lights. They’re cheap, put out a lot of light and recharge in sunlight. They take AA batteries, so you could charge several and have them on hand or use regular AA alkalines if there hasn’t been enough sunlight to give them a full charge. 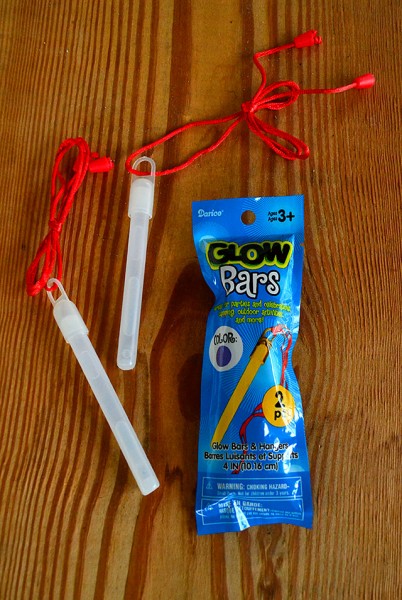 Hit the party aisle for a handy light that doesn’t put out heat, stores practically forever, lasts eight to 12 hours and is inexpensive. Cyalume Chemical Light Sticks will give enough illumination to move around a room when they’re first activated. Even when they start to fade, you throw them on the floor to help your find your way down hallways.

We bought a bunch of them at the office to hang over door knobs to mark “safe rooms” that would have been the shelter places of last resort. We never got a storm that strong, fortunately.

Cops found a unique use for them in the aftermath of Hurricane Andrew. They didn’t have the manpower to process looters, so they would break open the plastic tube and splash the harmless glowing chemicals on the bad guys, saying “This is your one warning. If we see you glowing on the street again, we shoot.”