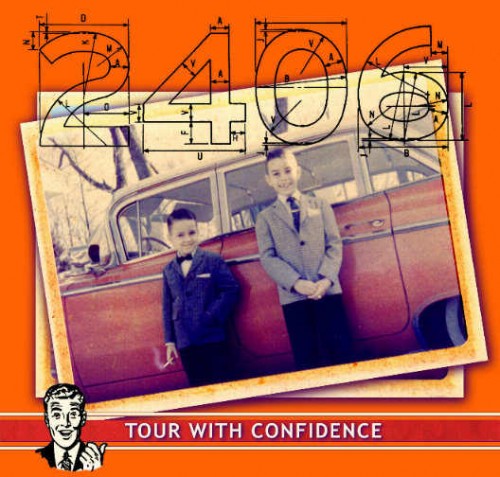 Bill East sent me a clipping from The Southeast Missourian’s Out of the Past column Saturday, Feb. 20, 2010.

A tour south, having traveled some 5,000 miles since leaving on Jan. 27, was completed by Mr. and Mrs. L.V. Steinhoff and sons, Kenny, David and Mark, of Cape Girardeau, when they returned here late yesterday; their itinerary included many cities, including Miami, Silver Springs, Cypress Gardens, St. Augustine and St. Petersburg, Fla., and New Orleans, La.

That was a trip my brothers and I will never forget. I’m sure you’ll hear a lot about it one day.

Chuck Dockins was a hero

What I didn’t see until later was the item under that one:

Charles Dockins, 12, rescues two small girls from a burning car in Cape Girardeau in the evening; Dockins, a Boy Scout, notices the fire in a car parked on the National Food Store lot and goes to the girls’ rescue; they are unharmed.

Are we talking about THIS Chuck Dockins? 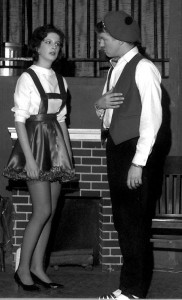 The one who was playing in the 1965 Central High School Red Dagger play with Sally Wright and Sherry McBride?

Here’s the Google Archive story from the Feb. 19, 1960, Southeast Missourian.

A Cape Girardeau boy, 12 years old, who happened to be nearby at the time, rescued two small girls from a burning car in Cape Girardau early Saturday night. The girls were not hurt, except that they inhaled some smoke.

The lad, a Boy Scout, is Charles Dockins, a son of Mr. and Mrs. P.L. Dockins, 1807 Bloomfield St. The fire was in the parking lot of the National Food store on Sprigg at William, and it was about 7:15 Saturday night. The car which suddenly caught fire was on the west middle section of the parking area.

The car that caught fire was that of Mrs. Christine Petty of Cape Girardeau. 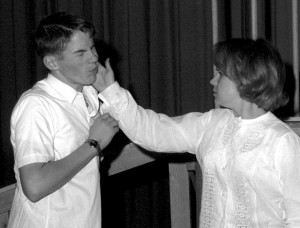 The Dockins car was near the Petty machine in which the two girls were seated. Charles said he noted a flash suddenly appear in the back half of the other sedan. He left the baby in the Dockins car after closing the door as he got out, and ran over to the other car.

One girl, about 5, was seated on the front seat, and the other was there too, by that time, and Charles said she evidently had just climbed from the back seat.

The boy said he first opened the door and pulled out the smaller of the girls, with the fire getting pretty hot by that time. He then took the arm of the other girl, about 7, and got her out of the car. He led them to near the door of the store and asked people to call firemen. He then checked back with the baby. The rescued girls were crying a little, but the Dockins baby seemed merely to be entertained by the whole proceedings.

Follow the Google Archive link to read the whole story and to see a photo of 12-year-old Chuck.