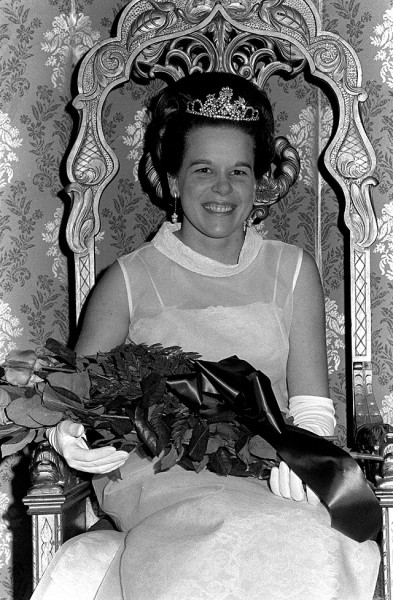 I see in The Southeast Missourian that it’s prom time in Cape County. I found a negative sleeve that  said “Senior Prom 5/20/67.” No names, of course.

These kids were two years behind me, so they were, of course, beneath notice to someone of the Class of 1965. To make matters worse, there are some days missing from The Missourian’s microfilm film on Google.

A Youth Page story by Margaret Randol on Feb. 4, 1967, said that “…senior boys selected five girls as candidates for Senior Queen. One girl will be chosen by the entire class at a later date.

The Queen will be crowned at the Senior Prom on May 20. 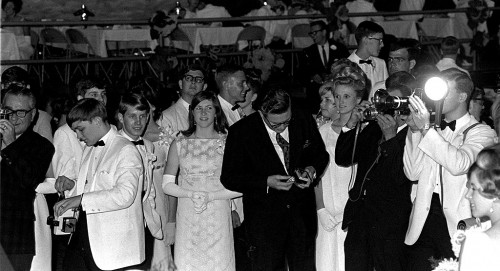 I see a Polaroid camera, a Kodak Brownie and what looks like an Argus 35mm camera in the crowd. The guy on the right is shooting with movie camera, and he has a still camera with a Honeywell Strobonar “potato masher” electronic flash hanging over his shoulder. (Hey, I may not remember the names of people, but I know my cameras.)

“However, in special cases, boys will be excused if a request is filed with the [prom] committee.” The problem was that many girls said they’d be unable to attend without escorts. The senior class had almost twice as many girls as boys, so it was noted that “girls will be forced to come with other girls.”

A school in Mississippi recently canceled its prom because a girl wanted to wear a tux and bring a girl as her date. Cape solved that problem back in the 20s.

The Tiger assured its readers that “All will be furnished an enjoyable evening, however, and dances will be secured for those without dates.

“A specialty number will be the feature of the evening. Along with the fine 7-piece orchestra which has been secured, other means of enjoyment are planned. There will be confetti, serpentine, paper hats, grand marches and all the usual merry-making conveniences.”

One of the perks of the job 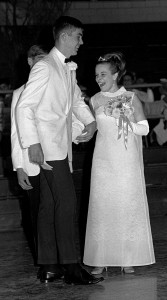 Here’s a little secret: photographers were usually tipped off who who was going to be crowned queen. That was so we’d be in the right position when the winner was announced. We’d have to wander around to keep from telegraphing that we knew, but I never heard of anybody giving the secret away.

It was kind of empowering at that age to know that the whole proceeding would stop for a few moments while you got the shot.

That brings to mind a story about a World War II photographer for Stars and Stripes. I can’t swear it’s true, but it should be.

At the end of the war, half the soldiers in Europe and a whole herd of generals and heads of state were gathered for a ceremonial photo.

The photographer looked at the assemblage and told the highest ranking general, “Everybody take one step back.”

With much shouting and jockeying around, everyone took one step back. The photographer then took one step forward and snapped his photo.

The Stars and Stripes reporter said to the photographer later, “You must have an incredible sense of composition. What did you see that made you decide that everyone should step back and then you step forward?”

“Nothing,” he replied. “I just figured I’d never have a chance to do anything like that again in my life.”