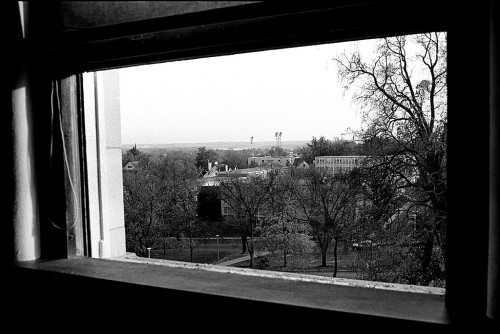 This photo was taken from a classroom in Academic Hall, looking toward downtown. The objects sticking up above the skyline are the phone company’s microwave towers. In the Old Days before optic cables, a lot of the country’s long distance traffic was beamed from point to point using these towers. Almost all of them have been decommissioned now.

I don’t know if this was the classroom where I took speech under Fred Goodwin, who also produced winning debate teams.

The assignment was to give a speech where you demonstrate something. I walked into class with my camera, proceeded to shoot pictures of everyone, then developed the roll of film standing in front of the classroom.

Mr. Goodwin said it was a good effort, but didn’t come close to a demonstration he had in his early teaching days. The student was a former paratrooper who gave a speech on what it was like to jump out of a plane. In conclusion, he walked to the window, threw open the sash, perched briefly on the window sill, did a tuck and roll and disappeared from sight.

It was not a first-floor window

Mr. Goodwin said he could see his career perishing along with his student. After a moment of stunned silence, the whole class, including the instructor, made a dash to the window, where they saw the student beaming up at them.

He didn’t say what grade the student earned.

7 Replies to “Microwave Towers and Paratroopers”