It’s amazing how readers can come up with the strangest permutations of story ideas. Yesterday I wrote about how a big tire went bouncing down Broadway in 1965, wreaking havoc (OK, breaking a window and denting a car).

Among the photos I posted was Pete Koch’s Sinclair Station. Read the comments on yesterday’s posting to see what it’s being used for today. (You might have to press CTRL-F5 to bring up the latest ones when you get there.) 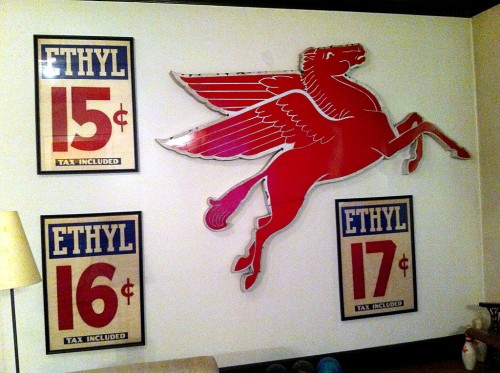 A comment I made that I thought gas would have been about 36 cents a gallon in that era prompted Spokesrider to say that sounded high from his perspective in Michigan. I still think 36 cents was right, except for the occasional price war kicked off by Thoni’s.

Bro Mark sent  me this photo of his living room wall, along with this note: “Saw your piece this morning. I bought these paper gas price signs in Cape and framed them a long time ago. Ah, the good old days of cheap gas and polio and cold war threats…I’ll take the high price of gas today, thank you.”

All the news about making snow ice cream and Mark’s comments about Cold War threats must have been in the back of my mind when I picked up The Week magazine and saw an obituary for Dr. Louise Reiss. If you are of an age to remember Duck and Cover, your parents may have sent your baby teeth off to Dr. Reiss.

The St. Louis doctor had hit on the idea of testing children’s baby teeth for strontium 90, a radioactive byproduct of atomic bombs that were being detonated in the atmosphere. Her analysis of 320,000 teeth showed that children born in St. Louis in 1963 had 50 times as much strontium 90 in their teeth as children born in 1950.

Her findings were largely responsible for the U.S., Britain and the Soviet Union agreeing to a partial ban on testing atomic weapons in the atmosphere.

That’s why you’re safer eating snow ice cream today than when we were kids. (You still want to avoid yellow snow.)