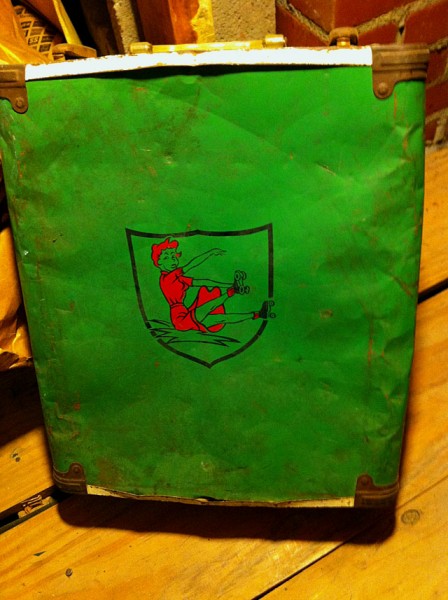 A couple of my former coworkers put together a book called The First Book of Last Times. (If you are intrigued enough to buy it, click on the link and I’ll get 6%, without it costing you an extra cent.)

The Amazon description says, “First times get the glory and the high fives. When you first rode your bicycle without training wheels or got that first haircut without the booster board, the whole world applauded. But what about those last times, as forgotten as a petrified Fruit Loop under the sofa?

“One day you’re a kid playing hide and go seek and jacks on the front stoop and next thing you know you’ve moved on. No more “Ollie ollie oxen-free” and “Onesies and twosies. That changes now. In fact, we here at the First Book of Last Times remember them and celebrate them. And then we kick off our shoes and slide in our socks.”

That’s the skate case I mentioned in my piece about my grandson’s 7th birthday and my memories of skating at Hanover and Maryann roller rinks in Cape.

Brother Mark crawled up in Mother’s attic to look for it when he went to Cape for Labor Day. Thanks to him for the photos.

The funny thing is, I would have SWORN the picture of the girl was white. I guess I must have been thinking of the trim at the top and not the red girl skater. That poor case sure has its share of dents and dings.

See, the wheels ARE wood 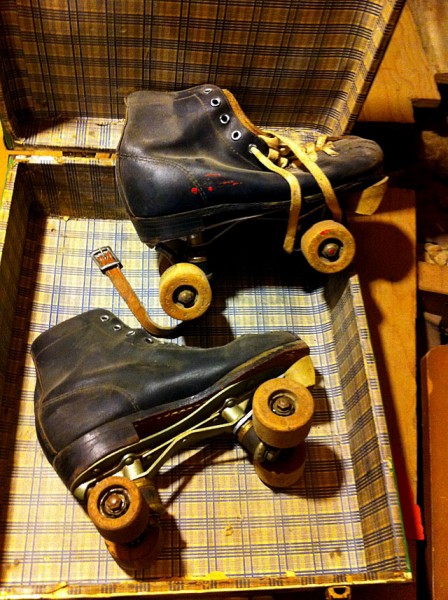 I hope Son Matt will believe me now that the skate wheels WERE made out of wood. Looks like someone took the shoelace out of the left skate. I thought I had a pompom on the toes, too, but I could be wrong there. The rubber toe stops are worn down quite a bit. Once you got proficient, you usually stopped or slowed down by turning your skate sideways to scrub off the speed. That kept you from wearing out the toe stops. You’d also use the stops for quick starts by tilting the skate down and pushing off the rubber for the first couple of strokes, sort of like a runner used a starting block.

I don’t know what the leather strap was for, nor where the red paint on the side of the wheel and the side of the shoe came from. The red paint was probably the work of my destructive younger brothers, who destroyed my pristine comic book collection as soon as I went off to college.

The wheels look like they’re covered in dust. Do I recall correctly that the Hanover rink would put a resin powder or something on the floor to give us better traction? Or was that just some kind of absorbent to blot up the spilled blood?

What does this have to do with the Last Times book? 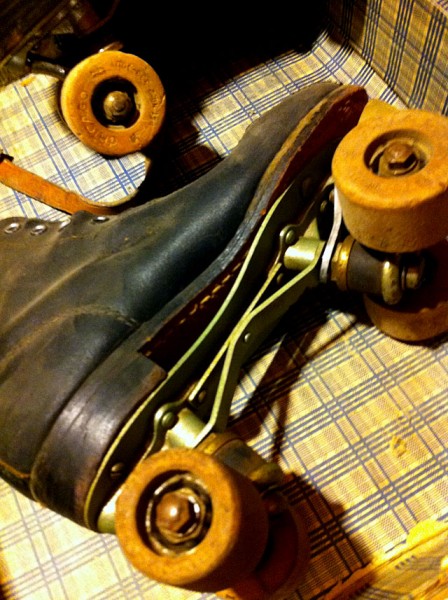 It occurred to me when I looked as these photos that I don’t remember the last time I put those skates on. I wonder if I KNEW it was the Last Time? Wife Lila remembers going skating with me at Hanover. I wonder if the Last Time was with her?

On the way to dinner with Son Adam, we were talking about this topic, which caused her to flash on a time when he was sleeping on the living room floor when he was four or five. “When I picked him up, I thought, is this going to be the last time I’m going to be able to do this?”

I thought the last time I walked out of the newspaper after close to 35 years would be traumatic, but it turned out that the paper left me long before I left it. I thought that would be a Major Last Time, but it was anticlimactic.

What are your Last Times?

If you need hints, click on the link below and buy the book. Retired newspaper guys need all the help they can get.

Let’s hear it from you.