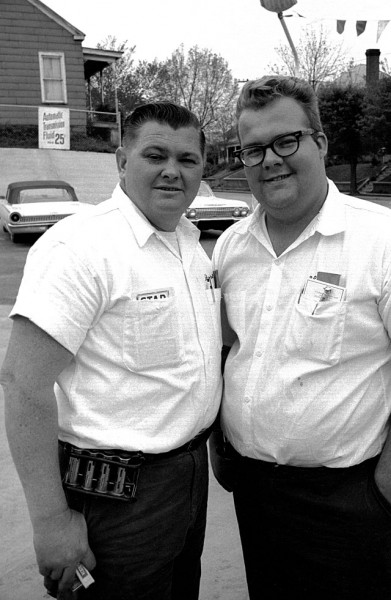 These guys looked vaguely familiar, but when I saw the coin changer and the Star book peeking out of the shirt pocket, I KNEW where this was taken: The Star Service Station at 600 Broadway.

I bought a lot of gas from them over the years. They were in the perfect location: across the street from Nowell’s Camera Shop, on my way to The Missourian, and close to the Rialto, where Lila worked. Oh, yeah, also nearby to Tony’s Pizza Palace. What more did a young man need in the 60s? 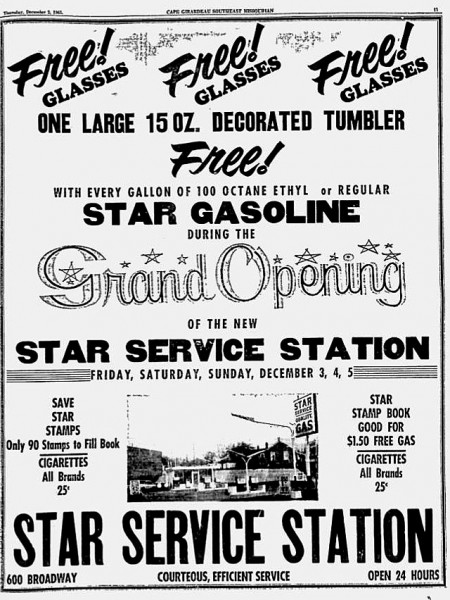 I filled a bunch of those Star Stamp books over the years. Ninety stamps would earn you $1.50 worth of free gas. I’ve never been a smoker, but my eyes open when I see smokes for a quarter a pack.

This was a full-service station, too. None of that pump-it-yourself stuff in those days. I don’t remember if they’d vacuum your car like Brune & Eaker’s Phillips 66 that I wrote about earlier.

When I searched for stories about 600 Broadway, I found that it has been lots of things over the years. Here’s a sample:

Stevies Steakburger was in the building when I was in Cape in October 2009. The white building on the right is Annie Laurie’s Antiques, formerly Brinkopf-Howell Funeral Home.