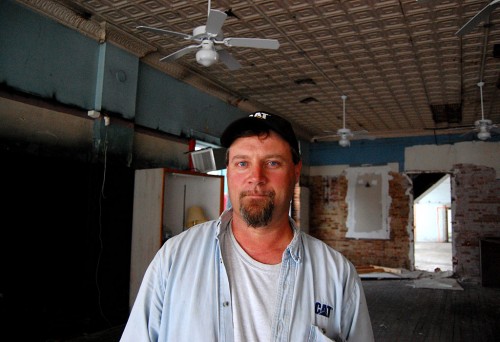 David Renshaw and I didn’t exactly get off on the right foot.

I told Mother I wanted to cruise by 501 Broadway to get a shot of an old building that was due to be torn down. I had photos of it, but I wanted one with the fence around it that would say, “Days are numbered.” I left her in the car with the heater running. (As always, click on any image to make it larger.) 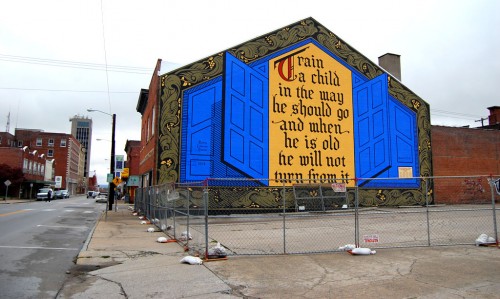 I shot the west side, where the big blue mural is; wandered around to the front; decided I might as well walk down the east side, not because the photos would be all that interesting, but because I wanted some record shots. My eye was drawn to what looked like an enclosed wooden porch on the second floor. In the middle window of the porch was a gold-colored object that looked like it might be a trophy. Curious.

What’s in the window? 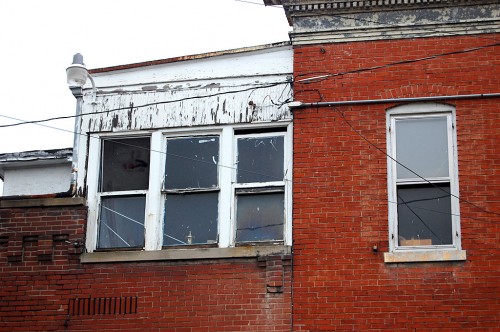 While I was looking at it, I noticed a gap in the fence and a black vehicle pulling into the building through the fence. I decided to “follow that car” to see if I could get some interior shots. I didn’t spot anyone right away, but, walking further in, I ran into a young woman. I handed her my card and started to explain what I was doing when a man walked up asking what I wanted. 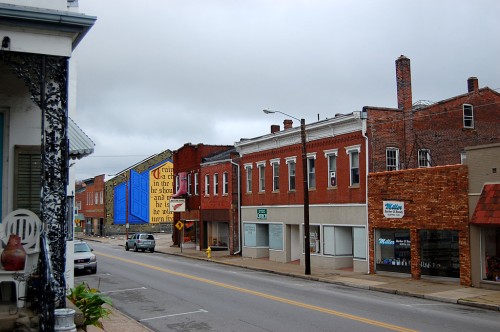 I launched into my standard 30-second elevator speech and got to the part where I said, “I used to work for The Missourian.” That was not a good thing to say because David Renshaw was not happy with part of a Missourian story that morning.

Not happy with Missourian story 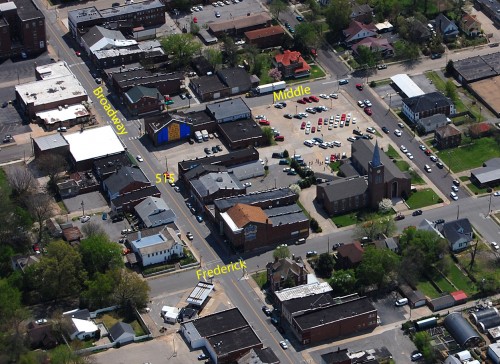 What had his tail twisted was a line in the Nov. 15, 2010, story that said, “[Tim Morgan, director of the city’s Inspection Services Department] and church leaders did not know the exact day the building would come down. But the church has hired Sabre Excavating of Thebes, Ill., to do the work. David Renshaw, of Sabre, did not return phone calls Monday.”

“How could I return a phone call that I didn’t know I’d gotten,” he said, and walked away. Brandy Williams, the young woman clarified. The reporter had called his home number and left a message there. He didn’t get it until much later. 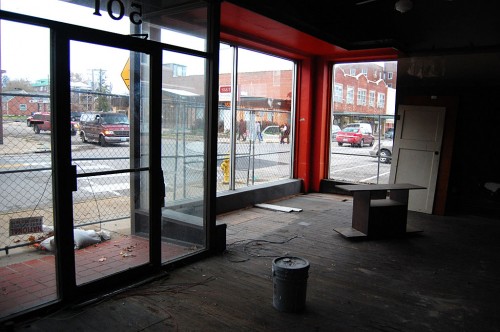 Let me digress here to talk a little about newspaper-speak. In the old days, reporters wrote what information they had and put it into the paper. At some point, people started complaining that, “You didn’t let me tell MY side of the story.” To counter that argument, you started to see some of the following phrases in the paper. How they were interpreted depended a lot on the paper’s policies and local customs.

“I’m really not a rude guy” 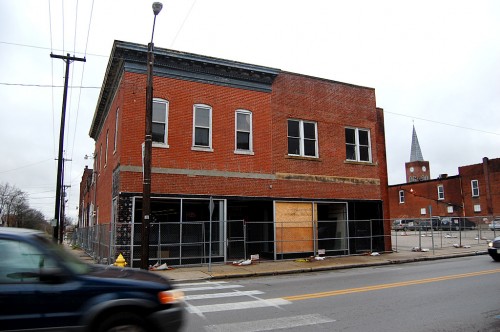 Renshaw came back a couple of minutes later. “I’m not really a rude guy. This just had me a little upset.”

I told him that I was not responsible for anything that happened at The Missourian after 1967. After that, we got along great.

I was discussing interviewing techniques with someone the other day. I said that I approach an interview the same way that I approach fly fishing: I think there’s a big bass hiding under that sunken log and I’ll make a test cast to test my theory. If I’m lucky, I’ve landed a lunker. More than likely, my question won’t get a nibble, so I’ll cast another one. If I’ve tried two or three casts without a nibble, I’ll switch bait and fling it again. 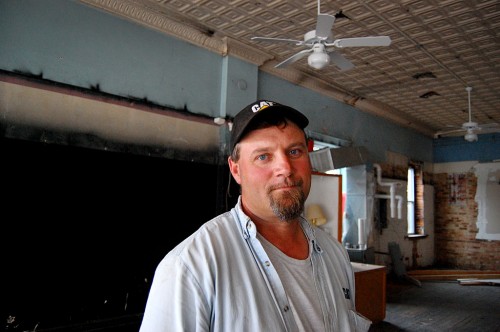 Renshaw has these piercing blue eyes and a bemused expression that deliver the message, “That was a really dumb question” without him having to say a word. He’s the big bass under the log who can’t be fooled with artificial lures.

Like he said, he’s not a rude guy, but I get the feeling he doesn’t suffer fools kindly.

One the other hand, I was impressed with how introspective and how insightful he was. He has a real appreciation for the buildings he’s destroying. 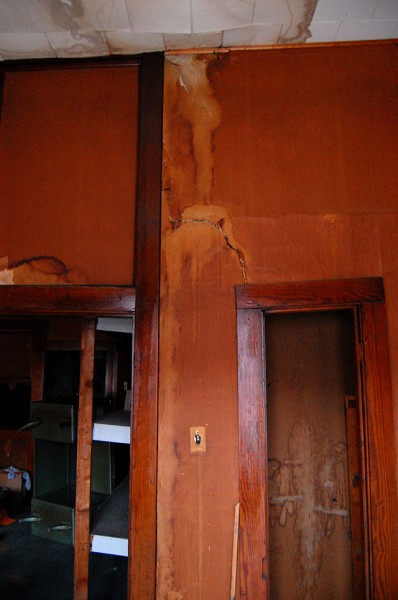 Looking at the tin ceiling on the first floor, with pieces of it falling down and with water dripping from it, I asked if there was any salvage value to it.

“It would mean something to someone,” he said, picking up a rusted and rotten piece from the floor. “But, you can’t save it. It’s too far gone. What are you going to do with it?

“I worked for a demolition contractor in St. Louis for eight years, then I came home. That’s my dad in there knocking stuff down. I just wanted to come home.”

Are the bricks worth anything? 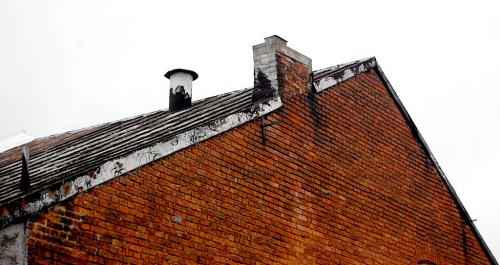 “We did it on one project and we didn’t make anything – maybe $25 a pallet. I don’t have a place to store it.”

“I cut every section of that bridge” 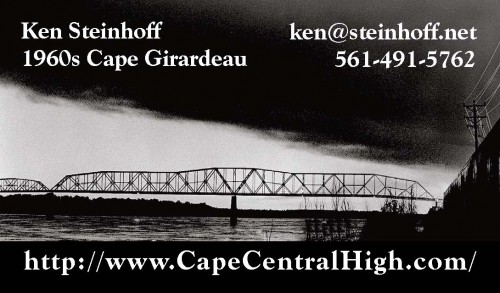 He looked at my business card that has a photo of the old Mississippi River Bridge on it. “I cut every section of that bridge with a huge pair of metal shears. I did that. I was handing out handfuls of rivets to people for souvenirs. I still have some pieces of the debris.

“And, when I was cutting that bridge up, when I got to that piece of the bridge, the stickers were still there. I cut it out and kept it. My son’s 21 now.”

Mortar has turned to powder 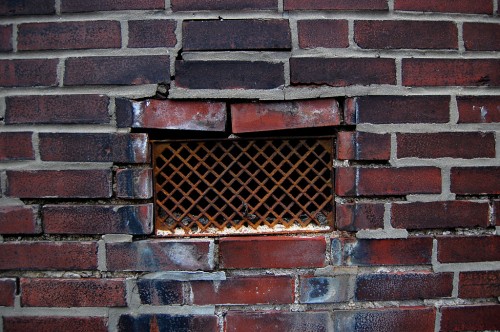 “I think the best thing you can do to this building is to tear it down. There’s nothing here.”

He pointed out obvious cracks in the walls. There are metal bracing bolts coming through the brick wall the mural is painted on, but there are no plates screwed to them. There are places where the mortar has been patched, but most of the mortar is so powdery that you can dig it out with your fingernail with no effort. 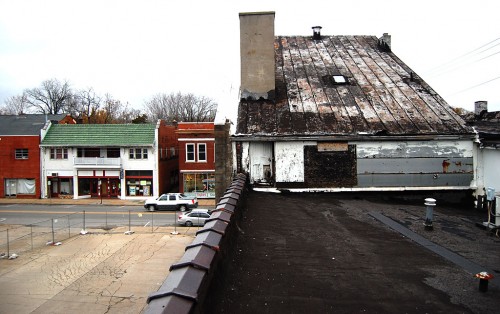 When we walked across the roof, I commented that it didn’t look too bad. He said the leaks aren’t obvious. “You saw the water pouring down through the ceiling. The roof is leaking.”

What I thought was a trophy 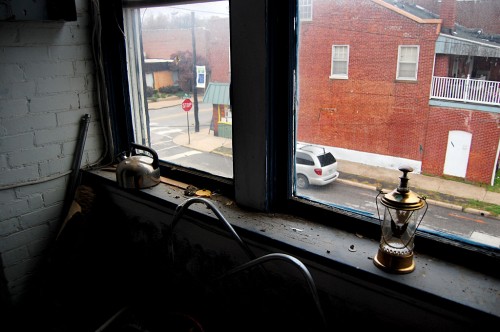 When I asked if it was safe to go up on the second floor, he said he’d be happy to take me up, “but there’s nothing up there but junk”. He thought I might like to go on the roof, though, to shoot the surrounding neighborhood. He said there’s a third floor to the building, but the access to it is boarded up. He didn’t know what, if anything, was up there. 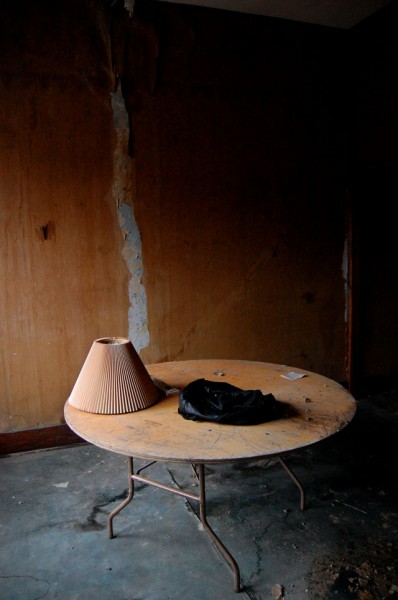 When we got to the second floor, he was right. Whoever had lived in the two apartments there had left behind plenty of debris, but most of it wasn’t very interesting: just some old books, a couple of Samsonite suitcases – “We had a Vietnam vet up here the other day; he remembered carrying suitcases that looked like that” – a pair of crutches and some ratty furniture.

“This is going to be gone forever” 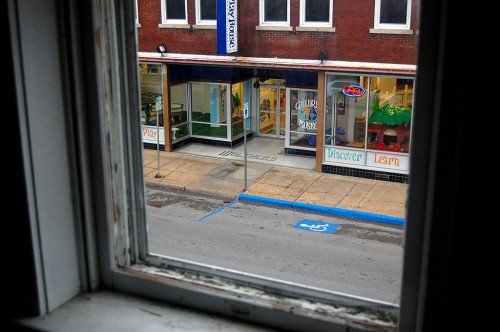 Like I wrote yesterday, just I started to walk out of the room, I turned and said, “I guess I should get a picture of the building across the street. It may be the last picture ever taken with this viewpoint.”

That’s when Renshaw said something that struck me enough that it’s worth repeating: “I learned one thing in demolition – and I look at it from a lot of different ways. This is it. You just said it. This is going to be gone forever. Gone. No more. Right now you just experienced the last thing forever.

“There was a four-year-old little boy up here this morning – his dad is in this kind of work – and he was standing here leaning on this windowsill wanting to go back over there [to the Playhouse]. When he’s 20 years old, he won’t even remember this building.” 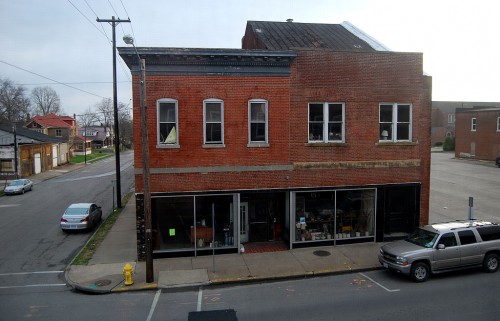 He thinks the building will start coming down around the first of December. “It should go fast, then the trucks will start rolling in here. That’s when people will really start taking note. They really don’t know something’s going on until that.”

Cape firefighters took advantage of the soon-to-be demolished building to practice some of their skills. Missourian photographer Fred Lynch captured a gallery of photos of their training.

“A Time to Build Up; A Time to Tear Down” 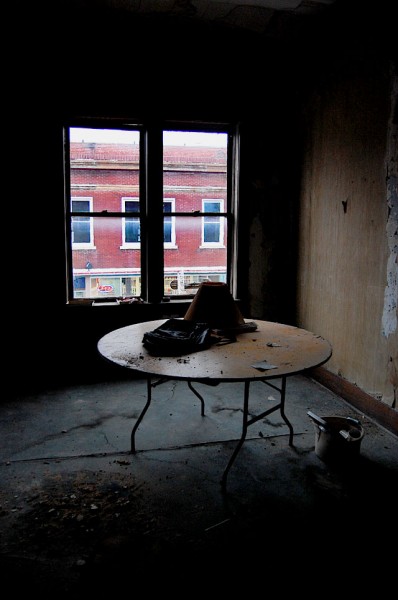 Reader Lyndel Revelle commented yesterday, “It is sad to see them gone forever but then it reminds me of the Byrds song, Turn, Turn ,Turn, (taken from the book of Ecclesiastes) where you find these words, ‘To everything there is a season a time for every purpose under heaven: a time to build up and a time to tear down.’”

Here’s a gallery of photos I’ve taken of 501-503 Broadway and its neighbors over the past few years. Click on any image to make it larger, then click on the left or right side to move through the gallery.