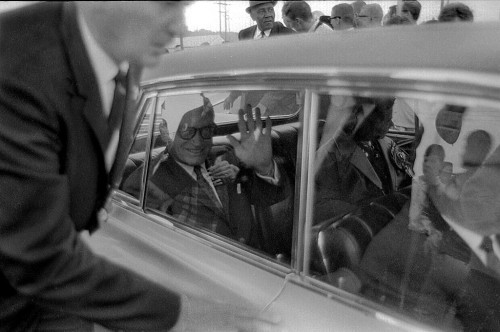 I’m not sure whether to count Barry Goldwater as the first presidential candidate I covered or the second. Barry was in Cairo on Oct. 2, 1964, but I had covered Ronald Reagan stumping FOR Goldwater in Sikeston earlier for The Jackson Pioneer. To be honest, I think I was more impressed by Reagan than Goldwater.

I was prepared when I went to see Reagan. I had a 4×5 Speed Graphic camera, a 35mm camera and a Polaroid camera. I’m sure I had a dozen backup pencils and, maybe, even a portable reel-to-reel tape recorder.

Find the Central students in the crowd 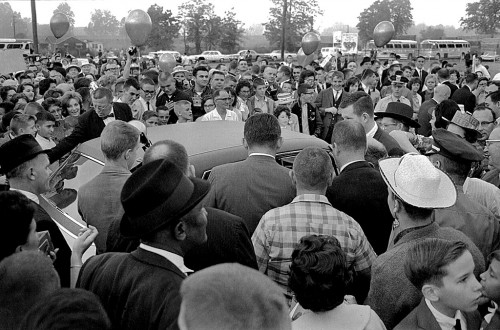 [Note: click on the photos to make them larger. There are a lot of interesting faces in the crowd. Once you get into the gallery, you can click on the left or right side of the photo to move backwards and forwards to the other images.]

I haven’t run across my film and clips from the Sikeston Reagan speech, but I’ll never forget writing the story. I’ve probably recounted it before, but, that’s what happens when you get old.

I was sitting at the typewriter churning out pages and pages of copy. Since we were a Republican newspaper, I was given a lot of latitude.

One more word about Reagan…. 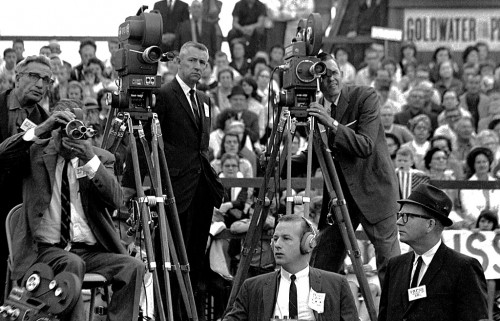 Just then, the double doors separating the newsroom from the composing room slammed open and a burly, ink-stained wretch came charging at me with my copy wadded up in fists that were short a finger or two. “Kid, you type one more F-‘ing word and I’ll break your fingers.”

Mother didn’t raise any fools. I quickly typed – 30 – which is newspaperspeak for The End, and handed him my last sheet. He snatched it up and disappeared as quickly as he had appeared. 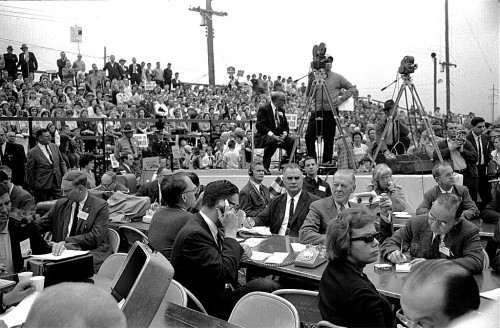 Maybe all these newsmen and women started out at small papers like I did. That would explain the carefully cultivated squint and universal scowls on the faces. Or, it might just be that they had heard Barry’s standard speech a hundred times before and they were wondering where they were going to end up for lunch. 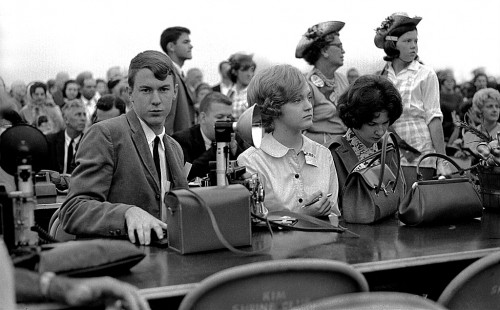 Jim Stone, Shari Stiver and Sally Wright covered the rally for the Central High School Tiger. Jim had the school’s 4×5 Crown Graphic camera and Shari and Sally shared a byline on the Oct. 23 front-page story.

Despite their expressions, the story said “The impressions of the two editors who covered this story for The Tiger was mainly one of pure excitement. ‘We had our own press passes and sat in the very front of the press box, and they even fed us,’ said Sally Wright, 12B.

The Tiger story and photos 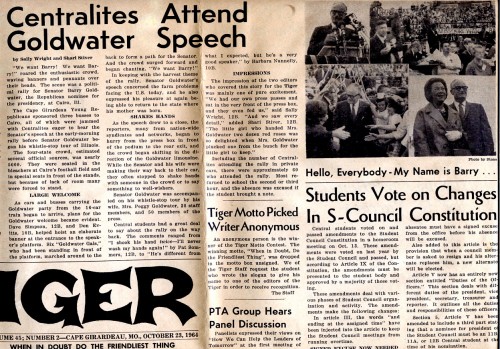 The editors weren’t the only ones excited. They quoted Pat Sommers as saying, “I shook his hand twice – I’ll never wash my hands again!”

Barbara Nunnelly sounded less impressed. “He’s different from what I expected, but he’s a very good speaker,” she said. 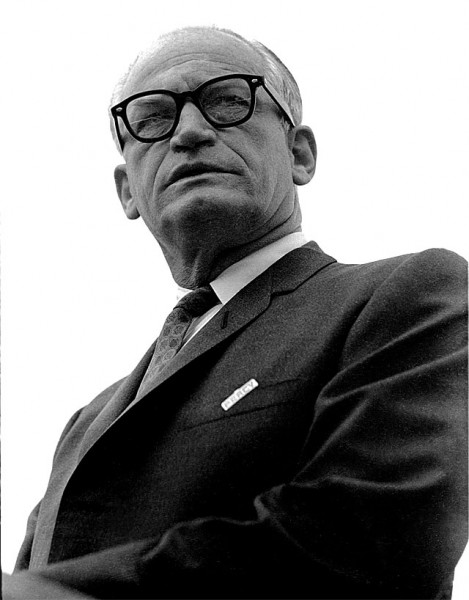 Something that strikes me today is the access the press (and the public) had to a presidential candidate in 1964. You can tell from the variety of angles that I was all over the place. You have to remember that John F. Kennedy had been shot less than a year before. When I looked around the Cairo High School football field where the rally was held, I saw all kinds of places where a sniper could be hiding, and felt distinctly uneasy. 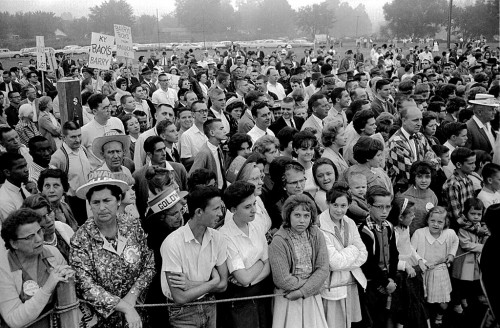 That ability to move around and pick your own photo angles was quickly quashed in the coming years. By the time Jimmy Carter was elected, you had to submit requests for media credentials well in advance of the visit. You had to provide a photo, DOB, place of birth and a whole raft of other info before you got your credential.

What that was mostly good for was so they could herd you into a tightly controlled spot where you could shoot only what they wanted you to shoot, from the angle they wanted you to shoot it, when they wanted it shot. It irked me no end to go through all those security checks only to be kept farther back than the general public and have to deal with a stage-managed photo op. (Can we say, “Mission Accomplished?”)

Not every PR idea works 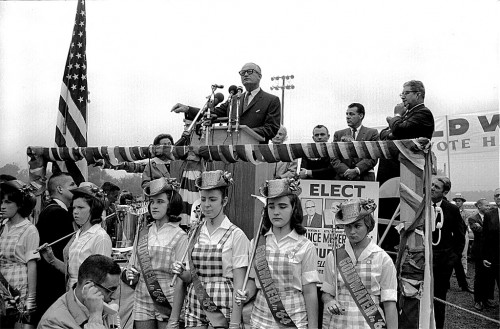 I don’t know if the concept of Goldwater Girls was a local idea or one cooked up by the campaign folks, but it has to go down as a really bad idea. I can just see the girls saying, “You want us to dress up HOW? And be seen in public?”

Hillary Clinton was a Goldwater Girl 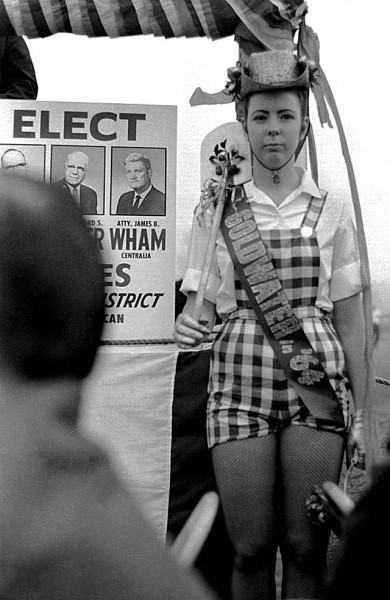 I just Googled “Goldwater Girl” and the first story to pop up was an account of a Charles Gibson interview with Hilary Clinton that quoted her as saying, “My best friend and I became quote ‘Goldwater Girls. We got to wear cowboy hats. We had a sash that said, you know, I voted AUH2O. I mean, it was really a lot of fun.”

Relatives spinning in their graves 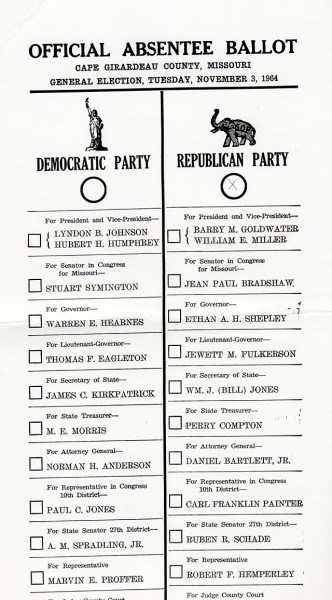 I was an ardent Barry Goldwater supporter. My grandmother, Elsie Welch, was in the hospital before the 1964 election. She said, “I know you wish you were old enough to vote for Goldwater. If you get me an absentee ballot, I’ll cast my vote for him for you.”

I went to the Clerk of Courts, picked up the absentee ballot and took it to the hospital. She made a blue X to vote a straight Republican ticket and said, “I can hear my relatives spinning in their graves because I just voted for a Republican.”

I knew she wasn’t registered to vote, so I didn’t file the ballot just to have it thrown out. I’ve held on to it for all these years as something to remember my grandmother by.

Unless she’s reading this over my shoulder – and I wouldn’t rule that out – she never knew that her vote didn’t count.

As mentioned earlier, click on any photo to make it larger, then click on the left or right side of the image to move through the gallery.