Southeast Missouri State University, which claims to have a historic preservation program but tears down local landmarks, should take a lesson from guys like Chad Hartle and Rick Hetzel.

Rick rescued the historic Kage School from collapse and has made it into a guest cottage for daily, weekly or monthly rental. You can get more information on the property’s website.

The May 10 grand opening attracted hundreds, including some students who attended the school three-quarters of a century earlier. Savanna Maue covered the opening for The Missourian.

I first photographed Kage School in 1966, the year it closed. After the turn of the century (it’s always cool when I can say that), I was drawn back to the building time and time again. To be honest, I was afraid that every visit would be the last one before the brick building collapsed from neglect.

Here’s what it looked like during the grand opening and through the years. Click on any image to make it larger, then use your arrow keys to move through the galleries.

The school had a fascinating history. It was unusual because of its racial and economic diversity. Enrollment included white children from well-established families, the district’s African-American students from as far back as 1889 or earlier and children from the County Poor Farm. The original school was built in 1880 for $1,200 (changes and additions bumped that up to $1,600).

You can read more of the Kage School history here.

Initials scratched in the walls

I never noticed the initials and names scratched in the walls until Brother Mark pointed them out to me. Here are some examples, plus some photos showing the condition of the school. I pointed out when these were taken in 2010 that “the bricks in the chimney are beginning to crumble and there are cracks above a window on the southeast side. If anyone is going to step up to preserve this historic building, they’d better do it soon.”

When I checked out the school in the fall of 2013, the back door was standing open. Since the property wasn’t posted, I took that to mean that I was invited inside to look around. Time, termites and gravity had not been kind, but parts of it were in good shape.

What I found particularly interesting was what was left behind. You’ll see some of the objects – like the green dishes, pencil sharpener, light fixtures and some of the books in the renovated school.

A work in progress

By the spring of 2014, Rick Hetzel had purchased the property from Keith Deimund, who had attended the school about 75 years ago. He launched an army of workmen to repair almost every part of the building, while leaving as much of it intact as possible.

The pine floors were refinished and reinstalled. The original windows were replaced with energy-efficient glass, and foundation stones under the floor were used to create a flower bed out front. Even a baby squirrel discovered by workers Justin Wissmann and Wes Langston was relocated.

Headed for the finish line

When I went back in the fall of 2014, most of the exterior work had finished and walls were starting to go up. Hetzel had the exterior walls sprayed with an insulation that had a high R-value and provided a good moisture barrier

Workers found a wooden block capping one of the interior columns that had the initials of the contractors who built the original school, including the date 1880. I wonder if they ever expected anyone to find it? 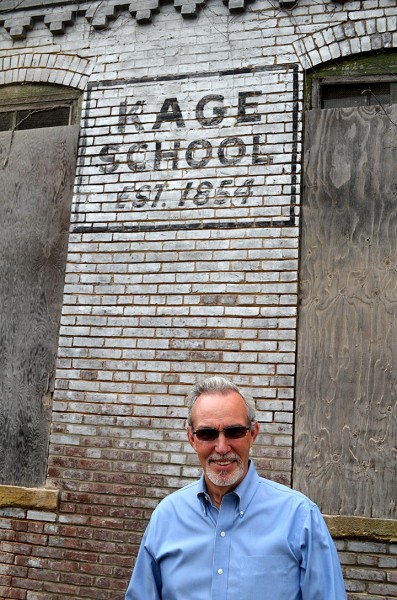 Every once in awhile we win one. The last time I photographed Kage School, I figured it was only a matter of time before the cracked walls would come tumbling down, taking with it a progressive school that educated area children for 112 years. Then, I saw a small notice in the paper that Rick Hetzel had bought the property and was going to rehab it.

Fred Lynch shot a photo gallery of the early stages on March 24, 2014. (He’s a real photographer who has to answer to an editor, so he went to the trouble of lighting the interior. I just wing it with available light.)

Will be used as rental apartment 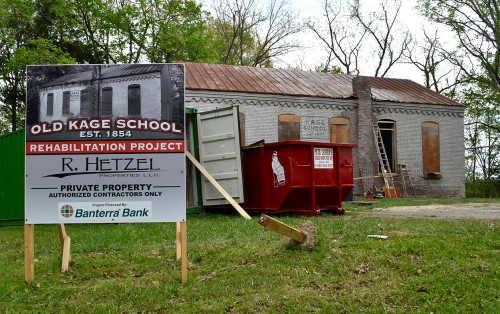 When I got into town, one of my first stops was at the school, where I was lucky enough to run into Rick, who said he was turning it into a rental apartment. I was glad to hear that it was going to be used for an actual purpose instead of becoming a gift shop or mini-museum. Rick is going to keep as many of the original fixtures and furnishings as possible, he said.

He reminded me a bit of Chad Hartle, who took the old Schultz School and turned it into Schultz Senior Apartments, a textbook case of turning a white elephant into something the community can be proud of.

Here are photographs I shot on April 2 and May 2 of the work in progress and the men doing it. Click on any photo to make it larger, then use your arrow keys to move through the images.