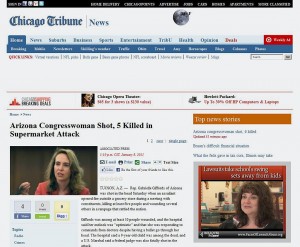 It started with a Facebook post by Bob Rogers, a photographer I worked with in Athens, Ohio, back in the late 60s: “Extremists win by murder. Gabrielle Giffords shot this morning. I hope all who preach hate are happy. You are succeeding in tearing apart our once great country.”

I’m embarrassed to admit that I didn’t know who Garbrielle Giffords was at first. I had to search for the first cryptic stories on Google news to discover she was an Arizona Congresswoman who had been marked by crosshairs on a Sarah Palin website and had beaten a Tea Party candidate who liked to campaign by letting his followers shoot automatic weapons. Bob, who knew her from her work on cycling projects called her a “great centrist public servant.”

As the news reports trickled in, I couldn’t tell if she was dead or alive and the toll of dead and wounded kept fluctuating. I still don’t know the final count.

Two quotes crossed my mind. H. Rap Br own, the black activist of the 1960s, who coined the phrase, “Violence is as American as apple pie,” and a verse from John Fogerty’s anti-war song, Deja Vu (All Over Again): 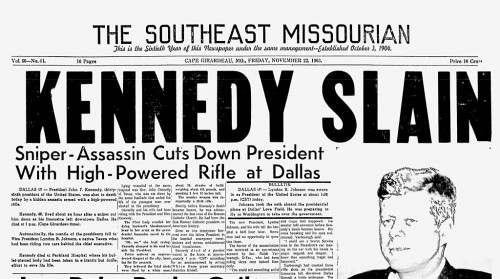 I’ve written before about my memories of the JFK assassination. This was our generation’s loss of innocence. 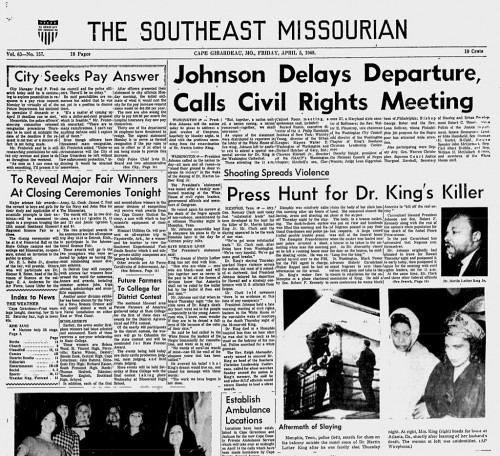 I was photo editor of The Ohio University Post in 1968 when Martin Luther King was shot in Memphis. When I wrote about a Peter, Paul and Mary Concert, fellow campus reporter Carol Towarnicky reminded me that the concert was the night after MLK was killed.

She shared her recollection of the night, “my personal memory of that was that there was some kind of big meeting on campus — wasn’t there always? — and i was alone at the post since i was the campus editor – when i got a call from one of the editors at The Messenger. Their AP (Associated Press teletype) was turned off for the evening and he said he had heard a rumor about King being shot and would i check — and i was just about to get up from my chair when i heard the bells for a bulletin..”

What I most remember was how close the university came to violence. Several hundred black students staged a sit-in in the middle of the major intersection in town. That wasn’t unusual, but an Athens police captain whose face was usually as red as his neck wasn’t going to tolerate black  folks doing that.

He was about to have his men wade into the crowd with billy clubs swinging when a university administrator offered to defuse the situation. He pulled one of the student leaders aside and asked how long the student thought they were going to sit there to prove their point. There was some give and take, then the administrator when back to the captain and said, “Give them X minutes and they’ll move on peacefully.” Fortunately, that’s what happened. 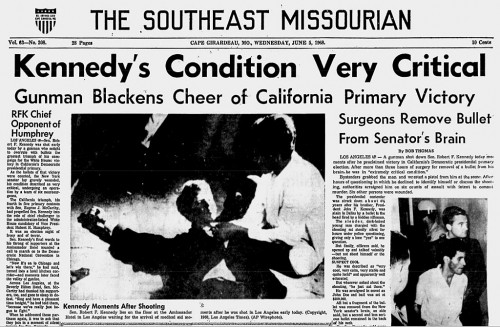 We had just put the paper to bed and a bunch of us decided to walk down town to Jake’s, the only place open late at night. It was known best for its night fry cook, a woman so large she could barely fit between the counter and the grill. When she walked, she was so short of breath her mouth would bite chunks of air like a guppy on its last fins. After having a burger with her special sauce – she dripped sweat onto the grill the whole the time she cooked – we headed back to the office to call it a night.

A student ran up and said that RFK had just been shot. We thought he was kidding or drunk until we got back and checked the wires.

I can’t wait until I get to my negatives of that era. I shot some memorable photos of students reacting to the news of those two murders. 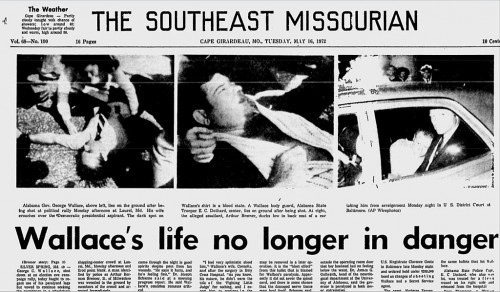 I was chief photographer at The Gastonia Gazette when the news of the attempt on George Wallace’s life came across the wires.

I had just spent several days on the campaign trail with North Carolina governor Terry Sanford, who was a long-shot candidate for president. I really liked the guy. He and Florida Governor / Senator Bob Graham were two men I always hoped would end up in The Big Seat. I hoped that Wallace dropping out of the race might boost Sanford’s chances, but that wasn’t to be. 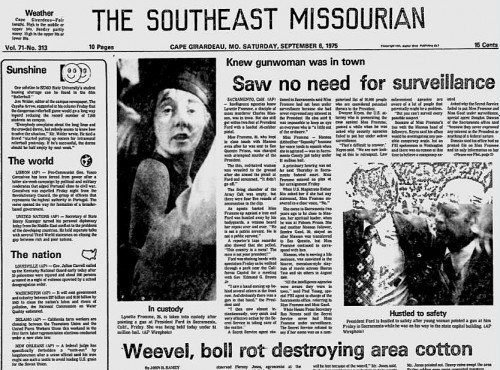 The odd thing about the attempts on Gerald Ford’s life is that I don’t have any strong recollections of covering anything related to them. Maybe by that time shooting political figures had become so commonplace it stopped being something you remembered. 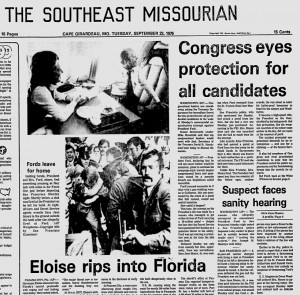 About the only thing I remember about Gerald Ford was when he came to South Florida to campaign for a term of his own. It was a tough sell because a lot of folks hadn’t forgiven him for pardoning Richard Nixon.

The day was unseasonably cold for Florida and there was a steady rain falling as he made it down the coast from one end of the region to the other. I looked at him as he drove by in an open convertible, soaked to the skin by the cold rain, but still waving at everyone he passed. “This guy really WANTS this job,” I recalled thinking.

I ended up voting for him. After the dark Dick Nixon days, I thought he was an honorable man who did what he thought was best for the country, even though it was probably political suicide. 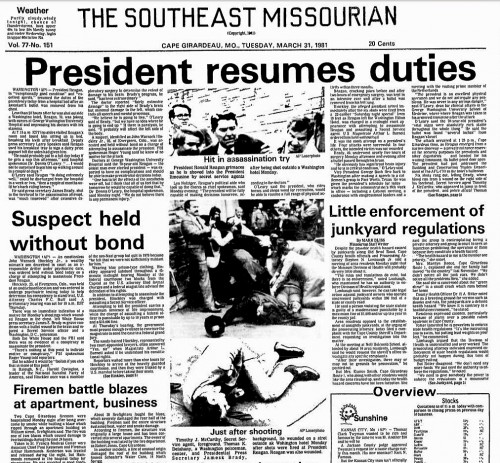 Former President Richard Nixon was supposed to speak at some kind of gathering in Palm Beach. Representatives of the organization, security folks and the local media were meeting to work out the details of the visit when I got a radio call that President Reagan had been shot.

We media types looked at each other, came to the conclusion that a possibly dead current President was a bigger story than a future visit from a disgraced ex-President, so there was a bolt for the doors.

Let’s dial back the hate speech

“We know that silence equals consent when atrocities are committed against innocent men, women and children. We know that indifference equals complicity when bigotry, hatred and intolerance are allowed to take root. And we know that education and hope are the most effective ways to combat ignorance and despair.” ~ Gabrielle Giffords

In one of the rare instances of civility in the last presidential campaign, Sen. John McCain took the microphone away from a woman who said that Barack Obama was “an Arab,”and countered a man who said he was “scared…to bring up a child under an Obama presidency: “I have to tell you that he is a decent person and a person that you do not have to be scared of as president of the United States. He’s a decent family man that I happen to have disagreements with on fundamental issues. There’s a difference between rhetoric and record, but you can still be respectful. I will point out his record and I will do it with respect.”

His comments were met with boos.

30 Replies to “As American as Apple Pie: Shooting Gabrielle Giffords”