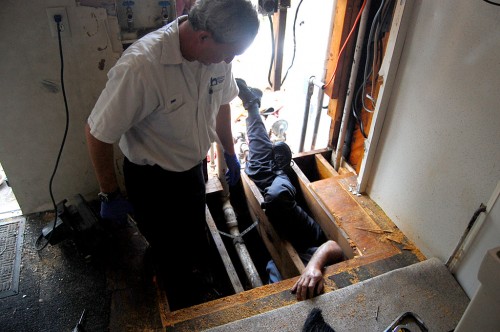 I posted a mystery picture yesterday of a crowd of people, including some of my classmates, taken in Cairo, Ill., on Oct. 2, 1964. I asked if anyone could tell me what the event was (for once, I actually knew).

Some of you guessed correctly that it was Barry Goldwater campaigning for President.

I promised more photos today. It ain’t gonna happen. It’s after two in the morning and I’m going to bed. I have some pictures I really like, but the film has lots of scratches and dust spots, so it’s taking longer to edit that I thought. Then, there were other complications.

Here’s how my day went 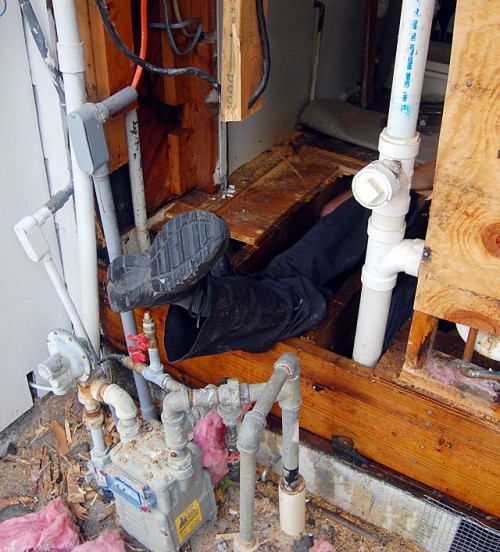 Lila’s brother, John Perry, usually comes down to Florida about this time of year to thaw out and to help us out with whatever home repairs the various Steinhoff families need doing.

Things never turn out as simple as we plan. Here’s what happened when he came down to replace some floor tiles in our kitchen a couple years ago.

This year we had a couple pieces of rotted siding on the back of the house we wanted him to repair and replace with vinyl siding. Sounded like something he could knock out in half a day. Florida Rule: never look behind the walls or under the floor of an old house; you are sure to see something you’re happier not knowing about. 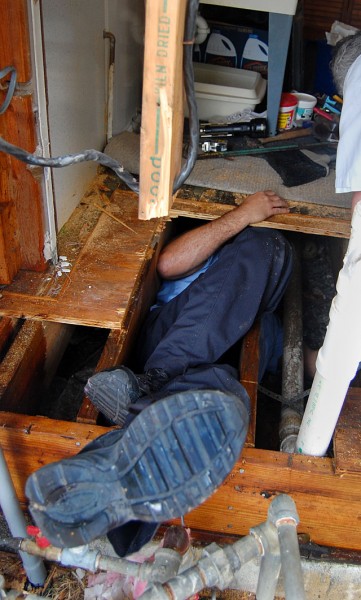 When he pulled off the siding, he found evidence of termites. We called the exterminating company that’s supposed to squash those kinds of things. They said, and John concurred, that it was old damage and not to worry about it.

John pulled off some more boards. This time we see little white wiggly things in the wood. We make another call to the bug boys. Sean and John B (B for Bug, to differentiate him from John P for Perry) show up.

John P. loves to destroy things, so he started cutting a hole in the floor to see if there was any damage under the plywood subflooring. John P, with a crowbar in one hand and a Skil Saw in his other hand, persuaded John B. to crawl under the house.

Now, John B. isn’t a big man; he’s not a small man, either. Those floor joists are on 12-inch centers. Once he got under the floor, we were afraid he was going to take up permanent residence. I could envision throwing him a sandwich every day at quarter past two, like Charlie’s wife had to do for Charlie, who was trapped on the MTA. (Kingston Trio reference.)

John B.’s partner managed to grab hold of his belt and drag the poor man out of the hole before John P. started nailing plywood over the top of him. I captured part of the escapade on video, but missed some of the initial struggles that were hilarious (if you weren’t John B.).

If John P. doesn’t find more stuff to distract me, I’ll finish up Barry and the crowds tomorrow.

8 Replies to “Not Barry Goldwater”