Dad’s construction company had a couple of simple tasks:

Both tasks taken individually were routine. The catch came with Task 2. The old bridge was between the new bridge and some big phone lines. It would be a Bad Thing to take out either of those things. (You can click on the photos to make them larger.)

Things were kind of tight 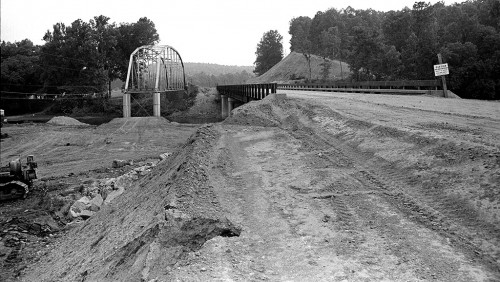 The phone and electrical lines are hard to see, but they are about as far from the old bridge on one side as the new bridge was on the other. If the bridge toppled over, it would hit one or the other. 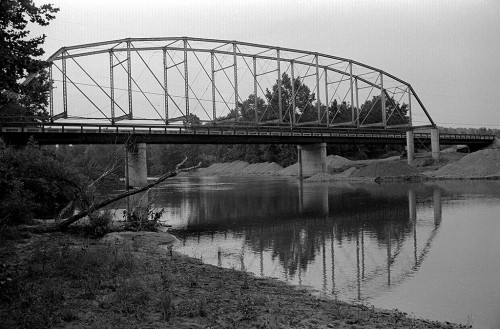 Dad said the bridge had to drop straight down. If they used cutting torches to take it down, there was no assurance that it wouldn’t twist if one side let loose before the other. Dad decided they’d dynamite it. This was in the days before building implosions and blasting were used much for this kind of thing.

There’s a lot of rock in Missouri, so explosives weren’t an unknown to him. In fact, I remember taking a length of blasting cord to school for a show ‘n’ tell. It was neat how the orange-colored fuse would burn under water.

Dad didn’t like handling dynamite, which is basically sawdust soaked in nitroglycerine and compacted. He didn’t like it, not so much because it was dangerous, but because the nitro would “sweat” out of the sticks of dynamite and give him a headache.

Dad would let me hold a stick of dynamite, but he warned me to never touch a blasting cap: they were just too sensitive to handle casually. Since he let me do so many other things that some people would consider dangerous, I took his warning seriously.

Crimp the blasting caps with your teeth 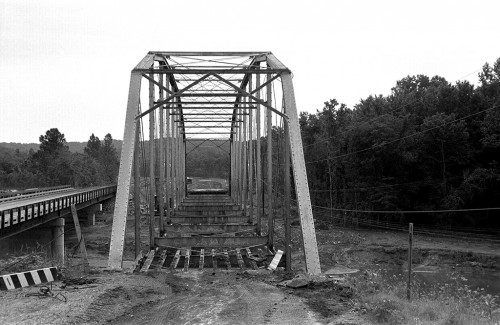 The old style fuse like you saw in Road Runner cartoons used blasting caps that were metal cylinders that were open on one end and closed on the other. The fuse would go into the cap and then be crimped down. Oldtimers would use their teeth to make the crimp. You can see how that could go wrong, right?

The first task was to remove the approach on one side of the bridge, and to take off as much steel and flooring as possible. Brother Mark has some of the steel in his backyard garden in St. Louis.

We’re ready for the show 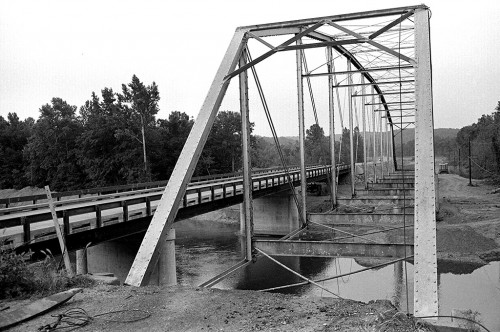 When the bridge was reduced to a skeleton, explosives were set on two key trusses at one end and everybody stepped back with fingers crossed.

Watch the video to see how things went. Dad was playing cinematographer with the family’s Bell & Howell 8mm movie camera, so the quality wasn’t all that hot to begin with. It’s subsequently been moved over to VHS tape and then digitized, so don’t expect IMAX 3D.

All went according to plan. The bridge dropped like a rock and remained standing upright between the new bridge and the wires. You can see that the next step was for a worker in a hoist at the end of a crane to start cutting the steel into manageable pieces.

That also went mostly well. Right up until one bad cut caused it to collapse unexpectedly. You can tell it was unexpectedly because everybody started running. A good portion of that area’s phone calls were cut off abruptly.

It’s fortunate that this was a silent movie because I imagine Dad’s narrative at that point would have made it non-PG-rated.

Dad came home cranky one night from another blasting project that didn’t go exactly as planned.