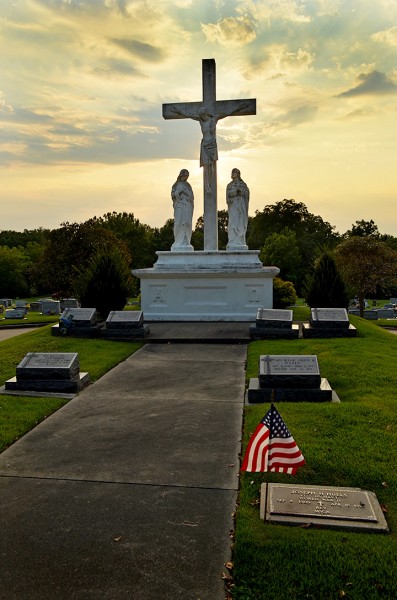 Sunday was a lazy day. I slept late, ate breakfast, went to get dressed to go out and slay dragons, but as soon as I sat down on the bed, the sheets and blankets wrapped themselves around my resisting body and dragged me down until I just couldn’t fight them off any more.

After my nap, I puttered around the house for a bit, but it was pretty late in the afternoon when I managed to actually let sunlight hit my body. I cruised around checking out a couple locations filed away as being possibilities, but they were dry today.

When I turned into St. Mary’s Cemetery off Perry avenue, it were getting close to sunset. I used the shadow cast from the cross to block out the direct sun to keep from getting lens flare.

Something kept telling me that statute looked familiar. Yes, indeed, this was taken August 24, 1967, almost exactly 48 years ago, and at pretty close to the same time of day. It had been floating around in the miscellaneous scans folder for four or five years because I wasn’t sure where it was taken.

Either my technique or technology has gotten better in the last half century because the recent photo is much better. (Curator Jessica will recognize my style at once. She’s figured out that I’m a sucker for backlit flags.)

I have an aerial photo of the cemetery in an earlier post. And, as always, you can click on the photos to make them larger.