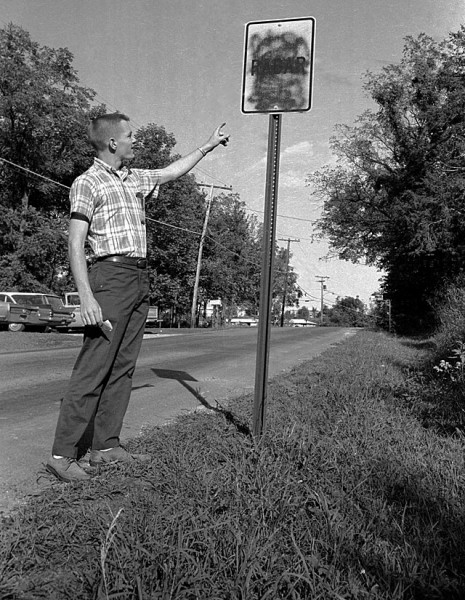 I tried to find out when Cape added radar to its arsenal of speed-fighting tools, but came up empty. I DID see a story in The Missourian Aug. 29, 1957, saying that Missouri had set an upper speed limit for the first time. It and Kansas had the highest speed limits in the country – 70 mph.

Before any of you question that statement, Arizona and Nevada didn’t have top state-wide speed limits; they required “prudent driving.” Iowa had no daytime limit, but dropped to 60 mph at night.

In this traditional Pointing Man shot, neighbor Eddie Ailor gestures at a defaced RADAR sign that was in our block on Kingsway Drive. That’s my house with the 1959 Buick LaSabre station wagon and the Dad’s Chevy pickup truck in the driveway. It’s funny how I didn’t remember the sign being there until I ran across the film. 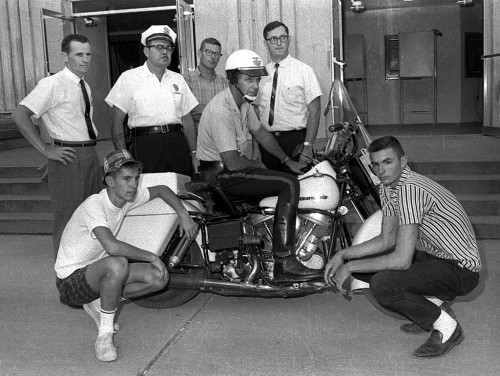 This picture was taken in front of the Arena Building. It, like the shot above, were stock-trade-hack newspaper photos. Obviously, I was sent out to shoot a bunch of people pretending to interact.

I love the expression on the motorcycle cop’s face. He looks like he’s thinking, “I’m gonna give these boys two blocks head start, then they’re mine.”