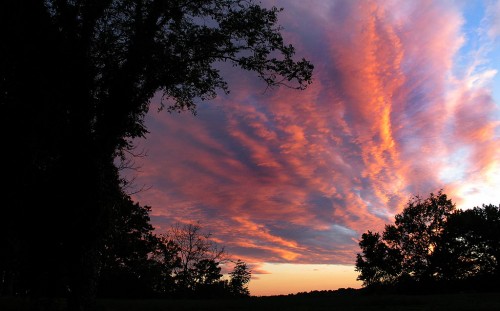 Way back in Boy Scout Troop 8 days, we learned all kinds of useful sayings:

Don’t take my word for it. The Library of Congress’s Science Fun Facts has the answer. 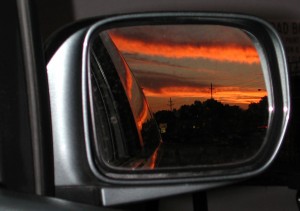 When we see a red sky at night, this means that the setting sun is sending its light through a high concentration of dust particles. This usually indicates high pressure and stable air coming in from the west. Basically good weather will follow.

A red sunrise reflects the dust particles of a system that has just passed from the west. This indicates that a storm system may be moving to the east. If the morning sky is a deep fiery red, it means a high water content in the atmosphere. So, rain is on its way.

[The rearview mirror shot, by the way, was taken by Wife Lila while she was waiting for me to come back to the car from somewhere.]

“Leaflets three, let it be” is good advice

Dad and I were some of the lucky ones apparently immune to Poison Ivy. He would reach up and pull down the vines with his bare hands. I was never brave – nor foolish – enough to do that, but I didn’t go out of my way to avoid the plant. Mother, on the other hand, would break out in a rash if she just looked at the leaves hard.

How about that snake thing?

Wikipedia says that coral snakes are most notable for their red, yellow/white, and black colored banding. (Several nonvenomous species have similar coloration, however, including the Scarlet Kingsnake, the Milk Snake, and the Chionactis occipitalis annulata.) 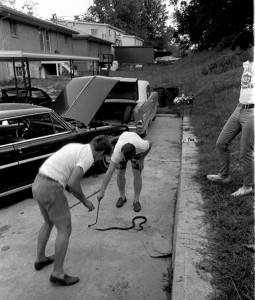 In some regions, the order of the bands distinguishes between the non-venomous mimics and the venomous coral snakes, inspiring some folk rhymes — “Red on yellow, kill a fellow; red on black, friend of Jack” (for similar looking Milk Snakes).

However, this only reliably applies to coral snakes native to North America.

Coral snakes found in other parts of the world can have distinctly different patterns, have red bands touching black bands, have only pink and blue banding, or have no banding at all.

I never saw a coral snake until I moved to Florida. Had I seen something that COULD have been a coral snake, I wouldn’t have bothered to pull out a color chart. I’d have beat feet.

In less enlightened times, the standard Southeast Missouri response to seeing a serpent was to kill ’em all and let God sort them out.

I was never so happy as when I found out that The Missourian had a no-snakes policy. At The Jackson Pioneer, it was common for Billy Bob to pull up in front of the paper to have someone (usually me) take the obligatory photo of him holding a dead snake at arms-length.

The Moon is “holding water”

Dad used to look up at the sky and say, “The Moon is holding water,” meaning that the crescent Moon looked like a basin that was holding rain.

I could visualize the symbolism, but never knew the full association. The folks over at NASA say different cultures assign different and confusing names to the crescent moon.

Some ancient skywatchers spoke of the crescent Moon when the bottom seems to be lit as the “wet moon”. They thought it looked like a bowl which could fill up with the rain and snow of the winter season. In Hawaiian astrology, Kaelo the Water Bearer rules from January 20 – February 18. According to the Hawaiian Calendar, Kaelo is the “Dripping Wet Moon” month. However, many other cultures have defined the Moon when lit on the bottom as the “dry moon” since in that configuration, the Moon is “holding in the water”.

As winter passes into spring and summer, the crescent shape slowly shifts toward the south and begins to “stand on its end”. To some ancients, this represented the Moon assuming a pouring position in which it will lose its water and result in the great summer rains. The result was the creation of a “dry moon”, one which held no water because it all poured out. On the other hand, other cultures said that such a moon is a wet moon because it allowed the water to pour out!