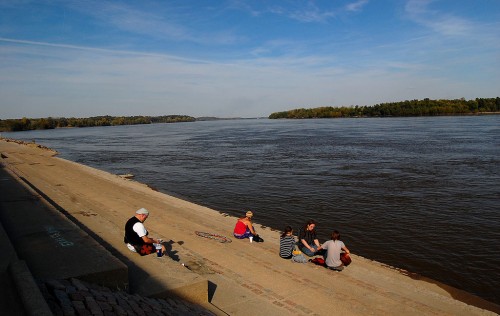 Today was too pretty a day not to jump on the bike. I had some great conversations along the way that are going to turn into some interesting stories.

Few of my bike rides don’t end up without a stop at the Mississippi River. Even if you aren’t moved by the power of the river, it’s a great spot for people watching.

I encountered an elderly trio watching a northbound tow. The two women were eager to get shopping, but the man was comfortable watching the string of barges go by. When I asked where they were from, they gave the name of a small town not far from Cape.

Too lazy to steal

“I went to school with a boy from there” and told them his name. For reasons soon to be obvious, it’s best if I don’t mention the town or the friend.

“He grew up next to us. I’ve known him since he was this high,” the man said, with a gesture. “He was so lazy his mother had to mow the lawn.”

“Sounds like my buddy, all right. We always thought he was too lazy to steal, but he became a lawyer and proved us wrong,” I said. 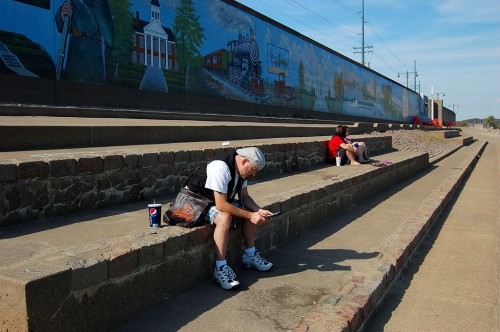 My eye was drawn to Race Bradley who was reading a book on his Barnes and Noble NOOK eBook Reader. Race ought to sell them because he gave a lot of good arguments for his WiFi version.

I was disappointed to find out that he wasn’t reading Mark Twain.

Music along the Mississippi 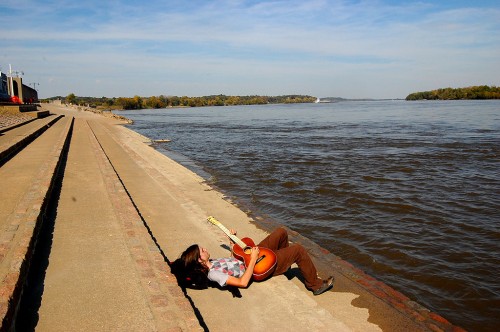 When I first spotted Daniel Atwood, he was all alone strumming his guitar, with his feet almost in the wake splashed up by the huge tow. Before long, he was joined by some of his friends.

Daniel is a musical free spirit who said he had played in some bands, but wasn’t looking for conventional commercial or monetary success. “I live to play,” he said. He doesn’t even need an audience:  he likes the impermanent nature of live music. “It’s here, then it’s gone.”

The group seemed a little cool to this interloper until I mentioned that I had shot Pete Seeger in 1977. “You SAW Pete Seeger?” one of the guys said, reaching out his hand.

“Yep, go to my Cape website, enter Pete Seeger as a search term and you’ll see him playing in White Springs, FL. If you go to my bike site and search for Peter, Paul and Mary, you’ll see them playing Ohio University the day after Martin Luther King was shot.

After that, we had a great discussion about a variety of musicians and types of music. I really enjoyed my hour on the riverfront.

Reminded me of Amy Murphy 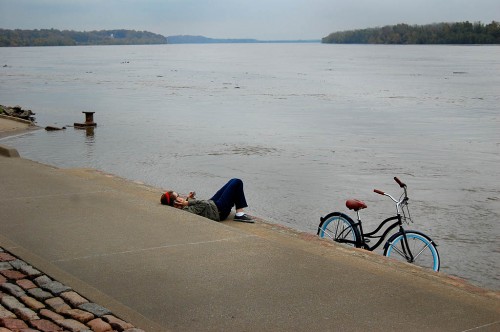 The afternoon reminded me a bit of meeting aspiring actor Amy Murphy last year at this time. I’m still waiting for her to become famous.

8 Replies to “Down by the Riverside”