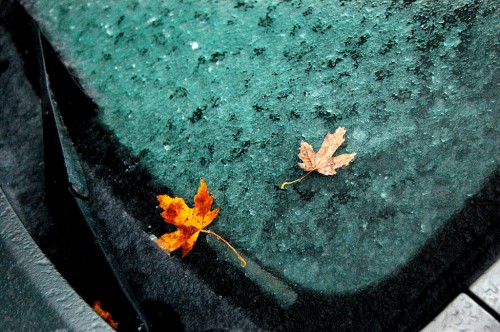 Mother and I had to journey over to Kentucky Lake this morning to meet a plumber who was going to winterize her trailer.

For you Sunbelt Readers (I’m talking to YOU, Jan), that’s where you drain all of the water out of the pipes, then blow antifreeze in them until pink stuff spews out the faucets. You drain the toilet bowls and put antifreeze in them, too. If you don’t, and if you don’t have heat turned on, the freezing water in the pipes will expand and cause them to burst. The purpose of pipes is to keep liquid inside them. Pipes that have burst fail in that purpose, as we found out when I turned the water on this spring. It is an unpleasant and expensive thing to fix.

You can click on the photo to make it larger. I actually like it. For the record I did NOT put those leaves there. Sometimes I think there’s a Higher Power who looks at a Florida photographer with sleet bouncing off his follically-challenged head and says, “You know, I’m gonna cut him some slack:’ Leaf, it’s time for you to go anyway, land where it’ll do him some good.'”

When we left Cape around 8:30 a.m. it was foggy, misting rain and about 38 degrees. On the way to the lake, it alternated between misting and pouring. Creeks were running out of their banks, so Illinois and Kentucky must have gotten a lot more rain than we did. By the time we got to the trailer, the temperature had dropped to 35 and the rain looked like it might have something mixed in it. I started raking and blowing leaves to get them off the deck and away from the trailer. I spent two weeks in Seattle and didn’t get a drop of water on my new Marmot Precip Rain Jacket, but it paid for itself today. I stayed dry and reasonably warm and the built-in hood kept water from running down my neck.

The only problem with blowing wet leaves off the north side of the deck when the winds are gusting to 36 mph FROM the north is that the wind hits the side of the desk causing an updraft. That carries your blown leaves up in the air. Then the north wind blowing horizontally flings the leaves right back at you. It was a lot more fun for somebody to watch than it was for me to do it.

What’s that blue stuff on the radar?

While we were waiting for the plumber to do his magic, I called up the radar and saw that we were surrounded by blue. We don’t get any blue on our radar in Florida, so I had to look at the legend. It said it was snowing on us. I didn’t see how it could snow in a rain storm, so I didn’t get excited.

Then I switched over to Facebook and saw that KFVS had asked people to submit their photos of ice, snow and slush. There were a gazillion comments from people reporting snow, freezing rain, slush and ice pellets. This sounded Not Good. We saddled up the pony and headed back home, still not expecting much more than rain.

About 40 miles from Cape, I started seeing suspiciously large raindrops that floated. The closer we got to Missouri, the more ice pellets and snowflakes we saw. When we pulled into the driveway at about 4 p.m., the snow was falling like crazy. We unloaded the car, and I walked over to my van, which had been sitting since yesterday. It reinforced those signs you see that say, “Bridges Freeze First:” the hood and windshield were coated with the slush you see above.

So, in the space of less than eight hours, we saw just about every form of Missouri weather short of sunshine, hail and a tornado.