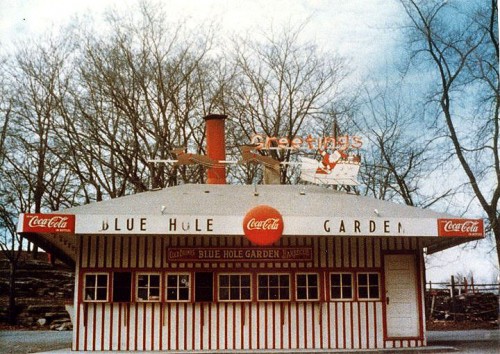 Sue Roussel, keeper of the flame for the 1950s Centralites, read about my quest for a photo of the original Blue Hole Garden BBQ on S. Sprigg and sent me this one.

My dad and I ate many “brown hot” sandwiches off tin Coca Cola tins at this joint. (The “brown” meant that it was made with the outside meat; the “hot” meant you wanted hot sauce.) The limestone bluffs behind the restaurant were great for a kid to climb.

Just west of the Blue Hole was the Blue Hole quarry, for which the restaurant was named. There was a tiny, steep gravel road that led right next to a deep, deep, dropoff that we would navigate to the top of the hill overlooking the deep pit to get to the “worm man.” He had the biggest, most lively earth worms I’ve ever fished with. 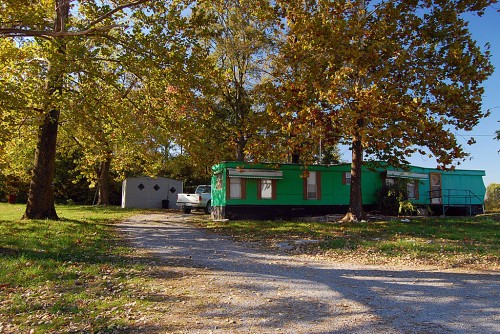 Here are some Missourian Out of the Past column notes about the Blue Hole Quarry and BBQ over the years. Thanks to Sharon Sanders for saving me a bunch of work hunting these down. 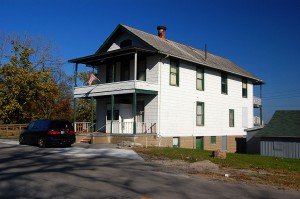 This building was across the street from the Blue Hole. I thought it was an office for Federal Materials, but the 1978 City Directory calls it the Southeast Missouri Stone Co.

The two most unique barbecue sauces in the Cape area (at least, in my opinion) were the Blue Hole and Wibs. The Wibs sauce has more of a bite; the Blue Hole sauce was a little more watery, but still had a good taste.

It used to be sold in grocery stores in the area. In 2005, a Missourian reader asked if the recipe was still around, being preserved by a group of fans.

Jon Rust responded, “As it turns out, you’re right. There is a secret group that is keeping the Blue Hole recipe alive. Lizbe Knote, whose mother, Ruth, is a judge for some of the United States’ most elite barbecue competitions, including Memphis in May and the American Royal Barbecue Contest, told me that they identified the sauce eating barbecue one day. This tidbit of information led to several twists and turns, and several people who would not speak on the record. The recipe, it turns out, was sold to a man in Blytheville, Ark., who produces sauces but chose not to market this particular one. So, folks who make it here can’t sell it, but they can provide it to friends and make it for themselves.”

At some point after the original Blue Hole closed, a new one opened just down the street from Central. I used to walk down there for lunch on a regular basis. It’s a TitleMax office now. 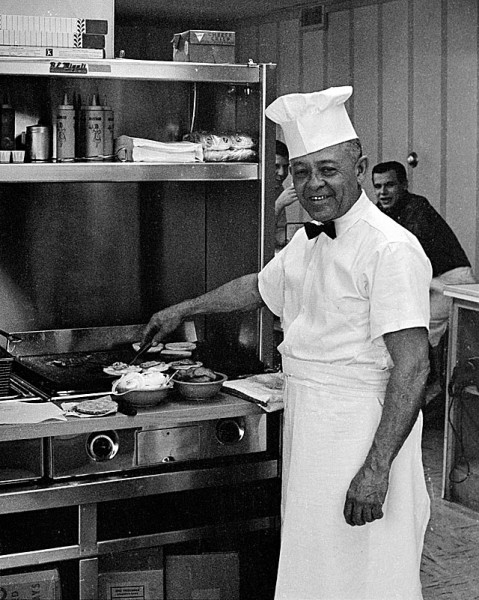 I don’t know who this cook is. I shot him at the Blue Hole near Central High School when I slipped out for lunch one day.

My search for stories about the Blue Hole snagged several obituaries for men and women who had worked there. 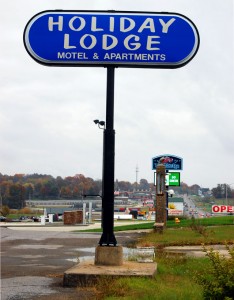 After this was published, Gregg Hopkins posted the following comment: “Loved Blue Hole BBQ if I was in Cape, Wib’s if I was in Jackson. The only location I remember was on the East side of Kingshighway. They had curb service. The old sign there became the sign for the Golden Eagle Motel (I think that is the name) on north Kingshighway, but has been replaced in the last five years or so.”

I had heard the same story and had, in fact, taken a photo of the sign last fall. The motel manager didn’t know anything about the history of the sign, so I don’t know if it was recycled from the Kingshighway Blue Hole location of not. Maybe someone else knows for sure.