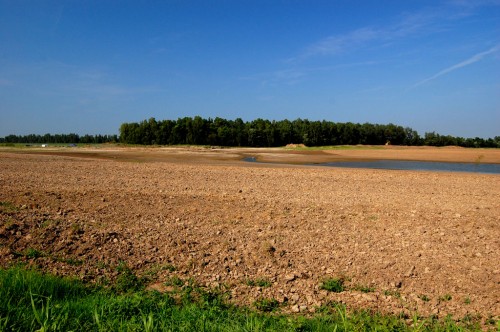 I was working on a project that sent me on a wild goose chase to Wilson City, east of Charleston and west of Cairo off U.S. 62. Had the bridge not been closed, I could have been in Cairo in less than 10 miles. Mother was along for the ride, so I told her we should go down to see Bird’s Point since we were so close. I plugged it into the GPS and we were off on an adventure.

As best I can piece together, we came off 62 on Mississippi County Route 301, drove until we saw some work being done in the distance on the levee, but decided not to ignore the signs warning us to keep out. We kept on CR301 until it hit CR302, then went up on the levee, which was called CR 303. Along the way, we saw some signs that water had been in that area, but we also saw lots of freshly-planted fields. Click on any photo to make it larger.

I’m guessing the road was closed because old remains had been found along one section of the levee. The Missourian reported that the Osage Nation American Indian tribe has been involved in the investigation, leading to the assumption that the bones and relics were part of a native tribal settlement. The Department of Natural Resources has put a blackout on news of the finds at the request of the Native American tribes involved in order to protect the site from looters.

We saw scores of wading birds taking advantage of the fish trapped in water left behind after the flood. 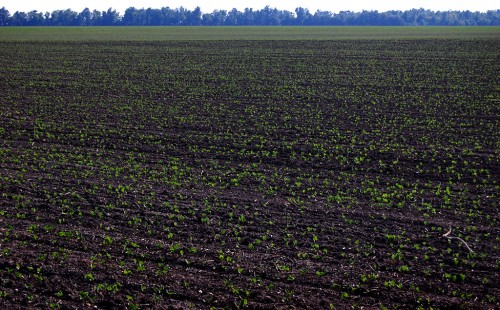 Despite dire predictions that the fields would be ruined for decades, we saw plenty of evidence that farmers were able to plant a lot of crops as soon as the fields dried out. In fairness, we only saw a tiny fraction of the land that had been flooded. I’m sure there ARE parts that have been turned into moonscape and are buried under huge deposits of sand. My point is that not ALL of the land has been ruined. 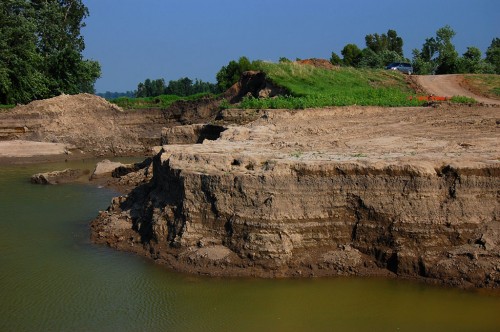 CR 303, the levee road, ended abruptly at one of the places it was breached. The massive flow of water gouged deep holes in the ground. My van parked atop the levee will give you a sense of scale. I’m guessing the levee is about 15 feet above surrounding terrain. The bluff in the foreground are 15 or 20 feet below that, and I don’t know how deep the water is in the pit. 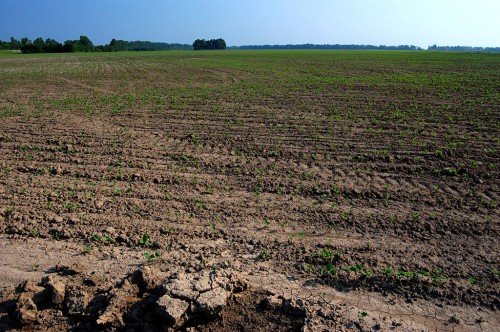 As impressive as that is, if you turn 180 degrees and look the other direction, the fields are clear and have been planted. I don’t know how much work it took to get them into that condition, but looking at the gouged earth without looking at the planted fields will give you the wrong impression, and vice versa.

Equipment at the ready 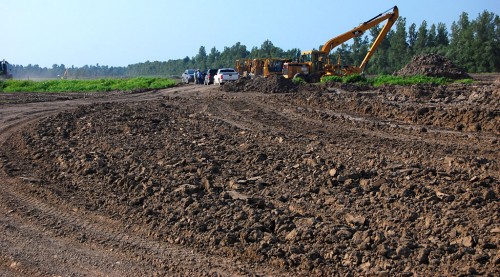 I don’t know if this equipment belongs to farmers or if it’s there to repair the levee. I didn’t want to interfere with whatever work they were doing, so I didn’t go down to ask.

Click on any photo to make it larger, then click on the left or right to move through the gallery.