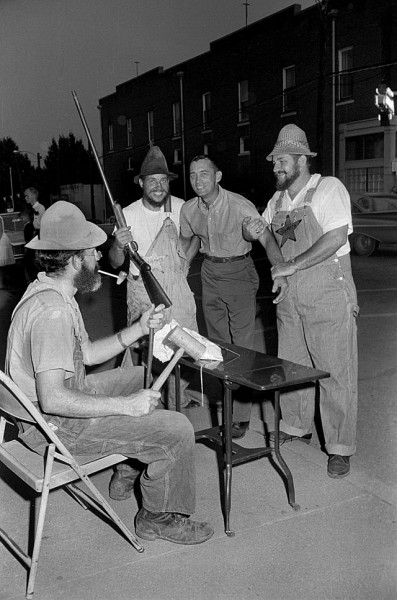 I wasn’t exactly sure what was supposed to happen Saturday night. Was there going to be earthquake? Zombie invasion? People headed to heaven?

At any rate, I decided to hedge my bets and not do a blog post before heading out for a bicycle ride on Lake Okeechobee with three friends. I mean, why work if you’re not sure anybody is going to be around to see it in the morning.

When we got back to town around 1 a.m., it was obvious that I still had readers left and that I was going to have to post something.

Is this a zombie capture?

I have no idea what’s going on in this photo except that three guys with beards, two of them sporting stars that say “Deputy” have captured a clean-shaven guy who looks and dresses nothing like them.

It must be an alien or zombie roundup of some kind. They are obviously capturing anyone who doesn’t fit in with their community.

The buildings in the background feel like Jackson, but I’m open to other ideas.

Since most of the towns, churches and institutions in the area were founded at about the same time, we had lots of centennial, sesquicentennial, wanna-be-enial celebrations. Some of them required men to grow beards or other facial hair or buy a badge that exempted them. This looks like one of those events. Does Brothers of the Brush sound familiar?