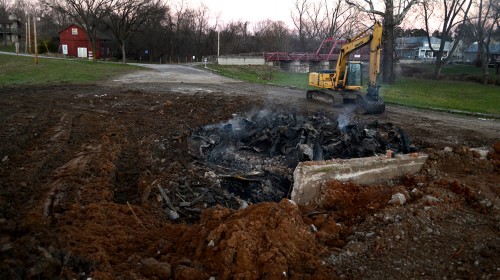 A reader sent a message this morning, “Ken, as I drove down 61 this morning, something was missing. I think the Silver Dollar Tavern has been razed.”

I needed to get an oil change and run some other errands, so it was almost dusk when I got up there. Indeed, the Perry county landmark was nothing but a heap of twisted, smoking debris.

I always liked seeing the old silver-clad tavern, but I have to admit that getting rid of it opens up a nice area for a park, something the town is talking about developing. As always, you can click on the photos to make them larger. 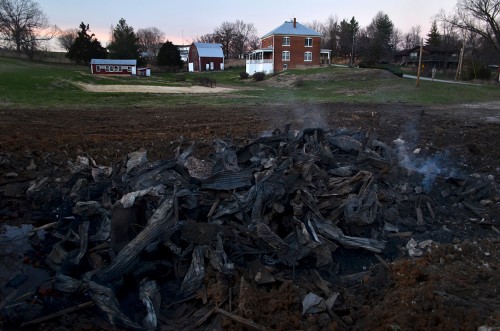 Larry Hull, whose trucking company was tasked with razing the building, said the city was afraid someone would get hurt prowling around inside the old structure or that vandals might torch it, with the danger that the fire could spread to other buildings.

They started tearing it down Saturday after making sure there were no environmental hazards that would create a problem. 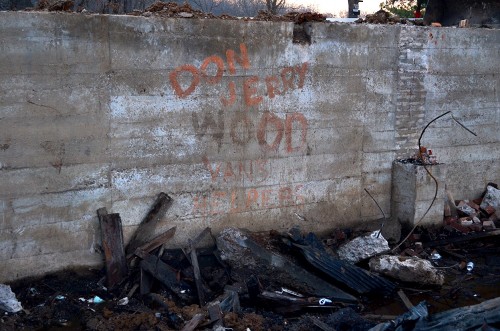 I’m not sure if the names painted on the west basement wall are for three guys, Don, Jerry and Wood, or if Wood is a last name. Whoever they are, they were “Van’s Helpers,” probably referring to Van Ferral, who bought the tavern in March, 1965.

Basement will be filled in 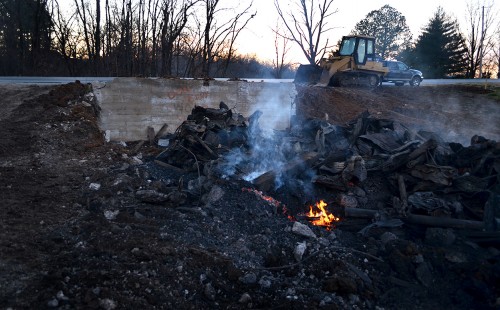 Once the debris stops burning, the basement will be filled in and the bank smoothed down. Within a few years, only memories will remain of the old watering hole that had been around since at least 1948. 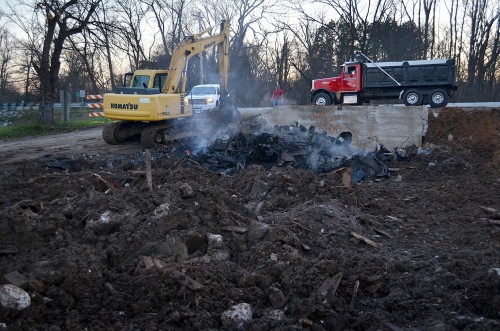 Y’all owe me a pair of shoes

I was being very careful walking around the mud, trying as much as I could to stay on what looked like gravel. That worked great for awhile, but, eventually, I heard a “SLUURPPP” sound as my foot hit a spot that WASN’T gravel and I felt cold, wet mud the consistency of chocolate pudding well up above my ankle. It wasn’t gumbo enough to suck my shoes off, but I don’t think I’ll be wearing them to church any time soon.

That’s a subtle plug to ask you to use that little yellow DONATE button at the top right of the page.