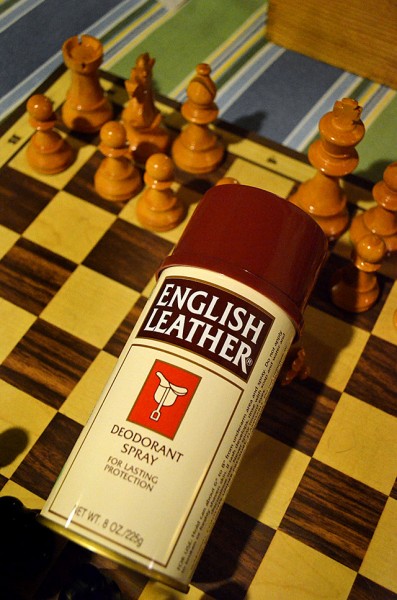 Dad and I were English Leather guys. I think there is still a bottle of English Leather powder on a shelf in the basement shower room. It was traumatic when Wife Lila came home from shopping one day to break the news that English Leather spray deodorant was nowhere to be found. She bought the last couple of cans in the world.

This can has been sitting on the bedroom dresser for at least a decade. [Editor’s note: Wife Lila, while proofing this, said “two decades.”]

I reluctantly switched to another brand that I don’t like half as much as English Leather, and I set this one aside for who knows why.

After much nagging to “get rid of that stuff before it explodes,” I gave myself a couple squirts last week. It’s as good as it always was.

An ad for the cologne (which I never wore) describes the scent: “Bring out your deep, masculine side with English Leather by Dana. This unforgettable cologne for men mixes citrus, woods, moss and leather scents for a rich and masculine blend that can last the entire day. Introduced in 1949, this casual scent brings a classic elegance to your everyday interactions. Apply it before you leave the house for an informal outing and enjoy the sense of rich manliness it brings to all of your personal encounters during the day.”

I’m not sure I’d describe it exactly that way; to me there’s a hint of a smell of talcum powder attached to it.

Some non-spray products are available on Amazon (if you click on the link to order, I get a small piece of the action and it doesn’t cost you extra).

Speaking of after shaves, do you remember Old Spice? It came in a white glass bottle with a plastic stopper that would pull out so you could splash a little on your palm and then rub it on your face after shaving. It had enough alcohol in it that you would know immediately if you has scraped anywhere. I would almost swear the stopper and print were blue.

Alas, Old Spice is still available, but it’s not the Old Spice that we knew and loved, according to Amazon reviewers who rate it a 4-1/2 out of 5 stars.

Here’s a typical 2-star reviewer: “Old Spice was originally produced by Shulton, a New Jersey company. The Old Spice brand was purchased by Proctor and Gamble in 1990. P&G reformulated Old Spice to work with the plastic bottles a few years later. If you have memories of the Shulton Old Spice scent, you will find the new stuff to be evocative, but decidedly brighter, more floral and powdery. The original Shulton was deeper and spicier. The new P&G Old Spice “classic” after shave and cologne are not terrible products, but they are not ‘the same as they always were.‘”

I rarely used Old Spice, but my Grandfather Welch did. I thought of him every time I smelled it.

Maybe that’s why the product description reads, “Old Spice Cologne has been around for generations. If your grandfather hadn’t worn it, you wouldn’t exist. Neither would velvet paintings, the chili dog and sheepskin rugs — manly things that were made by men who smelled strong and splashed Old Spice cologne on their faces before doing other manly stuff during their day.“