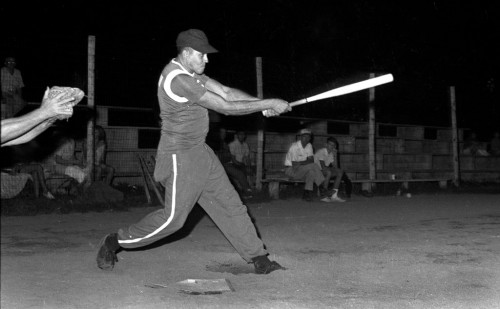 All the big hoopla about the blown perfect game brought my attention to a bunch of baseball and softball pictures I debated not running because the negatives were in lousy shape.

Then, I figured if an umpire can make a mistake, then maybe I’ll make one by letting you see my bad pix.

Playing baseball next to gravestones 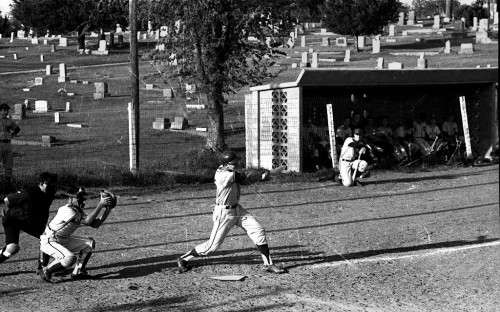 This must have been taken at Notre Dame High School near the New Lorimier Cemetery. Because of the unusual location of the game, I left it in even though it is scratched all to pieces.

They take the game seriously 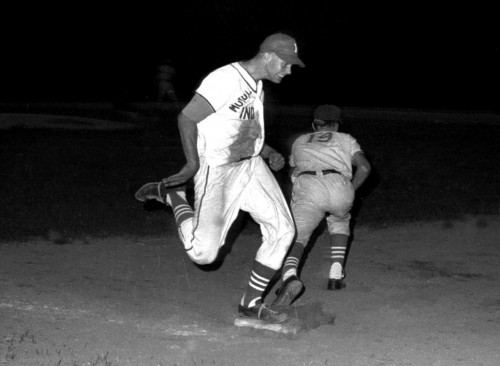 You’d think the World Series was on the line from the way some of these guys are giving their all. I learned later that shooting batters swinging away at the plate is the photographic equivalent of shooting fish in a barrel. Real sports photographers would rather get photos of plays on base.

The only problem was that most of the games I shot were at night, so I had to shoot something fairly close. I’d love to have been able to sit back with a long lens and wait for something great to happen, but (a) I didn’t have a long lens and (b) most of those fields were DARK, way too dark to shoot available light with the film available.

That’s why there are lots of swinging shots 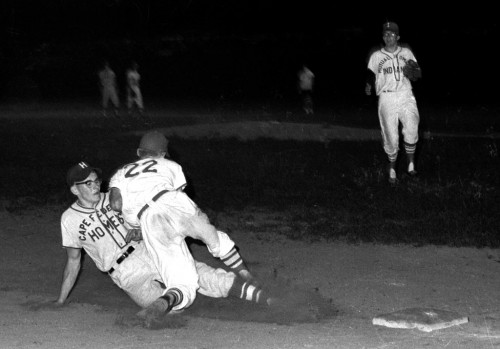 I loved it when something happened in front of me, but I usually had to go for the safe shot so I could get to another game or home to process my film.

Before I became a regular newspaper photographer covering games for $5 a shot, I would go to little league games and shoot kids batting. I’d process the film and go back to the next game and try to sell prints to the parents. I ran across some of those left-over prints the other day and I think they were priced at less than a buck for a 3-1/2 x 5-inch print. I made enough to cover my expenses and a little more.

Because of my equipment limitations, I would crouch down about 12 feet from the home plate to catch the kids swinging. I wasn’t much afraid of a foul ball, because they couldn’t hit THAT hard. The biggest problem was that the kids had a hard time hanging onto the bats. I needed protective gear more than the players.

I’ll run some of those shots later.

Here’s a collection of baseball and softball photos from various leagues, teams and games. I can guess where some of them were played, but everything else about them is lost in the fog. Click on any image to make it larger, then click on the sides of the photo to move through the gallery.

13 Replies to “Cape’s a Swinging Town for Baseball”