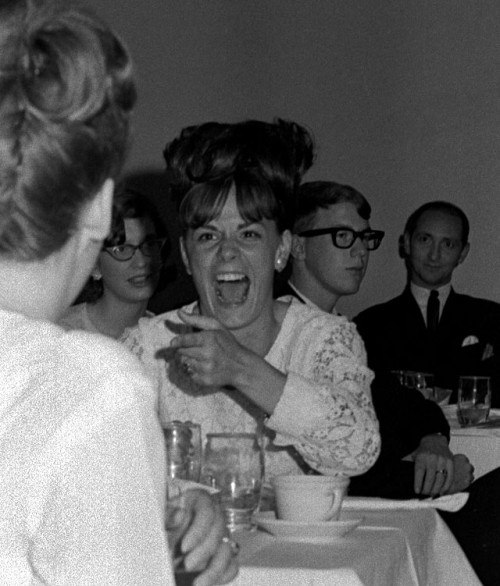 Sometimes when you look at your film, though, you have to ask yourself some combination of the questions:

The assignment above was to cover Cape Central’s Class of 1965 Senior Party. While Cherie Pind is obviously making an enthusiastic point, Sally Wright and Jim Stone, in the background, are totally tuned out to their surroundings. I think that’s Dale Williams in the background with the bemused expression. 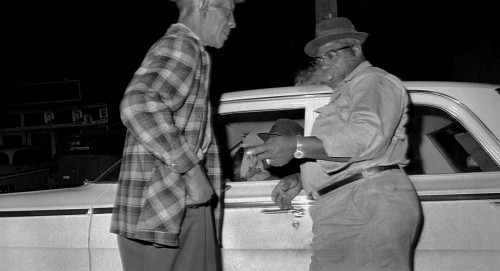 I have a single frame of these gentlemen standing outside the Democratic headquarters in 1964.I was probably there for some kind of political feature.

There’s no context on the roll for why I happened to notice them. I like the guy puffing away on the cigar and the body language of the guy on the left. It would be fun to know what they were discussing.

Different angle or did I trip?

This is obviously a parade of some kind with the Jackson High School Band marching by. I was either trying a different angle; tripped and dropped my camera, accidentally firing the shutter,  or was trying to appeal to the shoe fetish element of our subscribers. Today’s newspapers probably hired a focus group to calculate just how many of the latter there are. That’s why our local paper runs so many stories about shoes.

What prompted THIS reaction? 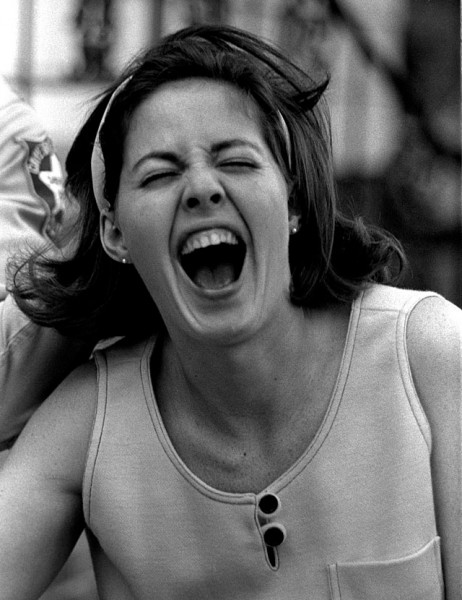 I think this is Marilyn Knehans. I know Jon Knehans is on the left. I recognize his deputy’s patch.

It  COULD have been her reaction if I had asked her for a date. Since I’m sure I didn’t have the nerve to do that, it’s up to you to speculate about what’s going on. 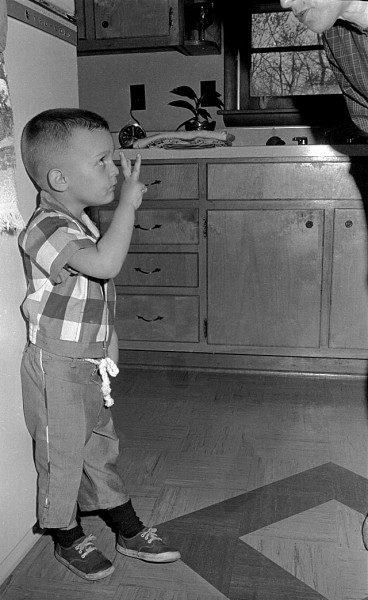 This looks like it might have been taken on a Missourian food feature. I have no idea why the kid is holding up the three fingers or who he’s showing them to. He’s pretty serious about it.

Since I wasn’t good at studio work, I tried to avoid shooting food and other products. I was geeky enough to come up with some ideas of how to make food look more appealing for the guys who DID shoot it. I found some chemicals, for example, that would produce fake smoke that I could pipe into the food to make it look steaming.

Before I found the fake smoke, we used REAL smoke. Real smoke enough to set off the building smoke alarms, which caused a whole bunch of guys with hoses and big trucks to show up. This was NOT a good thing.

Is that a come-hither look? 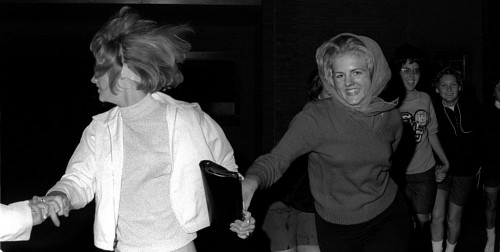 I think this was shot when I was at The Jackson Pioneer. When I looked at the film the other night, I was wondering if the blonde was giving me a come-hither look. Then I analyzed the photo and realized that was unlikely for a couple of technical reasons:

If it truly was a come-hither look, I’m sorry that I didn’t catch it for about 45 years. I was always a little slow on the up-take. 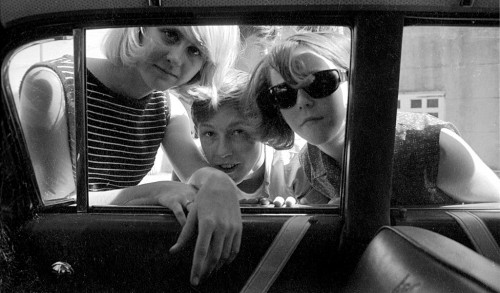 Why these kids are looking at me like some kind of zoo animal, I don’t know. That’s my Buick station wagon they are peering into, but I don’t know what caught their interest. I do note that the door is locked.

See all of those scratches and spots on the lower left side of the photo. I got tired of spotting the flaws and started to pitch it, but then I thought I’d post it as an example of a Before and After shot (see below for the Before).

I decided, instead on writing about the Bald Knob Cross photos because they were better examples of how both cropping AND technical magic could make something out of nothing. This shot, while an interesting spot removal exercise, would never be much more than a record shot. 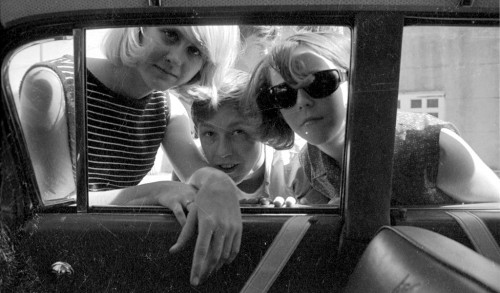 Here’s the original photo after I had adjusted the lightness and darkness of the main subjects, but before I started spotting out the scratches and flaws. If you click on the image to make it larger, you’ll see a big white spot on the chin of the girl on the right and a spidery dust speck on her lips. Click on the left and ride sides and you can rock back and forth to compare them.

In the final version, I had made the headliner at the top of the door darker to keep your eye on the faces and darkened the door frame to try to hide (unsuccessfully) some of the scratches. I managed to eliminate or minimize all of the scratches on various body parts.

At some point, you cut your losses and decide that you’d rather spend more time on pictures that have more significance. (No offense meant, if any of the trio are readers.)

14 Replies to “What’s Happening in this Photo?”