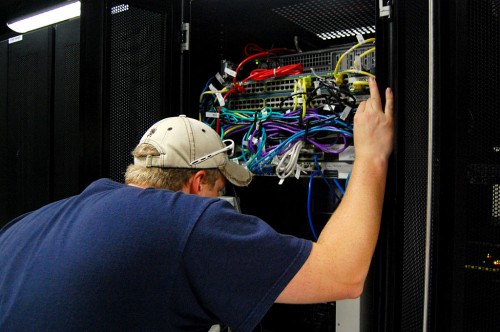 It’s been a challenging few days in the data world. Son Matt maintains my blogs, leaving me to worry about the content side. He decided to move them to a newer, faster, better, spiffier, shinier server.

At about the same time, Son Adam, President/CIO of DedicatedIT (also known as DIT because DedIt sound too much like DeadIT),  wanted to move his company’s servers to a new, more bulletproof hosting center in Miami. He provides managed services to a bunch of companies all over the region. He and his engineers are sort of like remote IT staffs who keep the hamsters turning for companies who find it better to contract for his services than to have their own staffs. 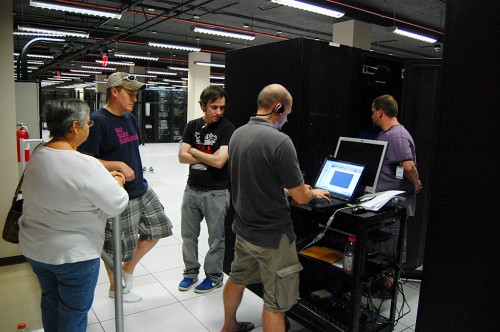 When you have, not only your own business, but all of your clients depending on you, then you have to have as much redundancy and security as possible. That’s why DedicatedIT elected to move its equipment to Colohouse in Miami. The Category Five hurricane-rated building used to be a phone company central office. To give you an idea of how well THEY are built, BellSouth didn’t lose a single central office when Hurricane Andrew ripped through South Florida in 1992.

Does the finger have to be attached? 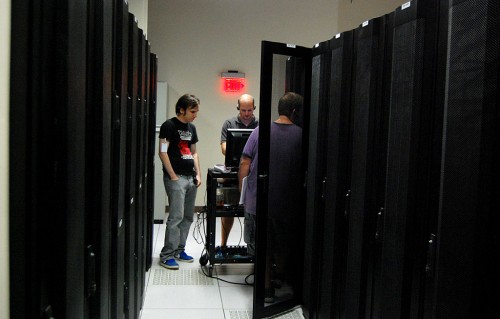 Even though the building is located in a somewhat shaky neighborhood, security is tight. You have to be buzzed into the building by a security guard who is on duty 24/7. Your ID is checked and a photo is taken. You’re then issued a swipe card that will give you access to an elevator that will take you to the floor you are approved for. When you get to the actual data center, you have to have a second swipe card for that room AND have your fingerprint scanned by a biometric reader. (I’m not sure if the finger has to be attached to the body, which gives me a bit of pause.) 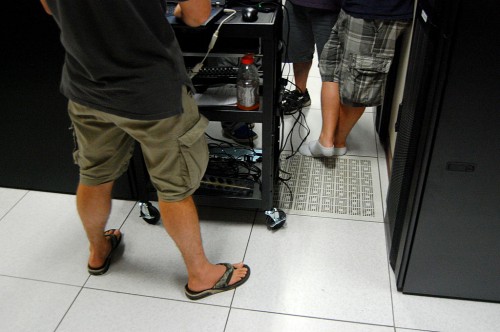 Wife Lila, who is Executive Vice President of the company, was excited about being issued a biometric ID card.  I’m secretary of the company, but all that means is that I get to sign my name a couple of times a year on papers they assure me that I don’t really need to read. I didn’t even get an access card. I think that’s because they want to keep me as far away from the hardware as possible.

A Brazilian bytes of storage 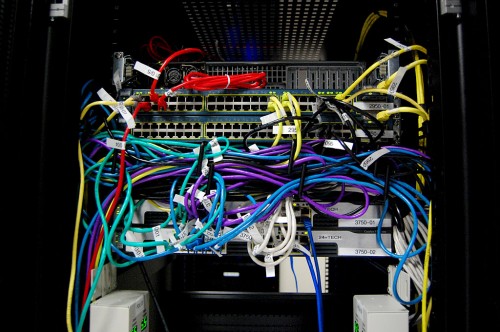 DedicatedIt has a Brazilian bytes of data storage. Well, maybe not a Brazilian, but one of those ‘illion things. It’s got dual power supplies fed by separate circuits coming in from diverse commercial power grids, backed up by building UPSs, backed up by generators.

These guys are connected 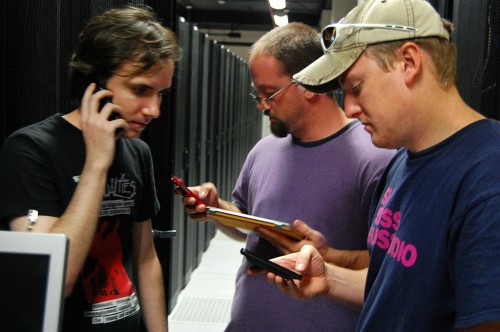 You’re not limited to one Internet service provider: there are more than a dozen carriers in the facility and it’s a landing point for international underseas cables (not that DIT needs that). Suffice it to say that Colohouse has its act together. There are bank after bank of equipment cabinets used by smaller clients like Adam’s, then there are the BIG players who have enough equipment that their racks are surrounded by black chain link fencing. 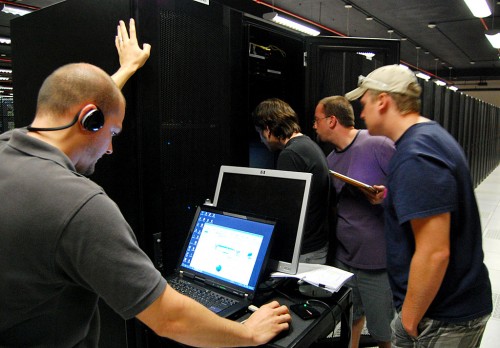 You get what you pay for 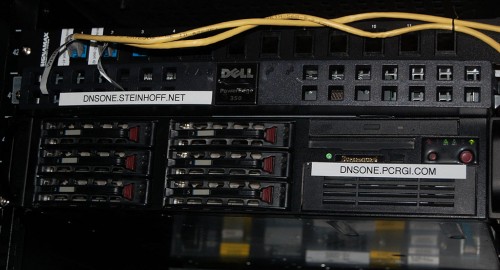 So, if Sons Matt and Adam have it all figured out, why were we down for two days? Well, the first and best answer is that I got the service I pay for. The paying clients had to have their stuff up and running within the middle-of-the-night maintenance window. I got taken care of after the folks who pay the bills. 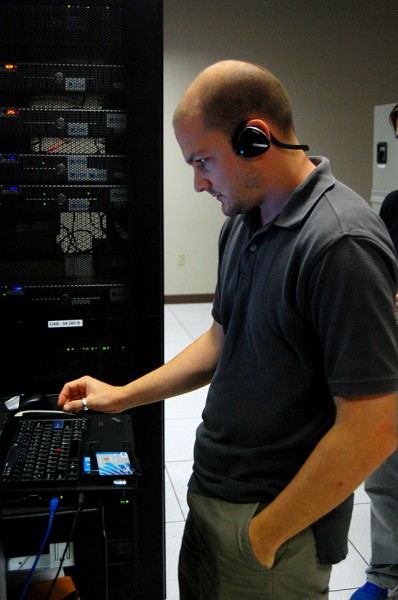 Our part of the process started at 2:30 Sunday morning, when our home was invaded by a horde of techs bearing donuts and a 55-gallon drum of coffee. They needed to borrow our two vans to haul equipment and staff to Miami. In addition to Matt, who doesn’t work for DIT, these folks were involved in the big move: Paul Vedder – Support Engineer; Nick Yastremski – Support Engineer; Ben Posner – Lead Support Engineer; Scott Maulsby – COO, and Aaron Underhill – Account Manager. The guys were so psyched that they practically vibrated, and that was BEFORE they tapped the coffee.

Eventually, the coffee wears off 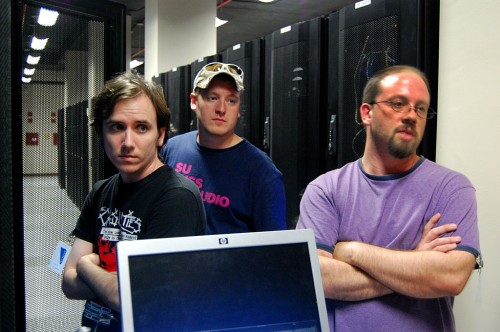 I have seen – and worn – this expression on the morning after a big cutover.

Where ARE those electrons going? 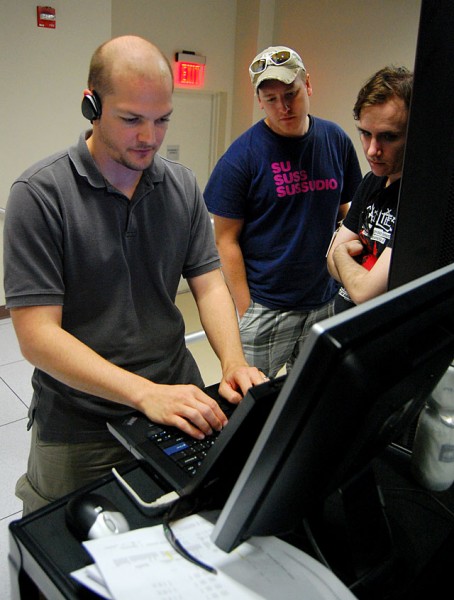 Wife Lila and I were like the generals who came down from the mountains after the battle was over to shoot the wounded. Matt had finished his piece and had headed home.

We drove down to Miami late mid-morning after all the heavy lifting was over. The wires were plugged in and lights were flashing all over the place. Adam was hunched over a laptop trying to figure out why some of the electrons were getting lost getting from Point A to Point B while some of the other guys were standing by with buckets to capture any errant 1s and 0s that escaped. (Well, that’s what it LOOKED like.) 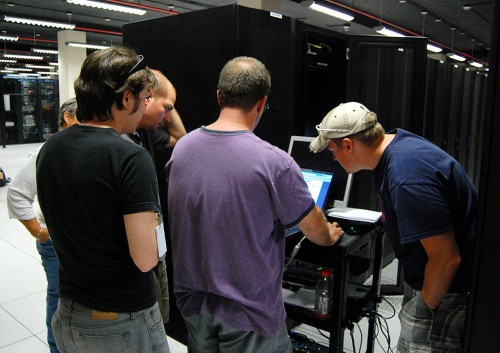 One of the things that made the process more complicated was that they were creating “virtual” servers to replace physical equipment. It makes it easier to administer, is more efficient and doesn’t require as much rack space and power as a bunch of individual computers. 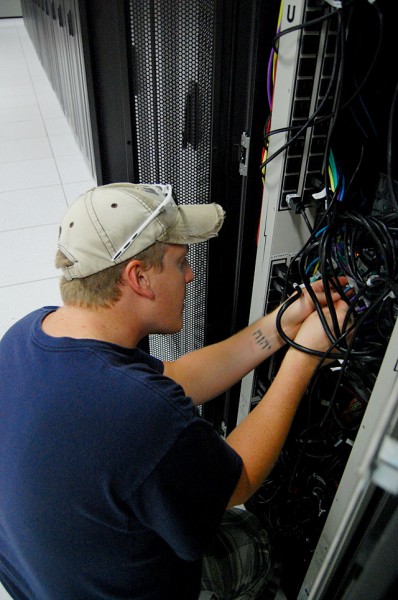 It’s sort of like taking a big subdivision where everybody lives in separate houses and moving all the families into a big apartment building. It takes awhile for all the magazine subscriptions and bills to arrive at the right new address. That’s one of the reasons I was offline. When you change your ip address the word has to go out to DNS servers all over the world (those are the things that tells the computer world that CapeCentralHigh.com is really address 123.123.12.101, not 321.321.21.101).

Just like not all magazine companies get your address changed at the same time, neither do the DNS servers. Comcast, my ISP, was particularly slow, so I couldn’t connect to do updates. It was like the mailman delivering your Playboy magazine to the little old lady next door.

To make matters worse, the person who had my email ip address before me must have been a spammer because the mail I was sending was being blocked at the far end. I had the same thing happen when I changed from BellSouth to Comcast.

The cat licked my monitor

That’s probably way more than you ever wanted to know about why I didn’t have new content for two days. Next time I’ll just say that my cat licked the monitor and erased it.