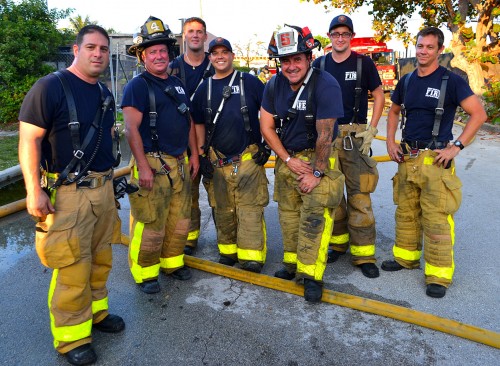 I was running errands when Wife Lila called my cell. “You’re not going to be able to come home,” she said.

I was mentally running down a check list of possible infractions that would be THAT serious when she said, “The building across the street blew up and is on fire. All of the streets around us are blocked off.”

She sure was right about that. The streets north of us, south of us and to our east were all blocked off. OUR street, however, had a tiny gap between two police cars that could just fit my van. I squeezed through and drove all the way to where crime scene tape crossed the street about where our yard begins. As I was walking toward the tape, a cop started walking toward me. “I live at 620,” I said, gesturing to our house.

“Yep.” He waved me through. As it turned out, all of the cops and firefighters who worked the incident were friendly. (Click on any photo to make it larger.)

Wife Lila was busy recording the whole thing with her Canon PowerShot SD1200IS. I was really impressed at how she shot from as many angles as possible, zoomed without making you feel like your eyes were on yo-yos, got some decent cutaways and told the whole story. Based on how well she did with a point-and-shoot still camera taking video, I’m afraid the wrong Steinhoff might have been chasing sirens all these years.

Just about the time I started to download the photos from our various cameras, a reporter from one of the local TV stations rang the doorbell and said he heard on the street that Lila had good fire video. They wouldn’t pay anything, but they DID give her credit on the 11 o’clock news.

When the memory card in her camera filled up, I went inside to get her my Canon FS100 Camcorder. At the same time, I grabbed my Nikon D3100. I wouldn’t have thought it was possible, but I didn’t have any desire to shoot the incident. First off, it was pretty much over except for the cleanup, and, secondly, I didn’t want to get into a hassle with anybody. Those days are over.

Fire pix for the fun of it 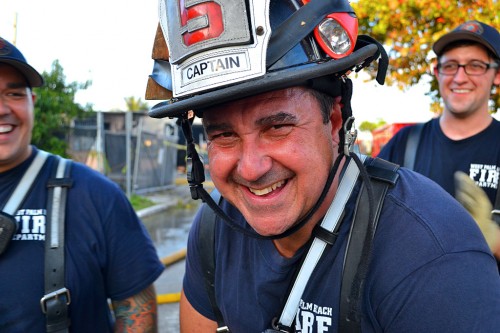 Still, since the guys had been so nice, I went over to them while they were rolling up their hose to see if they’d like a group portrait. They lined up and I knocked off a couple of frames. It reminded me a little of the cliche shot I took years ago of a bunch of firemen (they were all male in those days) posing in front of a burning building that had been set on fire for a drill.

No one was inside the building at the time of the fire and no injuries were reported. The fire is under investigation. It’ll be interesting to hear what the cause was. There has been talk in the neighborhood about a strong smell of acetone coming from one of the bays where the fire appeared to originate. But, like one of the fireman said, “They just pay me to squirt water on it, not to figure out what caused it.”