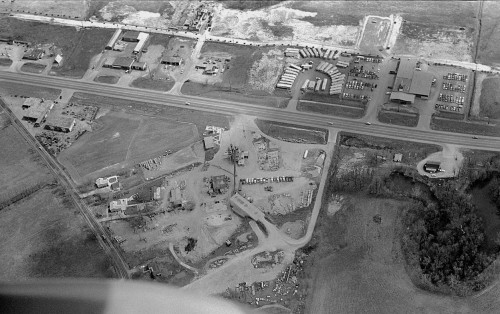 Faithful reader and regular contributor Keith Robinson was in town from Kansas City for a family reunion and suggested that we get together. He was a little young to be on my radar, but he was in Scouts with my brothers and Dad. He’s a great resource because he’s a model railroader who is attempting to recreate a layout of all of Cape’s railroads between Nash Road and Cape Rock. I think he’s accounted for every spike that’s ever been driven in this area.

He came out to the house and we looked at old photos for a couple of hours. He spotted a landmark that I’ve thought about often, but would have sworn I never documented. When I started school and we moved out of the trailer that Dad and Mother hauled from job site to job site, we rented a house at 2531 Bloomfield Road. It was a great house for a kid: there was a flat field west of us that was great for playing catch. A sloping field on the east side had some climbing trees at the bottom.

Best of all for a budding fisherman, The Barn was close enough that I could persuade Mother to take me down to fish in what I thought was a pond, but looks in the aerial to be an oxbow of Cape LaCroix Creek. The Barn, sometimes called The Red Barn, is on the lower right. (Click on the photo to make it larger.)

Cape Ready Mix is center left. Rueseler’s Chevrolet is across the street. Click here to see the Chevy dealership at night from the ground.

I couldn’t find many stories about The Barn as an eating establishment. As I recall, their specialty was barbecue, but I think they also sold watermelon in season. I think they also had fireworks for the Fourth. 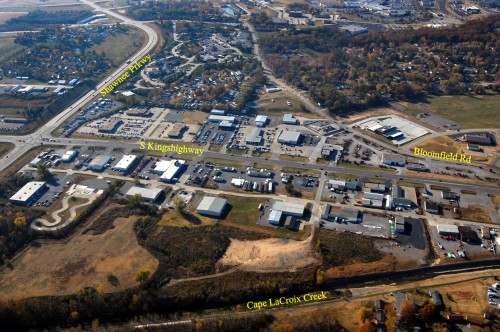 The area looks entirely different. The Barn is long gone. It was located about where the S Kingshighway label is. The shopping mall is in the upper right-hand corner. Southern Parkway, which connects I-55 to the Bill Emerson Memorial Bridge didn’t exist in the 60s. 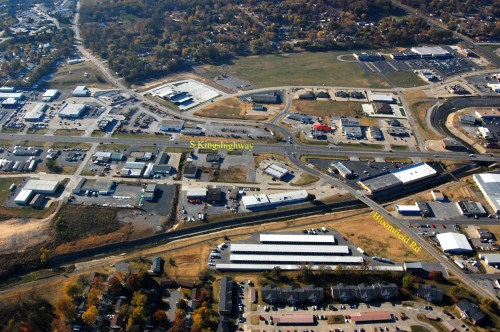 This was taken slightly north of the previous photo and shows the intersection of South Kingshighway and Bloomfield Road. On the far right-center of the photo, where the highway crosses over Cape LaCroix Creek is a small building that I think was Central Packing Company. Whatever it was, it produced the most nauseating stench on a hot day. They had to have been dumping offal into the creek. I’ve often wondered if the current occupants are aware of what the building had been used for.

Even though I didn’t find any stories about The Barn as I remembered it, there were plenty of stories in The Missourian about businesses at that address.

9 Replies to ““The Barn” for Good Fishing”