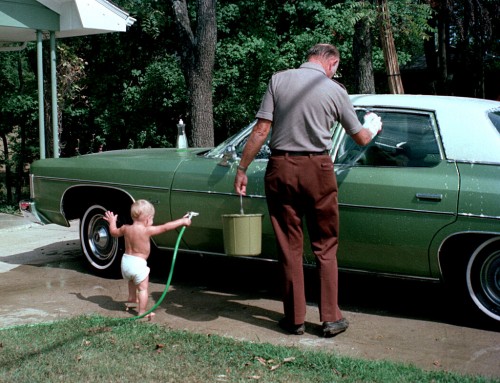 Sometimes I KNOW I’ve taken a photo; I just can’t find it. It’s been a long time since I went wading through the boxes of prints and negatives that are stored in Wife Lila’s domain in the dining room buffet. She’s the custodian of “family” photos. Most of my pictures are of strangers.

My search came up empty, but I did find this envelope of color negatives taken in the special summer of 1976.

Looks like Son Matt was about a year old. Brother David and Diane got married. We went to Kentucky Lake and down to Dutchtown where Steinhoff & Kirkwood kept their construction equipment. You can click on any photo to make it larger, then click on the left or right side to move through the gallery.

I’m jumping the gun a little on the formal holiday, but every day is Father’s Day when the memories wash over you. 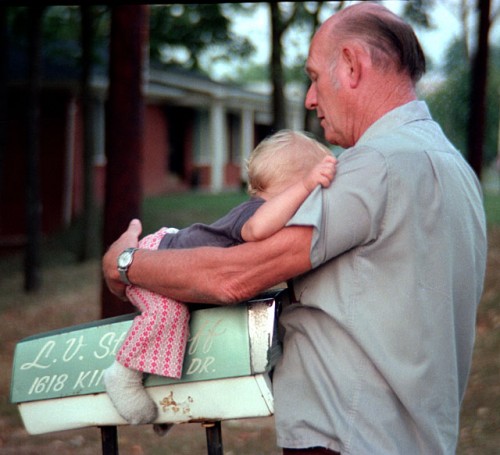 Matt’s not sure he likes the idea of riding the mailbox in front of the house on Kingsway. 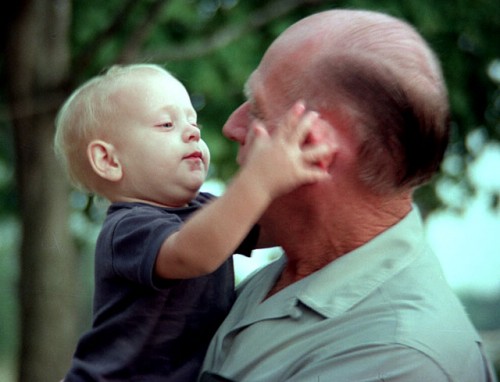 Matt’s trying to figure out what those funny things are sticking out of the side of Dad’s head. 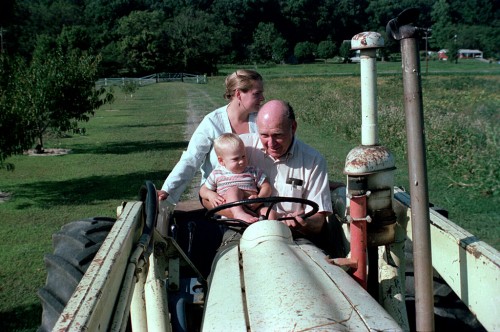 Part of the land at Dutchtown was set aside for a garden and small orchard. The floods have gradually wiped out all of the fruit trees.

Not your normal Tonka toy 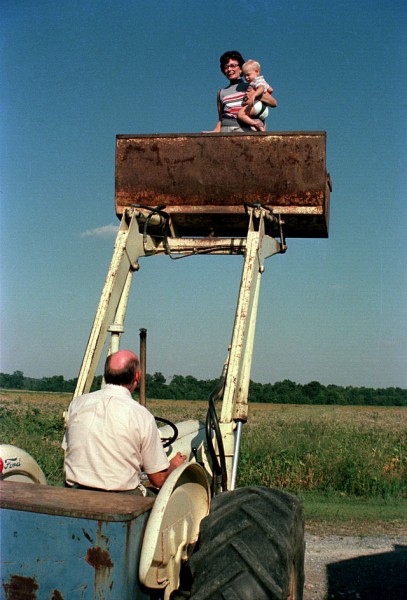 One of the cool things about about having a dad in the construction business was getting to play on the real version of what other kids had in plastic. OSHA would probably take a dim view of this, but we thought it was normal play. You have to admit that not many grandmothers get a chance to do this, either.

An appreciation for different vantages 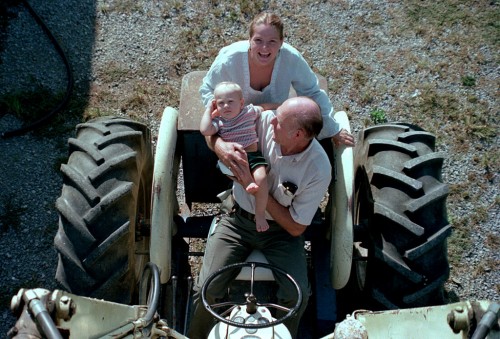 As you can see, if you were in our family, you learned an appreciation for different vantage points.

Were we really that young? 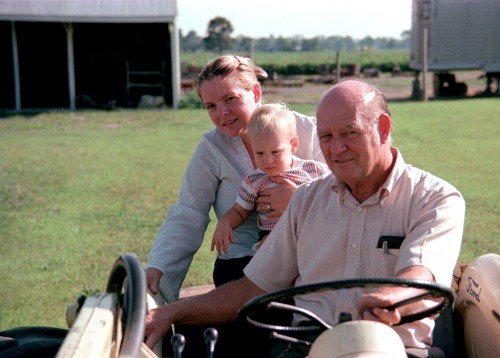 Where have the years gone? Wife Lila and I are twice as old as we were when these photos were taken. One minute you’re holding a toddler; the next you’re cashing your Social Security check. (Which that toddler is contributing to.)

Not quite ready to drive yet 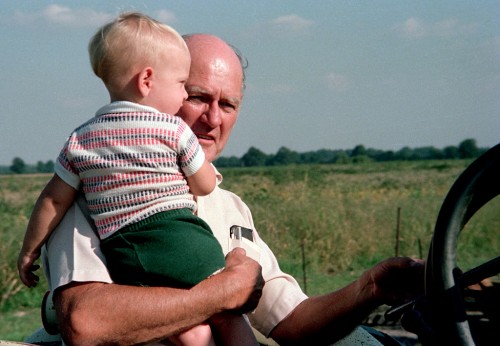 You wonder if a child this young has any real memories of this or if they’re based on photographs and family stories.

Not sure about hay bales 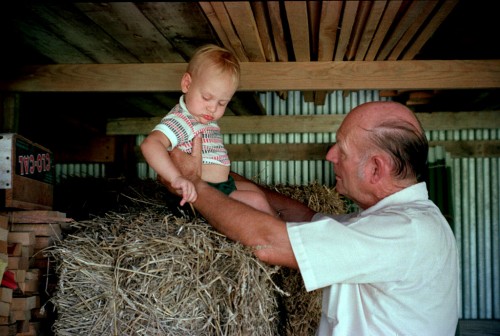 This shed was used to store lumber and bales of hay. Matt doesn’t look like he cares much for sitting on stickery hay bales. Or, he might be trying to figure out if you’re supposed to eat the straw. 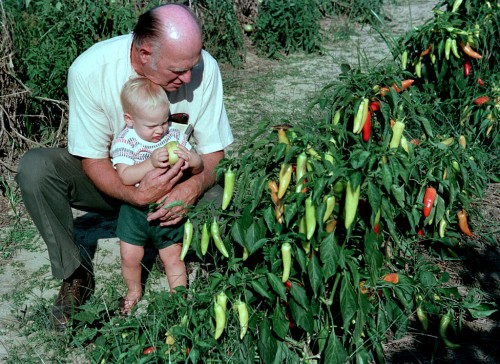 The pepper crop looks pretty good, but Matt is more interested in an apple. 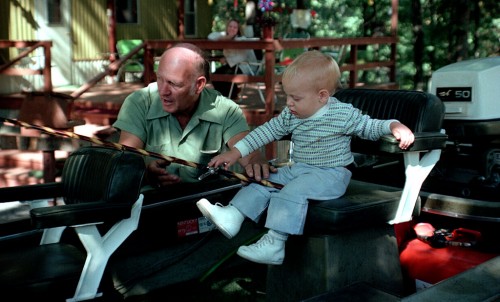 Dad and Mother had a trailer over at Kentucky Lake. There was a bass boat for Dad to use for fishing and a ski boat for hauling Brothers Mark and David around. I skied a few times, but decided that wasn’t my idea of a fun afternoon.

Dad is introducing Matt to the finer points of cane pole fishing.

Duck feeding is more his speed 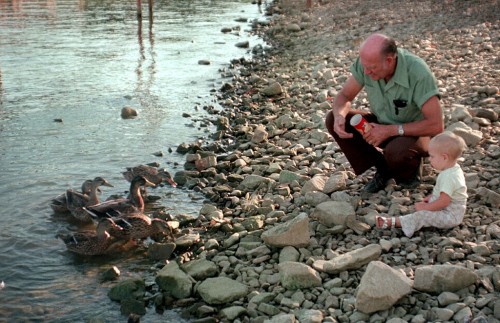 Matt seems to hope that Pringles will be sufficient to keep hungry ducks at bay.

This, my grandson, is a fish 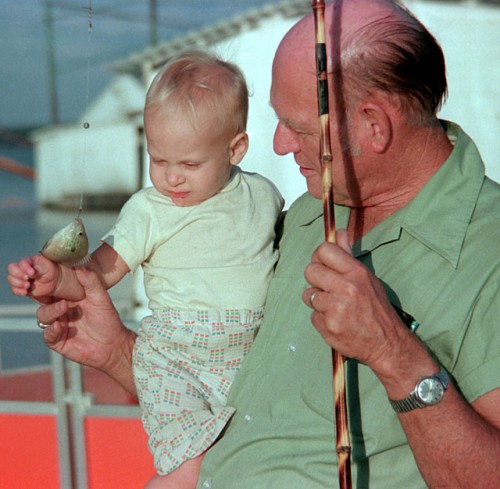 This sequence maybe gives a clue to why Matt doesn’t eat seafood to this day. 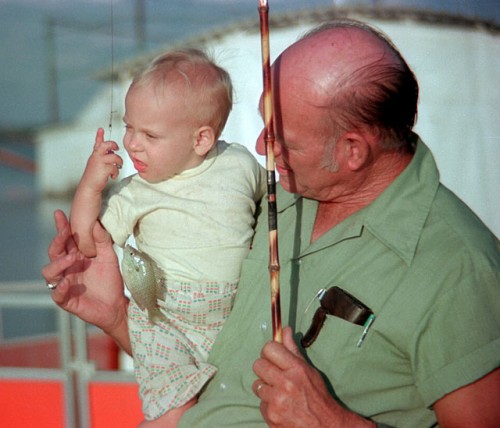 Am I supposed to put it in my mouth? 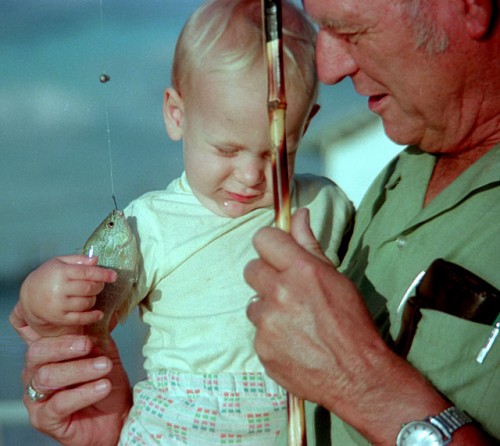 It don’t take me long to look at a fish. I’m done.

Dressed for the wedding 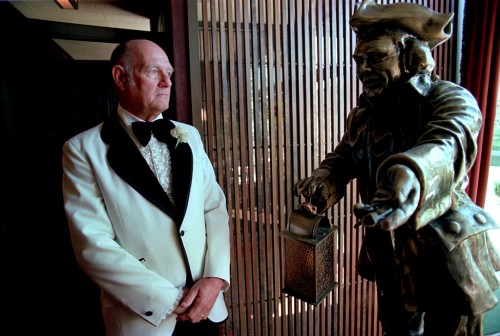 Dad always wore clean and pressed work clothes, even when he was headed to a dirty job on a construction site. He looked good in a suit, too. I don’t, however,  recall seeing him dressed like this many times. The occasion was Brother David’s wedding. 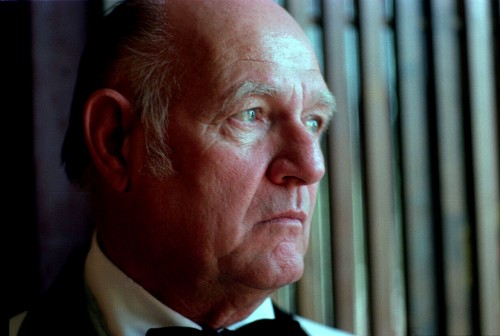 Those sideburns are creeping down pretty far. I guess it was the influence of Mark, whose hair was so long that I gave him a bumper sticker that said, “I’m a Boy.”

Mother and Dad together 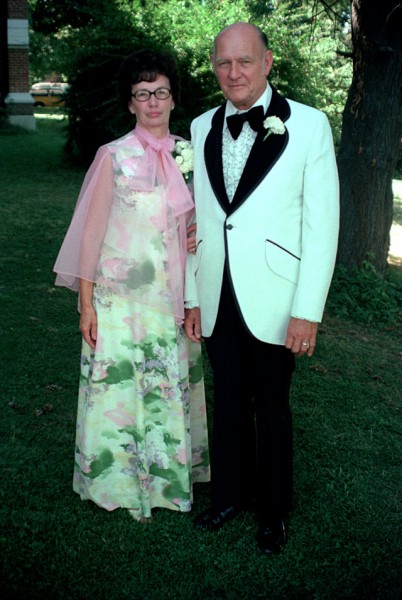 They made quite the couple.

Mark, when he had hair 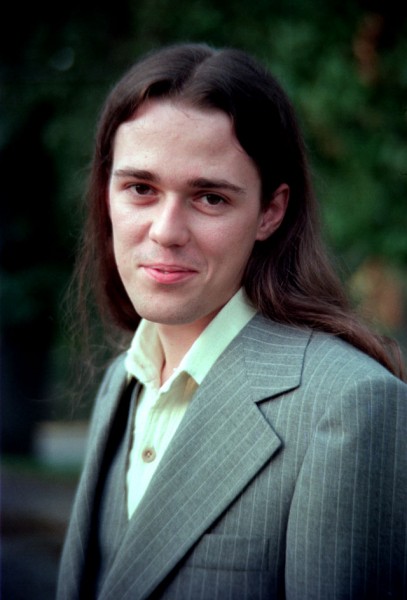 I’m glad he enjoyed it while he had a chance to. 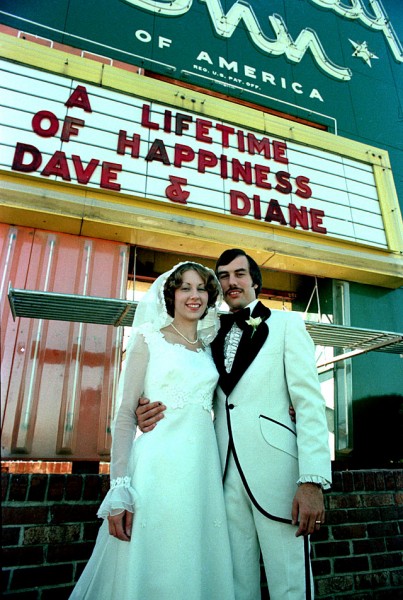 Sister-in-Law Diane looks just like she did as a bride. David, fortunately, DOESN’T look like he did on his wedding day.

A year later, I learned a hard lesson: better pile up all the memories you can when you have the chance.

We had planned to go back to Cape in July of 1977, but my new job as director of photography at The Palm Beach Post got in the way. I had to postpone our vacation a couple of weeks to get the next year’s operating budget out of the way.

Dad was going to use the extra time to build a sandbox for Matt at Kentucky Lake. He must have been carrying a sandbag when he had a massive heart attack. He was 60.

I’m sorry that he didn’t have a chance to see how his grandsons turned out. He’d have been proud of them.

Sorry for indulging in a little more family history than I had intended.

19 Replies to “Thinking of Dad”