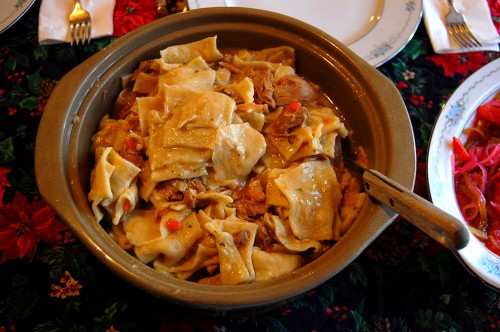 When it came time to plan the Steinhoff Christmas Dinner, the consensus was that we had hit the turkey saturation point after Thanksgiving. Wife Lila said she’d make her Grandma Hoffman’s Chicken ‘n’ Dumplings for a change. I did a video of the tailend of the project (nap magnet, you know) and talked her into sharing how she made them. (They’ve been rebranded Lila’s C & Ds since Grandma Hoffman is no longer with us.) 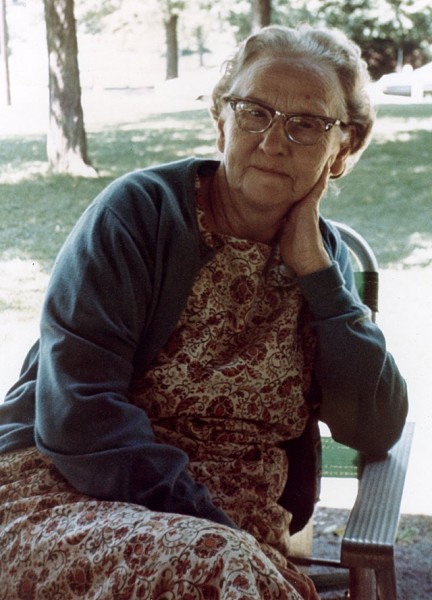 I learned to make chicken and dumplings when I was about 12 years old by watching my grandmother, Christine Hoffman. I stood next to her while she cooked and remembered what she did. Luckily she and I were on the same cooking wavelength, so what she did translated well. I understood ‘a handful’ of this or ‘about that much’ of something else.

The recipe that follows is transcribed from my memory. I never had specific measurements and the recipe was never written it down.

I do the chicken in a pressure cooker for 20 minutes to speed up the process. Cook chicken with about 2 inches of water and add sliced carrots, sliced celery, sliced onion, chopped garlic and parsley. Add about 1/2 teaspoon of salt and a few twists of fresh ground pepper.

(Or if you have the time and patience, you can put it all into a stew pot, cover it with water and simmer it for 2 or 3 hours.)

Once the chicken is done, remove the meat and vegetables with a slotted spoon, so that you have only broth in the pan. Add a carton of low sodium, fat free chicken broth to that in the pot to make about 6 cups of broth and heat to a simmering boil.

In a deep bowl, whisk an egg and one cup of cooled chicken broth. Add flour in small amounts and whisk until mixture becomes too thick to whisk. Use a spoon to stir in more flour until the mixture is a soft dough.

Put a generous amount of flour on a pastry cloth. Place a 3-inch in diameter ball of dough on the cloth and cover it with more flour. Pat the dough flat and flip it several times until it looks rectangular. Flour a rolling pin and very lightly roll the dough thin, about 1/8-inch thick.

Use a pizza wheel to cut the thin dough into dumpling sized squares. Drop the cut dumplings, one at a time, into chicken broth brought to a rolling boil. 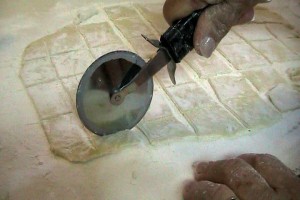 While the first batch of dumplings is cooking, place another 3″ ball of dough on the floured pastry cloth and repeat the process.

When the next dumplings have been cut, use a slotted spoon to remove the first batch of dumplings from the broth into the container with the chicken. Repeat the process until all the dough has been used.

Stir to mix with a wooden spoon. (A metal utensil will cause the dumplings to tear.)

Wife Lila has helped my former food editor coworker Jan Norris with some other cooking projects: