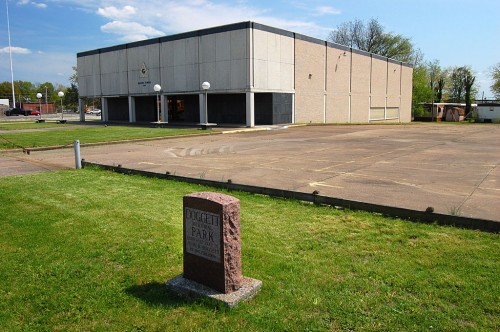 Cape County was given land for two parks with the stipulation that they be developed or the land would revert to the donors. Here’s the partial story of those two parks, both which have links to the Bloomfield Road controversy.

An Apr. 27, 1953, Missourian story that said that “Dr. Sylvester Doggett, who nearly 10 years ago gave the Cape Special Road District a provisional deed for a large tract of land at the intersection of Broadway and Highway No. 61 in Cape Girardeau for city park purposes, told The Missourian Saturday that he had engaged a law firm to bring a suit to have the deed annulled so the property would revert to him because the terms of the contract had not been complied with. 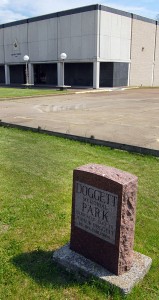 “Dr. Doggett said he had prepared the tract for park purposes before offering it to the township. Drainage and sewer service, electrical facilities and water connections had all been furnished and 40 papershell pecan trees were planted… The township was to develop the tract into a recreation or social park, like the Dennis Scivally Park out on Cape Rock Drive… Very little of anything has been done and the 10-year period is now drawing to a close, so he will go to court to get his land back.

“The tract faces 400 feet on Broadway and is 287 feet wide by 400 feet deep, thus making it total up to over three acres, ample space for such purposes with parking space for 30 or more cars. It is a valuable piece of property, Dr. Doggett told The Missourian, worth at least $40,000 and ‘if the township doesn’t expect to use it, I want it back so it can be used for other purposes.

“A granite marker with the name ‘Doggett Park’ facing Broadway is seen on the property. 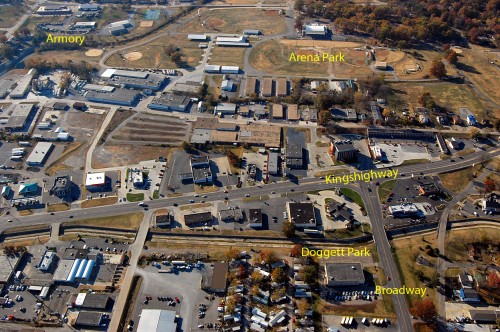 Three years earlier, an Oct. 25, 1950 story said negotiations were underway by the city and representatives of the military affairs committee of the Chamber of Commerce for an approximate three-acre tract of land on Broadway at Doggett Park as the site of a proposed federal armory building.

The armory was eventually built at the corner of Independence and East Rodney. 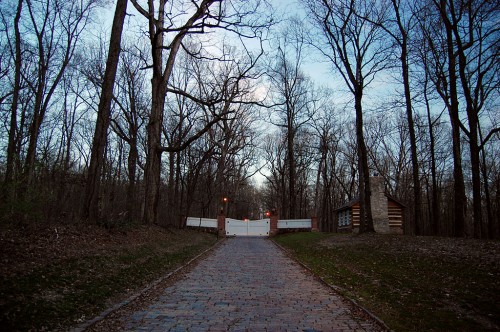 Doggett Park figures into another park gift that was lost.

A front page July 8, 1961, story told of the gift of 10.23 acres of picturesque wooded land at the southeast corner of Benton and Bloomfield Roads by the descendents of the Ramsey and Giboney families to the Cape Special Road District. The gift was for the specific purpose of developing the acreage into a public park.

“Funds are available for the park development program, Lindsay W. Simmons, chairman, said, from the proceeds of sale of the Doggett Park tract on west Broadway to the Masonic Lodge.

“The acreage given by the Ramsey-Giboney descendents fronts 813 feet on Bloomfield Road and 750 feet on Benton Road. It is all in woods and is part of the most scenic crossroads site in this entire area.”

Most scenic crossroads in area 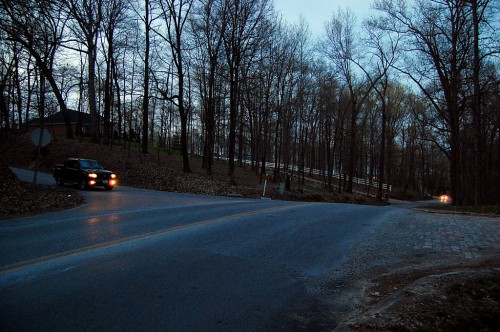 “Trees leading to the intersection of the two roads form a bower over the road, giving it deep shade and an idyllic appearance to the motorist. Even on the hottest of days the drive through the intersection is cool, adding to the physical beauty of the spot.

“The 10.23 acres is said to be the site of Mount Tabor School, which historians say was the first English school west of the Mississippi River. It was established in 1799 by Andrew Ramsey, the first American to settle in the Spanish dominions. He and his family came in that year from Harper’s Ferry., Va., his lands adjoining those of Louis Lorimier, commandant of the Cape Girardeau territory. He was followed by Alexander Giboney and others to form the first purely American colony west of the Mississippi.

“A stipulation provides if the road district is abolished the County County must preserve the property for public use and if it fails to do so the ground will revert to family heirs.”

What happened to the park?

May 5, 1978 – Cape Girardeau County Court has ordered all county parks closed from 10 p.m. to 6 a.m. in initial effort to curb problems resulting from night-time drinking parties being attended by teenagers; action was taken after Sheriff James J. Below brought to court’s attention party last weekend in Mount Tabor Park which was attended by about 300 people, many of whom were under age of 21.

Aug. 1, 1983 – Cape County Court today agreed to vacate the Benton Hill Road near the former Mount Tabor Park. The park, located just off Bloomfield Road, west of Cape Girardeau, reverted to private ownership earlier this year after the Cape Special Road District said it no longer wanted to maintain the park. Now that the property is no longer a park, County Court Presiding Judge Gene Huckstep said the court agreed to vacate the the county road which leads to the property.

Questions about the parks

It’s possible that these questions were answered in stories I didn’t find, but it’s worth posing them in case someone else knows. 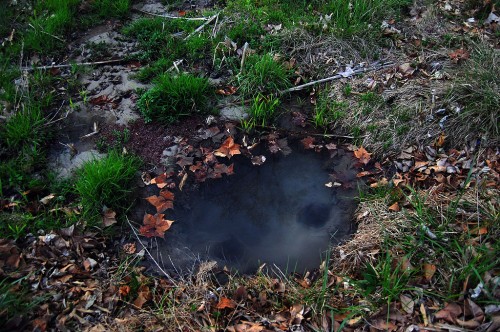 The 1966 Cape County Parks and Recreation Commission survey listed pleasure driving as the second most popular recreation in Cape County. Lee Enright, the landscape architect quoted in the story, said that at least 35 miles of scenic drives should be available to the public by 1985. He classified Bloomfield Road and Cape Rock Drive as existing scenic drives, totaling 13 miles. He also listed the Ten Mile Rose Garden between Cape and Jackson as a possibility.

I find it ironic that the Ten Mile Rose Garden was wiped out when Highway 61 was widened and that the trees that “form a bower over the road giving it deep shade and idyllic appearance” could disappear when Bloomfield Road is “improved.”

See yesterday’s story about a planning meeting being held May26.