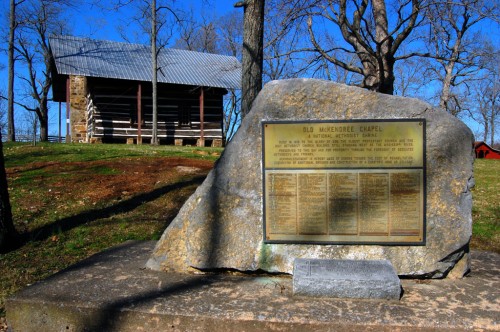 It’s hard to say why Old McKendree Chapel has always been a special place for me. Mother was a Methodist when she was growing up in Advance, but she moved over to the Lutheran side of the fence when she married my dad, so that’s not it. 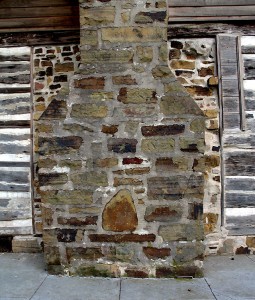 I never attended any of the chapel’s camp meetings or services, but I still find myself drawn there almost every trip.

When I got my Schwinn bicycle when I was 12, my world expanded to include rides to McKendree Chapel over roads that were mostly gravel. I can remember maxing out the speedometer on the steep downhill run leaving the chapel. I think my mother must have had to give special attention to my underwear after that trip.

When I was in high school, I rented a bicycle built for two and took a date on a ride to the chapel. It was our last date. The rule of thumb is that two things will challenge a relationship: riding a tandem bicycle and hanging wallpaper. If I’d have given her the wallpaper test, I could have saved some serious pedaling. 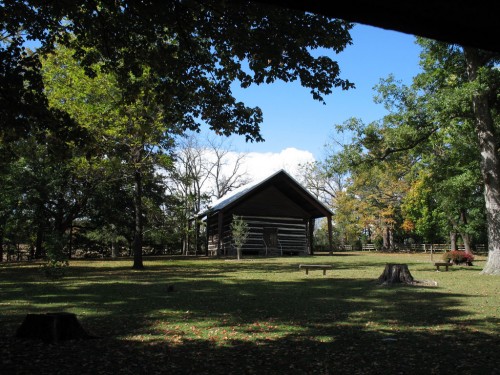 The chapel site was used by church circuit riding ministers as a meeting place to exchange information and plan for the westward expansion of Methodism as early as 1806. It was built in 1819;  the local circuit resolved in 1869  to repair the building, not to replace it with a new chapel.

In 1933, the McKendree Chapel Memorial Association was founded to preserve the building. It was one of the first preservation groups in the state.

Which is the REAL chapel? 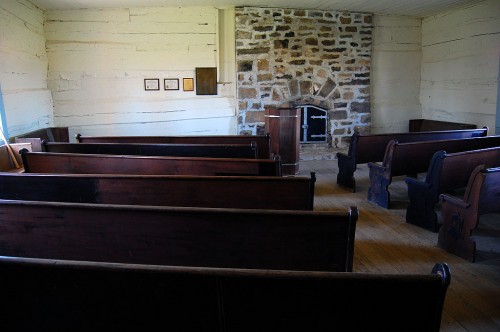 I don’t want anyone to think I actually know all this stuff. Like Wife Lila says, you don’t have to know everything, you just have to know where to find it. I get a lot of my info from Missouri Department of Natural Resources list of National Register Listings. 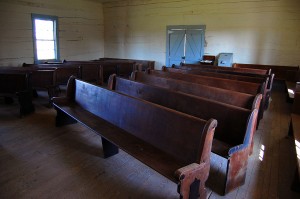 If you scroll down to the McKendree Chapel listing, you’ll find all kinds of interesting stuff. It’s a large file, so you may have to right-click on the file name and then select Save As and open it later with Adobe Acrobat.

One controversy is whether or not the chapel, with its exposed square log walls is the “real” version of the chapel, or if the building’s authenticity was damaged when weatherboard siding that covered the logs was removed in 1977. When I look at photos that are part of the National Register application, THAT is the church that I remember from my childhood.

I KNEW that there was something different about the building, but I didn’t know exactly what it was.

Good arguments can be made for both the weatherboard facade and for the bare logs we see today as being the “real” chapel. 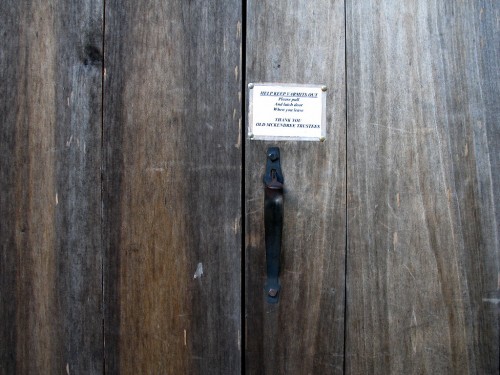 One of the things I’ve always liked about the chapel is that it’s unlocked. There’s a locked grate over the fireplace inside to keep someone from building a fire, but a simple latch secures the double front door.

On my last visit, I decided to go inside to reminisce and to shoot some fresh interior photos. After I finished, I tried to open the door. It wouldn’t open. It’s supposed to open inward, but there was no door pull to give me any purchase on the door.

The Methodists did WHAT to you?

I tried sticking my knife blade into the crack between the doors, but no luck. I debated trying to take the door off its hinges, but didn’t want to take any chance of causing damage. After struggling for several more minutes, I was ready to admit defeat. Darned Methodists. This is an insidious recruiting technique. Once they get you into the church, you’re captured for good.

My mother was waiting outside in the car. I dialed her number hoping (a) that she had her phone with her and (b) that she had it turned it on. Fortunately, (a) and (b) were true, and after a sort of confusing conversation, “The Methodists have done WHAT with you?” she went after the caretaker who was mowing the church lawn. He opened the door from the outside and agreed that an inside door pull might be a good idea. He denied any kind of religious plot.

On the south side of the road leading to McKendree Chapel is a small, peaceful cemetery with stones in very good condition for their age.

The oldest legible tombstone is for William Hooser, who died at 11 years, nine days, in 1821. The National Register application says local tradition says that he became ill and died during the 1821 camp meeting of the Methodist congregation and became the first internment. 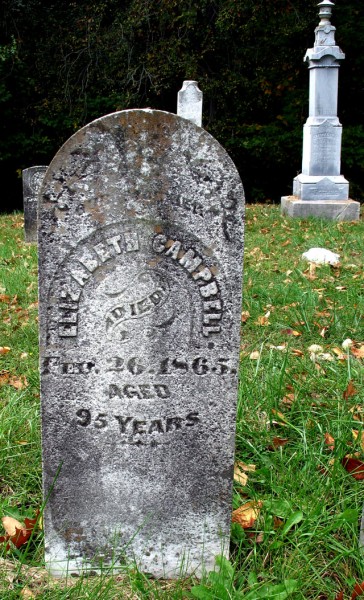 I didn’t see William Hooser’s stone, but I did see the marker for Elizabeth Campbell, who died Feb. 26, 1865, at the age of 95. Just think, I was standing next to the remains of a woman whose life spanned the American Revolution AND the Civil War.