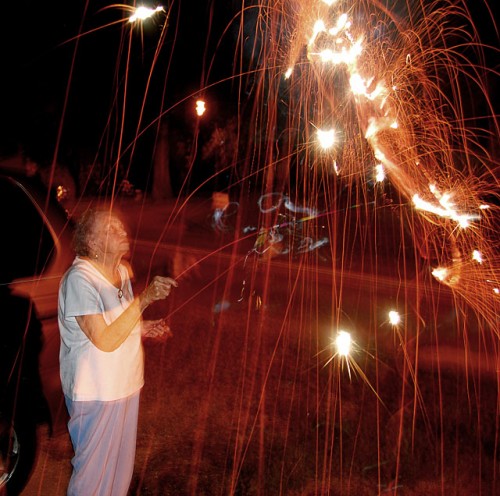 It’s either the 4th of July or Cape is being invaded. The economy might be shaky, but you wouldn’t know it by the amount of money being blasted into the sky all around us.

I spent most of Monday in Cairo with a production company that is doing a documentary on the town. They had seen my photos of Cairo, wanted to use some of them and wanted to interview me roaming around town shooting more pictures. Nice folks. I’ll post some stuff later, but I don’t have time to do it tonight. This is the last Fourth of July photo I’m going to run until next year, I promise. 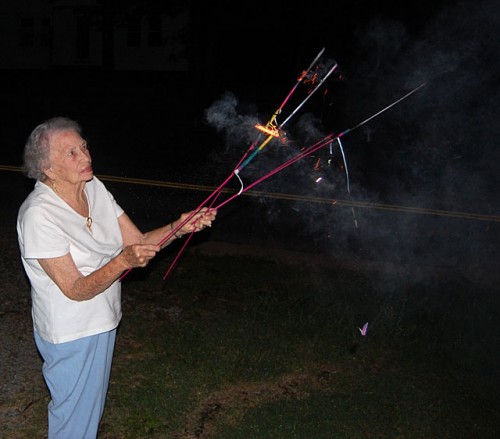 My fancy Nikon strobe needed new batteries and I was too lazy to go in the house to get new ones, so I put the Nikon  D40 in full auto mode so it would use its built-in flash for this photo. The little flash did a pretty good job of lighting Mother. The color balance isn’t bad and the short blast of light stopped the action and produced a reasonably sharp photo.

And, that’s the problem. It’s DULL and sharp.

The photo at the top of page is technically flawed because I wasn’t using a flash that offered more controls, but it’s a good start. Here’s how I shot it and why.

She SAID it was an accident

I was standing in the front yard wearing a pair of sandals when Mother gave her Morning Glory a particularly vigorous shake, more like a whip. The flaming, sparking, cracking tip went flying off, aimed directly at my bare toes. Only quick reflexes and dance steps I never did before saved me from having toasty toes and a trip to the emergency room.

She says it was an accident, but I’m wondering if that’s not a subtle hint that it’s time for me to think about heading back to Florida.

8 Replies to “How to Shoot Fireworks”