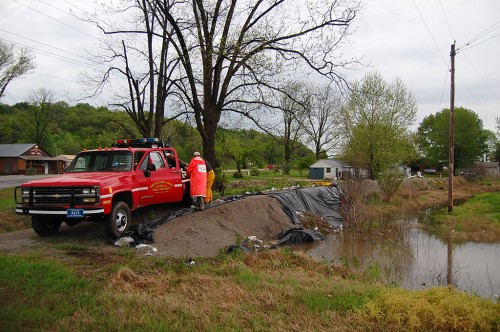 I was planning on getting out of town around noon Monday (which really means around 2 PM). I piddled around waiting for the rain to break so I could load the car and getting a couple of posts ahead on the blog so I could send updates from the motel room along the way.

By the time I got the car loaded, I still had to drop some stuff off in town, so I opted to leave early Tuesday morning. I’m glad I did because the weather was lousy from late afternoon through the evening.

Water’s almost up to Hwy 74

Someone posted on Facebook that Hwy 74 had water almost up to the road. That meant that our property in Dutchtown that I mentioned yesterday might be starting to flood. On the way down to check on it, a state trooper at a roadblock told us that they’re starting to build a levee across the road ahead, so we’d have to turn around.

We took the back way around through Jackson and down Hwy 25. Just as we were pulling into town, we noticed that several houses had tractor trailers backed up in the driveways. They were packing up.

Mother stayed in the car after I pulled into the lane leading to our spot. I walked back up to 74 to see the Fruitland Fire Department setting up a pump on the corner and having a hard time getting it started (more about that later).

Owners trying to fight the water 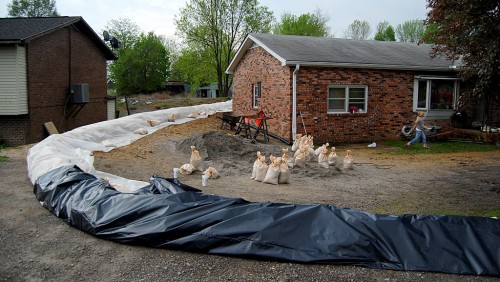 Most of the activity was around one house directly north of our land. Several of the neighbors had built a makeshift levee between us and them several years back. When Mark, Robin and I were there Sunday, we commented that it didn’t look like it had been maintained since the last flood.

We wondered if anybody would start getting excited once the water was visible in the fields. 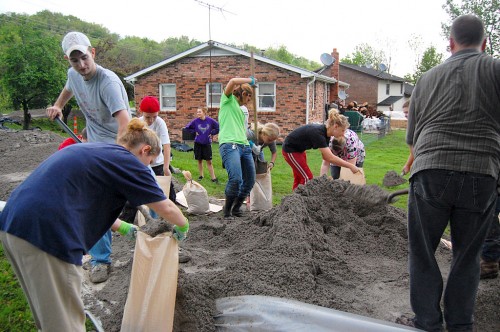 A raft of high school-age kids were filling sandbags and adding to the height of the barrier. I hope it does them some good. We don’t have anything left that the water can hurt much after the 1973 and 1993 floods, but I feel sorry for families who have something to lose. 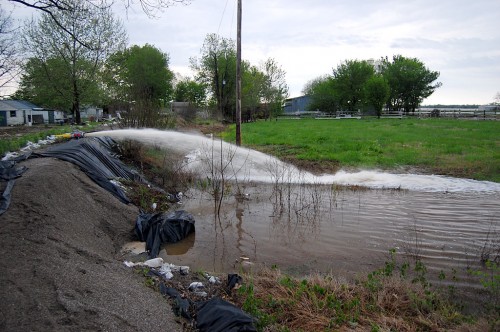 On the way back to the car, I saw that the fire department had gotten the pump going.

I know that we’re going under water. I can’t blame the Diversion Channel, the Mississippi River or Mother Nature for that. I WAS a bit put out to see someone deliberately pumping water on us, though.

At least they’re trying. I wish ’em the best. I think Dutchtown is going to go the way of the Red Star District, Smelterville and Wittenberg. At some point, there will be one flood too many.

6 Replies to “Dutchtown Gearing Up for Flood”