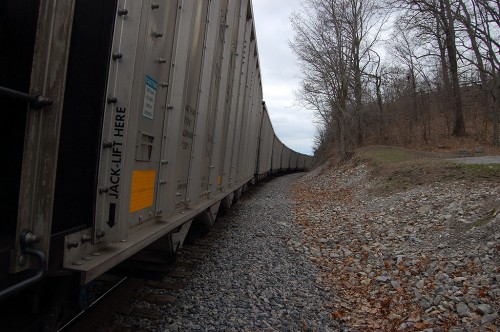 Cape Girardot or Girardeau, founded on Cape Rock, was once an actual cape (a strip of land projecting into a body of water). Sometime in the early 1900s, it was decided that a railroad was more valuable than some rocks sticking 0ut into the Mississippi River, so the promontory was cut to allow tracks to be laid.

The feat was accomplished in time for trains to be able to journey to the World’s Fair in St. Louis in 1904.

This string of rail cars loaded with coal was parked on a siding March 15, 2010, when I drove down to see how high the river was rising. This is looking south from the small parking area on the north side of Cape Rock. Cape Rock is on the right. 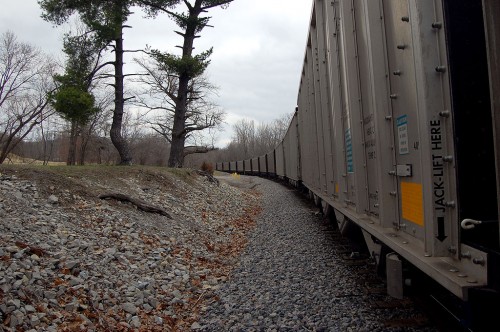 This shows the track curving to the north, in the direction of Twin Trees Park. The 2009 Tour of Missouri passed by here last summer.

Cape Rock in the Fall 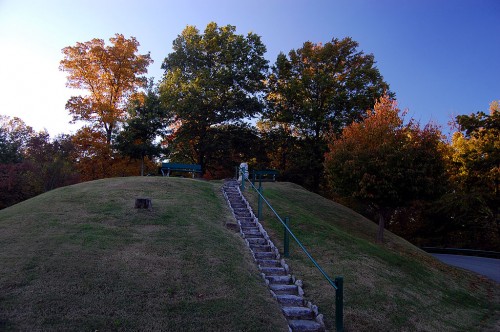 It’s pretty easy to see why Louis Lorimier decided to move Cape Girardeau a couple of miles to the south where the land was flatter. This was taken on a beautiful late October afternoon in 2009. One piece of bad news: there’s a sign that says the park is closed from 11 p.m. to 6 a.m. 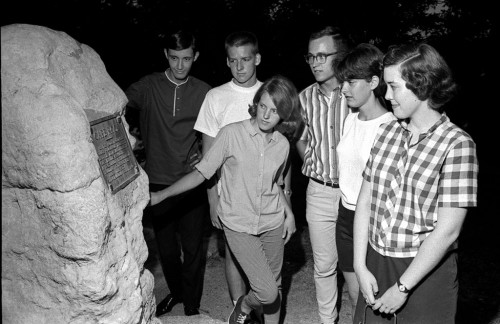 Here’s a photo of some unidentified students with the Cape Rock monument taken sometime in the late 60s. There was nothing written on the film envelope, so I’m open to guesses.

The photo was shot with flash, so it must have been taken late in the day (I don’t do EARLY in the day if I have a choice). They’re wearing short-sleeved shirts and a couple of them have on shorts, so it’s warm weather or they’re a hardy bunch.

They’re doing that photographer-directed, stare at this rock and pretend to be fascinated thing, so something that passes as news is probably being committed here.

Anybody here know these folks?

One Reply to “Cape Rock, Old and New”