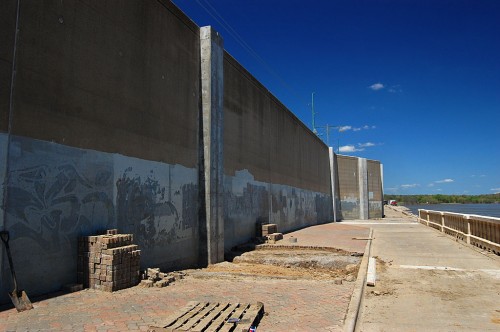 When I walked the Mississippi River waterfront on April 12, 2011, I noticed some repairs being done to the floodwall. It looked like some vertical concrete columns had been added and that they may have extended down to the footers. It didn’t make enough of an impression on me to shoot more than a few record shots. 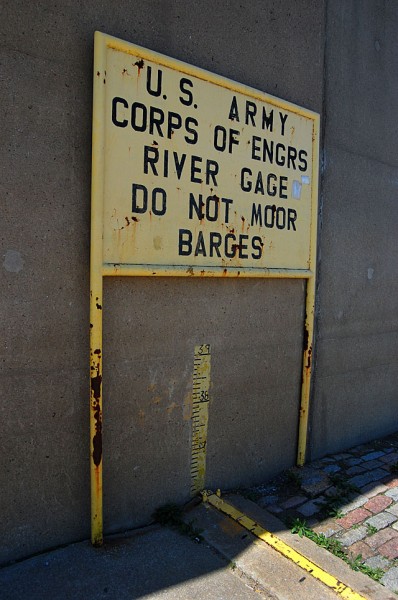 The river was high on this day – 29.65 feet – but it was a long way from showing up on the old Cape river gauge. The Themis flood gate closes at 36 feet; Broadway’s a little higher, so it’s open until 38 feet.

At 39 feet, the Diversion Channel backs up and floods parts of Dutchtown. When it hits 42 feet, over 100,000 acres are flooded, according to the National Weather Service website. 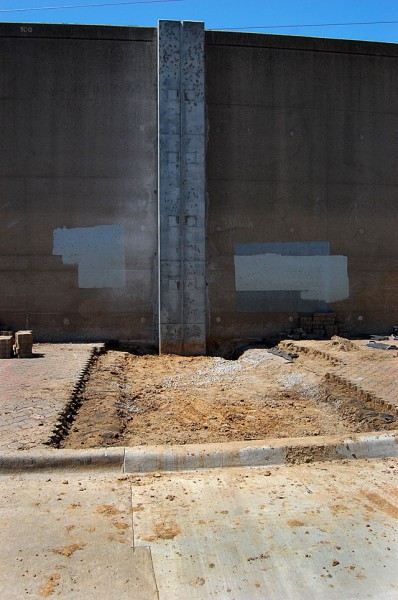 I must have missed the May 1, 2009, Missourian story that announced that the Cape Girardeau floodwall repair project could be finished six to 12 months ahead of schedule thanks to $4 million that was part of the federal stimulus bill approved by Congress in February.

The total project to replace a sagging section of wall, install expansion joints, replace drains, upgrade pumps at Mill Street, add more rock to prevent erosion, pump grout under the wall to stop seepage, and some other incidentals was going to cost about $10 million.

Predictably, there were the normal grousing comments:

“…thanks to the federal stimulus bill…Yeah, they had a few extra bucks laying around that they were kind enough to share. So sweet! That 6 to 12 months gained will take years for our kids to pay for. Thanks kids!” 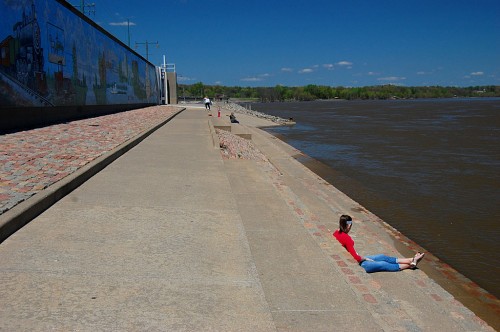 The work I saw was the tail-end of a project to cut expansion joints in the wall. I missed seeing an eight-foot section of the wall taken out. Fred Lynch captured a photo of something not seen since the 1960s – a clear view of the Mississippi River from near Independence Street through the missing panel.

The section that was replaced was near where the wall jogs out in the first photo.

The story quoted the area engineer for the Corps of Engineers’ office in Jackson as saying, “that section needed to be replaced. It had suffered some shifting and something was certainly not right with it.”

Fred’s photo was taken Dec. 6, 2010. Had the stimulus money not sped up the work, that questionable section could have still been in place (or open) when the river hit its fourth highest ever recorded stage of 46.09 feet on May 2. Had it failed, that $4 million would have been a drop in the bucket to what the losses would have been. 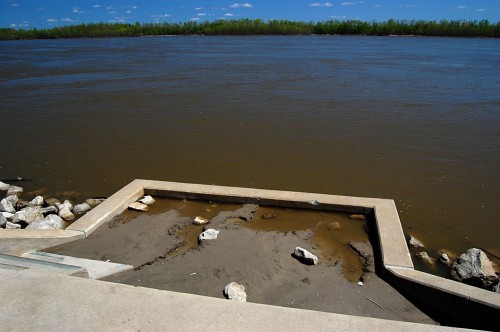 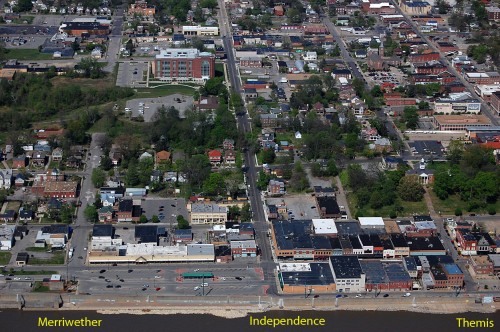 You can see the expansion joint work as the light-colored vertical pieces of the floodwall. The defective section that was replaced is where there’s a slight jog in the wall at the foot of Independence Street. As always, you can click on the image to make it larger.

The new Federal Courthouse is the large brick building to the left of Independence at the top of the photo. Across to its right, at Themis and Frederick, is Trinity Lutheran Church. The picture was taken on a Sunday, so the parking lot is full. The Common Pleas Courthouse is the green area up the riverfront from Themis.

Downtown in the 70s 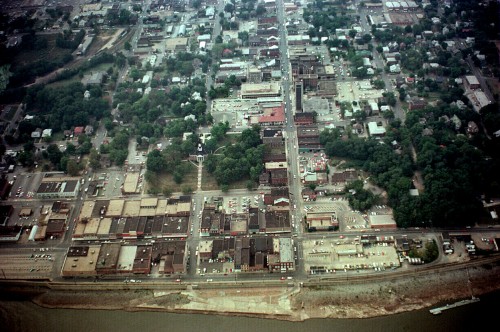 The KFVS tower, Missourian building and N’Orleans are in the right center of the photo. The land where the courthouse will be built is mostly empty, although you can still see the curve of the railroad tracks where they tied in with Independence at Frederick. The light-colored object in the river on the lower right is the Huckstep fueling dock.

Downtown in the 60s 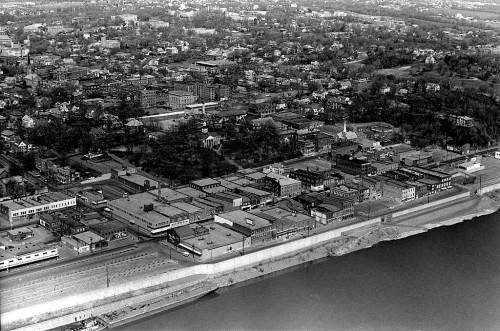