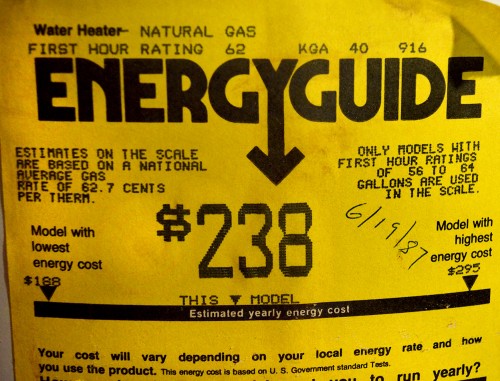 No, I’m not in trouble with Wife Lila. Well, I MIGHT be, but that’s not the topic of this post.

For the past five, maybe even ten years, Mother’s water heater in the basement has been making strange banging and clanging noises. Guests have been alarmed, thinking someone is breaking into the house or maybe a gaggle of deranged raccoons is running amuck in the basement tangling with a posse of possums.

Goggle said the noise was caused by pieces of sediment stirring around in the tank.

I’ve noticed recently that the water that used to be scalding when I washed the dishes was only slightly hot, and that my showers had to be cut short if I didn’t want to have ice cubes coming out of the shower head. My theory was that there was so much sediment in the tank that there was no longer room for water.

When I took a close look at the heater, I saw a scrawled note in my handwriting that said, “6/19/87.” I’m pretty sure that pushing 30 years old indicates that we got our money’s worth.

I know better than to touch plumbing. If I go to change a simple washer, I can expect to see the city start digging up the street in front of the house. I opted to have a guy who knew what he was doing hook it up.

The pro arrived with the heater, tools and a bunch of pieces / parts. He had a challenge breaking apart fittings that had lived together happily for three decades. At one point, I reached up to the tools hanging on the workbench. “Want a hammer?” A few minutes later, I asked, “Want a BIGGER hammer?”

“One of these,” he said, holding up a goofus firmly attached to the end of a spaghetti of pipe.

Well, there was a serious Noah’s Ark thunderboomer sitting right on top of the house. My Low Fuel light came on somewhere the far side of Thebes yesterday, and now the needle was sitting on E. This was NOT a good night to run out of gas, so I filled up in a driving rain and slopped through deep puddles of water to Menard’s plumbing section where, uncharacteristically, there was an employee restocking the shelves. Maybe this won’t be so bad after all.

“This is between me and a hot shower” 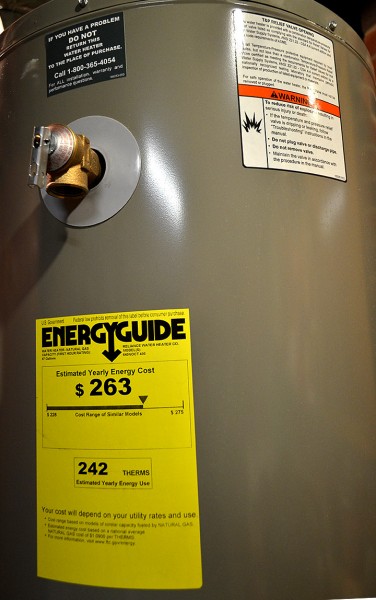 Holding up the widget, I said, “This is what is standing between me and a hot shower.”

She cast her gaze on the woofuspus, and said, “It’s a half incher.

“I don’t like to discuss size, so I’ll let you be the judge. I would have guessed at least two inches, but I’m a guy.”

She turned to the shelf and started to reach into a bin.

Next, out in the rain to Lowes. Uncharacteristically, there was a guy in the plumbing section restocking shelves. I held my whangus up in the air, he looked at it sadly, shaking his head, then walked down the aisle directly to a replacement 1/2-inch whifflebobble.

I waded through puddles again, handed my guy the whosis, and he finished assembling the plumbing puzzle and put fire in the hole.

The next morning, there was no water on the floor, I couldn’t smell gas, and I wasn’t dead from carbon monoxide poisoning. You can’t beat that with a stick.

Shouldn’t this be more efficient? 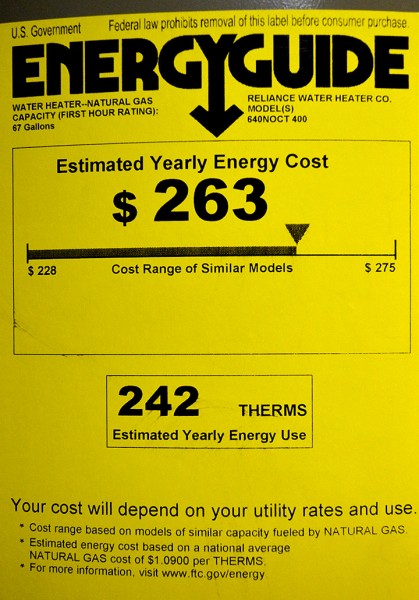 I was confused by the yellow Energyguide stickers on the old and new heaters. The 1987 sticker said the estimated yearly energy cost was going to be $238. The new one, supposedly more energy efficient, was going to cost $263. What gives?

The old adage, “The big print giveth, and the small print taketh away” held the answer.

In 1987, the estimated rate was based on a natural gas average price of 62.7 cents per therm (whatever that is). The 2016 estimate is based on an average national price of $1.09 per therm.

Whatever it costs, a warm shower is worth it.