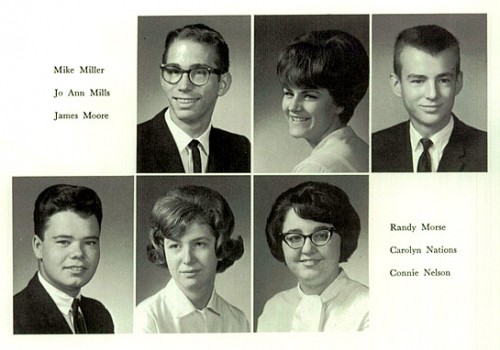 I read Facebook to be amused, distracted, annoyed and to keep up with real and virtual friends.

Today, however, I was stopped in my tracks by a post by Lois Seabaugh: “To members of the class of ’65 at Central High School: A dear childhood friend of mine died on Tuesday October 7, 2014, in his sleep of an apparent heart attack. His name was is Randy Morse. He was one of the guys who bought an old hearse and took a trip to Florida. He was a great friend and a fun guy. He had been a lap swimmer for at least 36 years. I talked with him at least 3 mornings a week at the lap pool at HealthPoint Fitness for many years. RIP dear friend.” 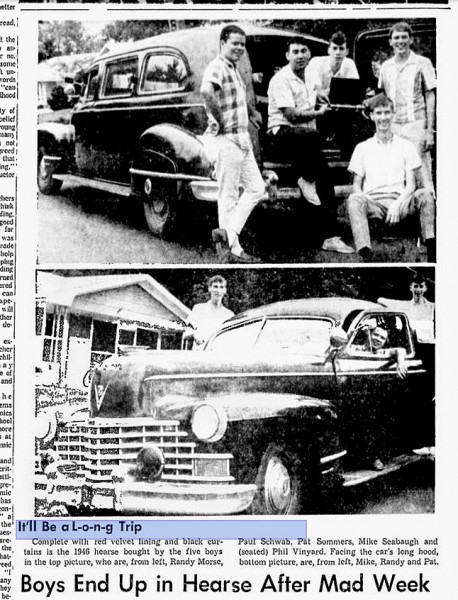 I’ve been looking for the photos of the old hearse Mike Seabaugh, Pat Sommers, Randy, Phil Vinyard and Paul Schwab bought for $76.50 for a trip to Florida, but they are so far missing in action. When I saw Lois’ post, that hearse story was the first thing that popped into my mind. Fortunately, I was able to find the May 24, 1965, Youth Page story in The Missourian. The photo was taken in front of Mother’s house, so I know that means the negs are someplace.

It wasn’t easy putting the deal together 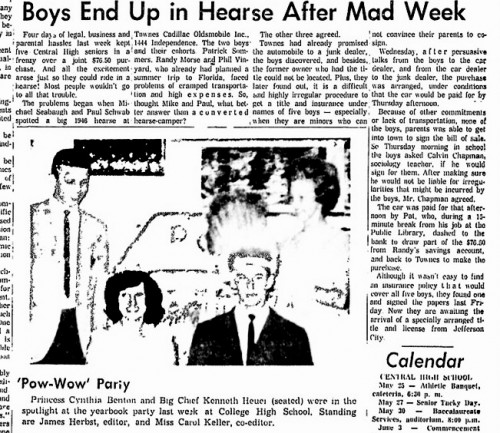 The 1946 hearse was headed for the junkyard when Mike and Paul spotted the beast. Overcoming legal, financial and insurance issues took some serious juggling, with an assist from Teacher Calvin Chapman. If you have trouble reading my scan of the Missourian story, go here to read it in its original form.

Boys made a good impression 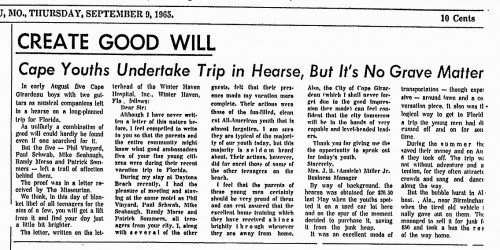 The Missourian ran a front-page letter to the editor from a Winter Haven, Florida, woman who praised the five Cape boys as being “good ambassadors” of our community, calling them “fun-filled, clean-cut American youth.” You can read the September 9, 1965, letter here.

There were quite a few posts made on the Growing Up In Cape Girardeau fan page. I asked for permission to publish these comments.

Lois Seabaugh: Randy always got to HealthPoint Fitness just before.the doors opened at 5:00 a.m. He would swim laps until about 6:00 a.m. and when he left he would always say goodbye to the ladies in the 6:00 a.m. pool class (he was so funny, he would bow and bid us goodbye with a big smile and a wave as he went to the locker room.

Pat Sommers: Randy was a good friend for a long, long time. I remember when we won the KGMO Name that Tune Contest. He had the answer and I made the call from the Dairy Castle and got though first. We won in dollars the AM call number (can’t remember the amount, but less that $100). We took our winnings and went the New Orleans and had a $1.00 coke and then down to Woolworths and had banana splits — big spenders.

Randy, Paul Schwab, Phil Vinyard, Mike Seabaugh and I did buy the 37 Cadillac Hearse near the end of our senior year (1965). Had a blast around Cape and then took it on a 16-day odyssey to New Orleans and then to Daytona Beach — I believe these stories are still classified. There was a follow-up story in the Missourian based upon a letter the paper received from a couple of really nice older women we met at the hotel in Daytona Beach. They thought we were such nice young men — made our mothers feel really good to read it – and relieved at least some of their concerns. I will miss Randy – he was a great guy.

Lois Seabaugh: His sense humor was great. Some of the things we talked about during his early morning laps was how much he enjoyed doing laps at the Central Pool during the summer. One year there were some long-term repair issues and he had to use the indoor lap pool at HealthPoint Fitness. One morning during that time period he said, “Lois Ann, I really like this pool but I miss watching the sunrise on the Central Pool, but most of all I miss that early morning collection of bugs left over from the night before.”

We had a good laugh and I apologized for our lack of bugs in the water and reminded him that he could see the sunrise through our wall of windows, and I promised to ask our manager if I could bring a handful of bugs for him. He loved a good laugh and for weeks on end he would ask me when I was going to deliver the night bugs for him. RIP to my childhood friend, Randy Bill Morse. He did his pool laps until his last day on earth! 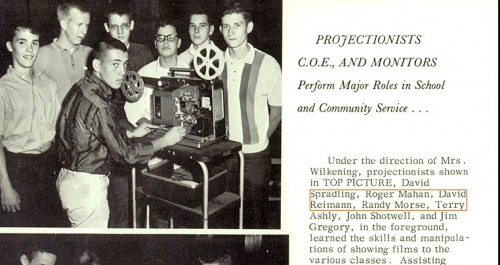 You can read the full obituary which has funeral arrangements at the Ford And Sons Funeral Home website. This is a much better than average obit. My compliments to the writer.

Randy William Morse, 66, of Cape Girardeau, Missouri left this part of his life on Tuesday, October 7, 2014 while resting comfortably at his home waiting for the Cardinals game to start. He was happy and he was loved, and his passing will change neither of those things.

Randy was born October 20, 1947 in Cape Girardeau to Claude E. “Pete” and Helen Margaret Layton Morse, both of whom preceded him in death. Already a precious son and brother, on October 20, 1972 he celebrated his birthday by (as he said) “marrying up”. Barbara Jordan would spend the next 42 years with his unwavering love and adoration, as often the recipient of a loving embrace as that of the most beautiful flowering weed he could find on his morning walks. Loving his family was important to him. Even more important was that they knew it.

Randy’s work was far from done when he left. He was well known in Southeast Missouri for his work in many area pharmacies. Almost every day for over 30 years started with a mile swim in the pool. He conquered or destroyed every golf course in the area and caught a few largemouth bass as well. He was proud to be a member of LaCroix United Methodist Church.

He is survived by his wife, Barb Morse, who is cherished by all but was never loved by anyone else the way Randy loved her. His son Erik and his wife Andrea will be in Columbia hugging, kissing and chasing Oliver and Amelia who will always love their Tops. His daughter Emily will continue to share their love of swimming, dogs and each other. And of course his perfect match of a sister, Sandy Burton and her husband Don of Wickliffe, Kentucky, will continue to know how loved they will always be by Randy Bill. Many nieces, nephews and cousins are also missing his infectious smile.

[Editor’s note: this photo in the 1964 Girardot says that Randy was in the picture, but it doesn’t look like him to me. Thoughts?]